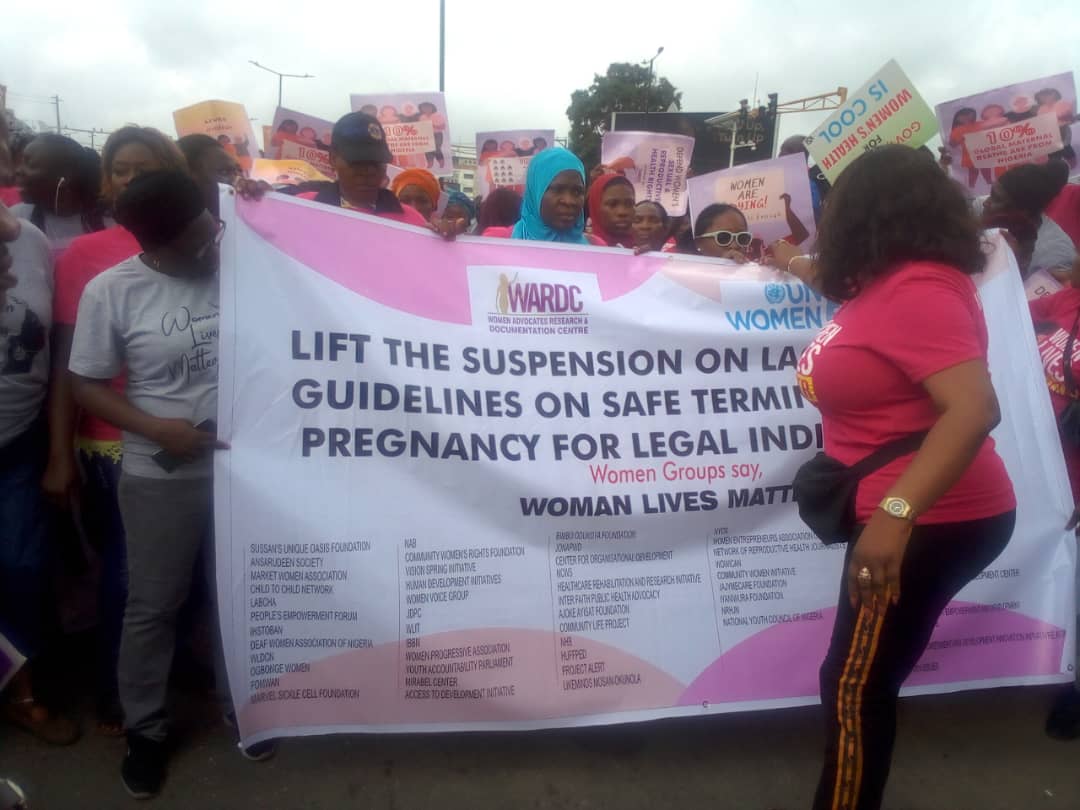 Share 0FacebookTwitterWhatsappEmail
Kindly share this story:
Hundreds of women today 23rd of August 2022, marched to the Office of the Lagos State Governor Babajide Sanwo-Olu at Alausa, Ikeja, protesting the suspension of safe abortion.

It will be recalled that the women on the 22nd of July 2022, had threatened to take up space at the government secretariat if Sanwo-Olu did not immediately lift the suspension on the Guidelines on Safe Termination of Pregnancy for Legal Indications. The women had given 10 days ultimatum and today, they made good on the threat.

A statement, which contained the warning and threat of the likely protest was signed by 150 Women’s Rights Groups and Civil Society Organisations on that fateful 22nd of July.

The protesters gathered at Obafemi Awolowo Way, Ikeja, under the bridge and from there marched to Alausa, to urge Sanwo-Olu to lift the suspension of the Lagos State Guidelines on Safe Termination of Pregnancy for Legal Indications.

Speaking at the Alausa Secretariat, Akiyode-Afolabi said: “In a bid to avoid unsafe abortion, we came up with steps that we must take and conditions which safe termination of pregnancy can be done if the woman has a kidney problem, cancer disease and other health-threatening issues. After it had been adopted, the governor sometimes in June came back to suspend that guideline and we are aware that that suspension was based on political reasons. We are saying that women are dying in Lagos State. We feel women’s lives matter and that the Lagos State Government should not play politics with the life of women because we are aware of the 2022 election that is coming in February.”

Akiyode-Afolabi further stated: “It is important that Lagos state government takes steps to ensure that it secures the lives of women. We are out here because we believe the suspension is not fair to women, and it is going to cause more death for women. The Guidelines were supposed to be a decision a doctor can make, which is a standard medical procedure.

The doctor can decide to terminate the pregnancy in a safe environment and atmosphere. We gave 10 days ultimatum to the Lagos State government that we are going to gather here to demand that a woman cannot continue to die needlessly in the state.

The women who are seated here in large groups have different experiences and are just lucky to be alive. Several women don’t have that opportunity to be here. We feel the government should be sensitive to the needs of women, so we decide to pick this matter up. This has nothing to do with any religious ethics. It is important for the public to understand what exactly is being said by this law. The law is not in any way contravening any law in the country.

Addressing the women groups, Director, Civic Engagement Matters, Mr Ayodeji Haruna, said: “We attend to issues of protest, requests, made to put across your views to Mr Governor. The Special Adviser is not around. She is out on official assignment and Mr Governor is engaged on other pressing issues.  The way you carried out your request and demand are very encouraging.

“When you were at the entrance gate of the secretariat, we were equally there with the officials from the ministry of health, where you lodged your complainants and request. When we heard that you were coming to the governor’s office, we also rushed out to meet you. I want to state that the Governor will be informed of the maturity you all demonstrated in making your request.

As we have collected the document containing your request, it behoves the office of civic engagement, to go through it and make it a policy paper and make a presentation to the government on your request. On whether someone else would be coming from the governor’s office to address, I cannot assure you because I do not have the mandate to go in there.

However, the workings of civic engagement are to ensure that when issues like this come up, we should quickly engage to ensure your request is escalated to the governor. I want to assure you that within the next 24 hours as we return to our office, we would make sure that we push to the Special Adviser (SA), who will in turn push to the governor. Fortunately for us, the SA is a woman. Women are everywhere., even in the secretariat, women have taken over. Look at the list of permanent secretaries, we have more women than men. At the head of the service, we have three sets of women consecutively. My prayer is that after Mr Governor, a woman will become the next governor.”