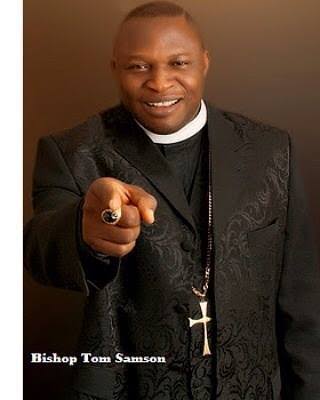 Share 0FacebookTwitterWhatsappEmail
Kindly share this story:
The founder of Christ Royal Family International Church, Bishop Tom Samson has said the church is declaring war against all the forces behind insecurity in Nigeria.
The charismatic preacher was speaking with journalists at his church’s headquarter at Egbeda Lagos on Thursday on this year’s edition of his annual programme tagged, “IT IS WAR”.

He said, “At this year’s programme, we will be dealing with all the enemies of our nation, the power behind insecurity. We will launch war against evil plans of the enemy on individuals, their businesses, their professions.

Indeed, God raised me to set the captives free. Some people have asked, why war? It’s not a physical war. The Bible says the weapons of our warfare are not canal, but they are mighty though God, pulling down the stronghold.

Many will recall that the “IT IS WAR!” programme started in Lagos about 18 years ago at the Lagos Airport Hotel. Lagosians woke up one morning to see the streets of Lagos flooded with posters of the man of God in military camouflages, ready to declare war against all satanic activities in the land and free God’s people from all shackles of satanic captivity, oppression and poverty. It was a huge success.

“IT IS WAR” has recorded boundless testimonies ever since its inception. “It has raised men. It has transformed lives. We have impacted people’s lives. And many of these people, in turn, give back to the ministry.

People have often wondered where we get the money to do things we do like expansion, creating more branches, rehabilitation of roads, and so on, it is from the kindness and generosity of those whose lives have been transformed by the church. Many of our members who had problems traveling o the United States, UK, Canada, they are now citizens of these great countries. The concept of “IT IS WAR!” is to break the yoke of the devil over people’s lives.

The programme starts on Sunday, 7TH of August, 2022, at Lagos Airport Hotel, (Oranmiyan Hall) off Obafemi Awolowo Way, Ikeja, Lagos, by 3pm prompt. The remaining days of the programme will run from 8th to 13th of August, 2022, at the Royal Tower, 2 Adegbola/ Tom Samson street off Obafemi Road, Ikeja Along bus-stop, Ikeja, Lagos by 6pm. The very last day, of the programme, will be on 13th of August and it will start by 8 am at same Royal Tower. This year’s edition of “IT IS WAR!” has been declared against satanic oppression, hardship, sickness and diseases.