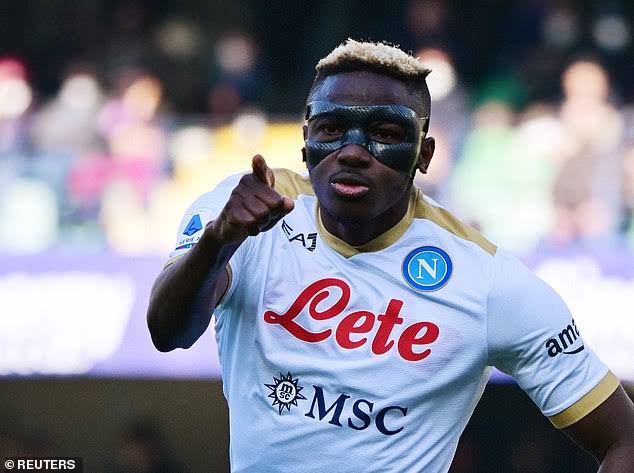 After launching an investigation into the racial abuse hauled at Nigeria international Victor Osimhen by some fans of Hellas Verona, the Italian Serie A disciplinary commission has fined the club the sum of €12,000.

Napoli travelled to the Stadio Marcantonio Bentegodi on Monday for their opening fixture of the 2022/23 Serie A season, in what was an entertaining goal thriller encounter.

The Gialloblu tried to match the Partenopeans but the gulf in class was glaring as the victors emerged winners 5-2.

The opening day fixture was however marred by racist chants aimed at Osimhen from some sections of the home fans.

A section of the home support launched monkey chants at the Super Eagles striker, the latest episode of racist chanting at Verona, who have a long history of far-right sympathies among their hardcore support.

The 23-year-old, who kept his cool throughout the game, however, had the last laugh after taunting the Verona fans on scoring his side’s second goal. The Nigerian also assisted the fifth, laying on for teammate Matteo Politano to poke home.

Osimhen mocked the fans by pretending to cry into the camera as he celebrated his goal with his teammates.

Meanwhile, according to an Italian publication, el grafico, the league’s disciplinary commission found the home side guilty and has hit them with a fine.

“Hellas Verona was fined €12,000 for considering that it allowed its fans to carry out racist chants against the player Victor Osimhen, from Napoli, during the match between the two teams for the first date of Serie A of Italian football.

“After the first day of Serie A 2022/23, an investigation into Hellas Verona-Naples was opened with the Federal Prosecutor’s Office, which considers it necessary to clarify and identify those responsible for the first racial discrimination choirs against a Napoli player.”