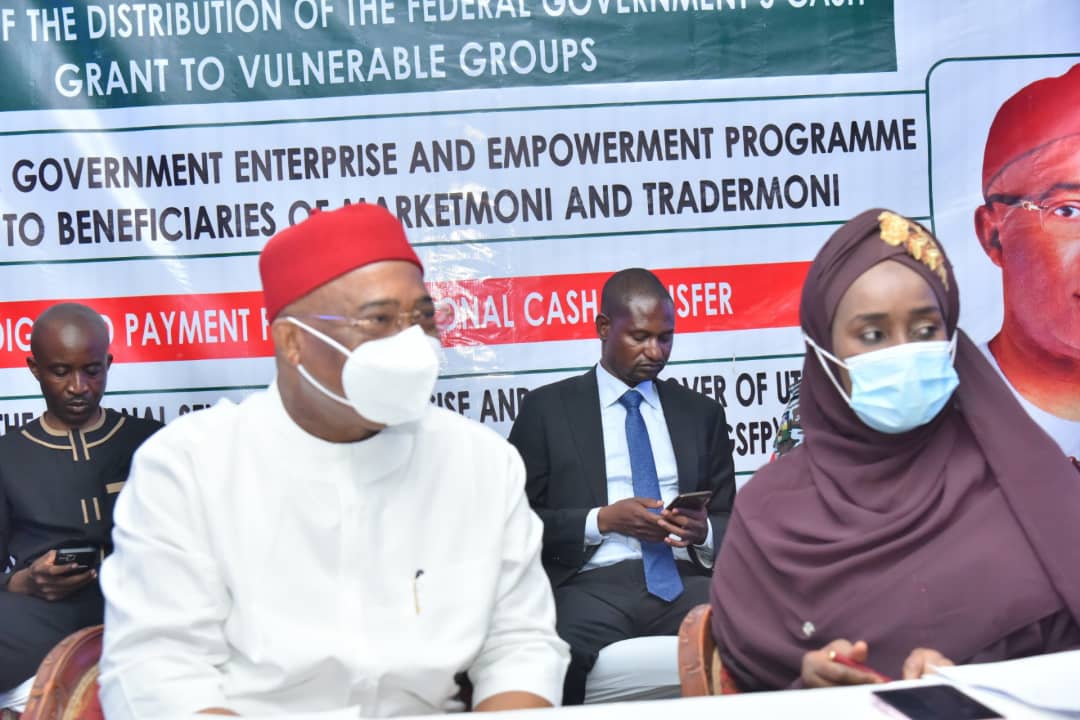 The Governor of Imo State, Sen Hope Uzodimma has solicited the inclusion of more citizens from Imo State who should benefit from the Federal government’s different social empowernment programmes.

He did on Saturday when he joined the Minister of Humanitarian Affairs, Disaster Management and Social Development, Hajia Sadiya Umar Farouq who was in the State to flag-off various social empowerment programmes organised by her ministry for Imo citizens.

While commending the Minister and her team for finding Imo State worthy of the social empowernment programmes, Governor Uzodimma used the opportunity to make case for the addition of more Imo citizens as beneficiaries in the different programmes of the ministry which the Minister acceded to.

Speaking at the Sam Mbakwe Hall of Concord Hotel Owerri, venue of the social empowernment programmes where thousands of poor and vulnerable persons gathered for the event, the Governor saluted Hajia Farouq and her team for being passionate about the programmes, an initiative of President Muhammadu Buhari.

Governor Uzodimma informed that it is the level of successes recorded by Hajia Farouq in her Ministry at the national level that propelled him to establish a similar Ministry in Imo State.

The Govenror said: “Everything about government, every promise and every expectation starts and ends with the Ministry which is anchored on the people.”

He maintained that the Federal Government led by President Buhari and his own government in Imo State are anchored on service to the people,  especially the vulnerable groups among whom are the poorest of the poor and the physically-challenged.

He therefore pledged the support of his government to various programmes of the Ministry and to Imo people who are in dire need of such assistance, noting that it was in recognition of the value of the programmes that the 3-R government empowered 15,000 youths last year with N250,000 each.

Governor Uzodimma said the National Home Grown feeding programme is “one of the most noble programmes Nigerians have ever seen and experienced because it accommodates the interest of our children who are encouraged to go to school and their diet.”

He expressed the gratitude of his government and the people of Imo State to President Buhari for such laudable programmes that have gone a long way in alleviating the sufferings of the vulnerable group and the poorest of the poor in Nigeria.

To the beneficiaries, the Governor pleaded with them to make judicious use of the money given to them no matter how small they may think it is.

In her address, Hajiya Farouq said she was in Imo with her team to flag-off the programmes’ grant for vulnerable groups, a project which was introduced in 2020, first as grant for rural women to sustain the social inclusion agenda of President Buhari’s administration of lifting 10 million Nigerians out of poverty in 10 years.

She said for Imo State, the target is to disburse the grant to 3,894 beneficiaries across the 27 LGAs of the State, adding that President Buhari directed that 70 per cent of the beneficiaries must be women, while the remaining 30 per cent should be for the youths.

“The President also directed that at least 15 per cent of the total number of the beneficiary must be specifically allocated to citizens with special needs including persons with disability (PWDs) and senior citizens in the State.”

The Minister said it is expected that “the beneficiaries will use the grant to improve their productivity, create wealth, generate employment and improve their living standard.”

On other outstanding programmes for which she visited, Hijya Farouq said they  came to roll-out the government enterprise and the empowerment programme which captures traderMoni loan of N50,000; marketMoni designed for under privileged and marginalised women and farmerMoni loan scheme which is equally designed to produce agricultural inputs worth up to a maximum of N300,000 to rural farmers.

In addition to the above, the Minister said they also came to flag-off the National Sensitization Exercise for the National Home Grown School Feeding Programme (NHGSFP) which aims to educate communities and stakeholders on the proper and more effective implementation of the NHGSFP with over five million children as targets.

Other programmes which she said they came to flag-off include the on-boarding of stream 2 of the Independent Monitors who are local youths employed for a period of 12 months with a monthly stipend of N30,000 only and the flag-off of the digitalized cash transfer payment system for conditional cash transfer programme aimed at creating room for reliability, transparent and accessible database for seamless disbursement to beneficiaries of the scheme.

The Minister reminded her audience that with the complementary efforts of Governor Uzodimma’s administration  and other Stakeholders, the target beneficiaries and many more citizens of the State will be on their way out of poverty.

She in turn commended the Governor Uzodimma for establishing a replica of her Ministry in Imo State and also thanked him and other Stakeholders for joining in the programme and urged them to continue with the commitment to fight poverty in our great country Nigeria.

Earlier in their welcome addresses, the Commissioner for Humanitarian Affairs, Disaster Management and Social Development Imo State,  Dr. Princess Rabi Ibrahim represented by the Permanent Secretary,  Mrs. Edith Ekenze welcomed the Minister to Imo State for the flag-off and thanked her for the much Imo State has already received from the various programmes which include Conditional Cash Transfer, N-SIP, etc.

She however identified some challenges in the Ministry’s programme in Imo State in the areas of GEEP, Home Grown School Feeding, Conditional Cash Transfer and others to include inaccurate data, inconsistency in payment, ignorance of beneficiaries and non-payment of arrears to the beneficiaries and requested for the Minister’s kind intervention.

The Ministry also expressed gratitude to Mr. President for accommodating Imo State in the National programmes and to Governor Uzodimma for establishing the Ministry whose activities could be said to be nearest to the common man.

The wife of the Governor, Barr. Chioma Uzodimma, the Deputy Governor Prof Placid Njoku and his wife Bola, were among the numerous key persons that witnessed the ocassion.