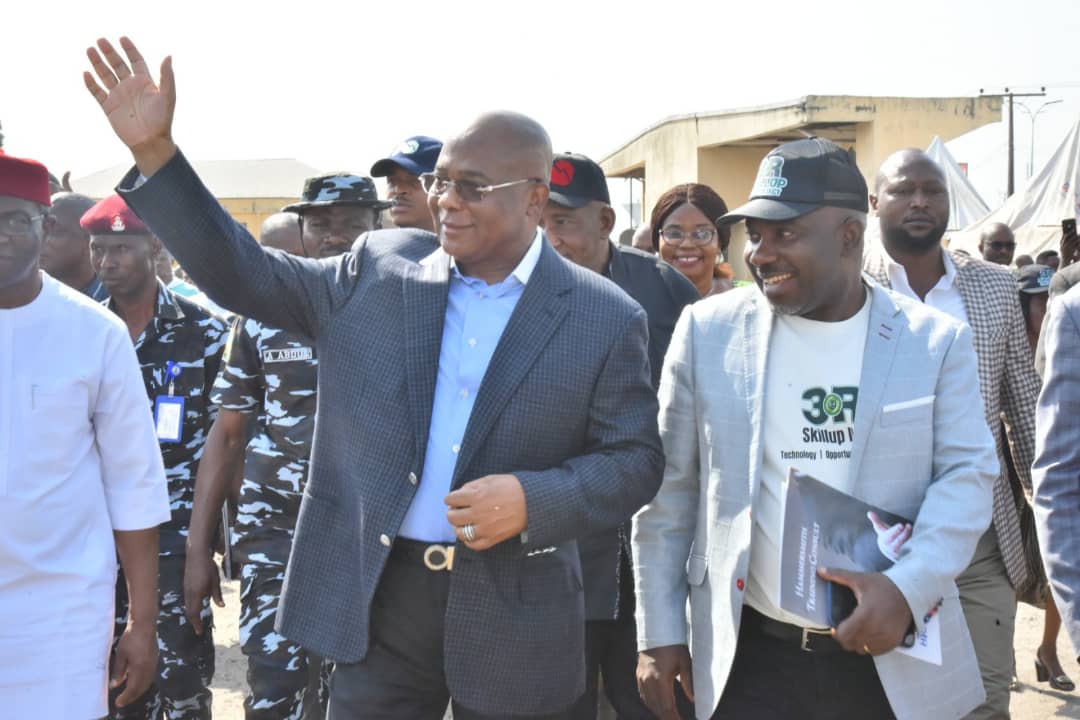 The Governor of Imo State, Senator Hope Uzodimma has flagged-off the ‘Skill-up Imo Project’ organized by the Ministry of Digital Economy and E-Government and targeted at  training more than 100,000 Imo youths in digital skills on entry and advance levels.

The ceremony which took place on Friday at the Ministry of Digital Economy and E-Government office (former ICAPs) on Egbu Road, Owerri was used to enlighten the youths on the need to imbibe digital skills as the future economy goes digital.

Addressing the mammoth audience which comprised mainly Imo youths, the Governor said the future of Imo State depends on the youths who registered for the training.

He highlighted that the “world economy is changing very fast and 95 percent of the world economy is now digital and the only market available today for any business to thrive is digital market.”

There is ‘’no government infrastructure that is as important as development of the youths.”

He reiterated that the major ideas that rule the world today are digital economy, climate change, or carbon-credit, hence the “need to re-align ourselves so that we can get to the global destination.”,

Governor Uzodimma told the youths to understand that the digital programme they are getting into is a road to the digital world and a form of finishing school notwithstanding once profession.

He then advised them to choose among the several programmes and master them as an opportunity to key into the digital world economy.

Governor Uzodimma promised the participants that once they graduate they will have equipment from the State Government to start live.

“This is because our government is already working with international companies such as Apple, Zinox Computers and others to partner the State Government in getting the graduate youths engaged on the acquired skills.”

He assured them that there are ready made jobs out there that will promptly engage some of them who learnt technical skills such as: repair of telephones, IPADs and others on graduation.

The Governor further noted that “the primary objective include; reduction in crime, criminality and idleness and making the youths to be more focused.”

He emphasized and also warned that the Skill-up programme is not about politics.

In his address of welcome, the Commissioner for Digital Economy and E- Government, Dr. Chimezie Amadi explained that ‘Skill-up Imo Project’ is a programne conceived by Governor Uzodimma which is specially designed to provide free training and support to 100,000 Imolites, particularly the youths, in new, innovative, and economically viable skills needed for them to be productively employed or self- employed.

He noted that the first set of 5,000 learners will be engaged for training for 12 weeks in various areas of application which include –  Web Development, Business Innovation, Mobile App Development, Cyber Security and Forensics, Networking and Hardware, and Engineering.  Others include; Robotics and Mechatronics, 3D Technology, Drone Technology, Social Media and Digital Marketing and Animation and Multimedia among others.

He therefore thanked the Governor for thinking it wise to establish the Ministry as the first of its kind in any State of the federation with the objective of reducing crime and criminality, improving economy and connecting Imo State to the outside world.

The Governor was accompanied to the event by the Deputy Governor, Prof. Placid Njoku, the Speaker,  Barr. Emeka Nduka, members of the State House of Assembly, the Secretary to the State Government, Chief Cosmas Iwu, the Chief of Staff, Barr. Nnamdi Anyaehie and members of the State expanded Executive Council.