Uzodimma doles out 31 SUVs to leaders of Imo monarchs 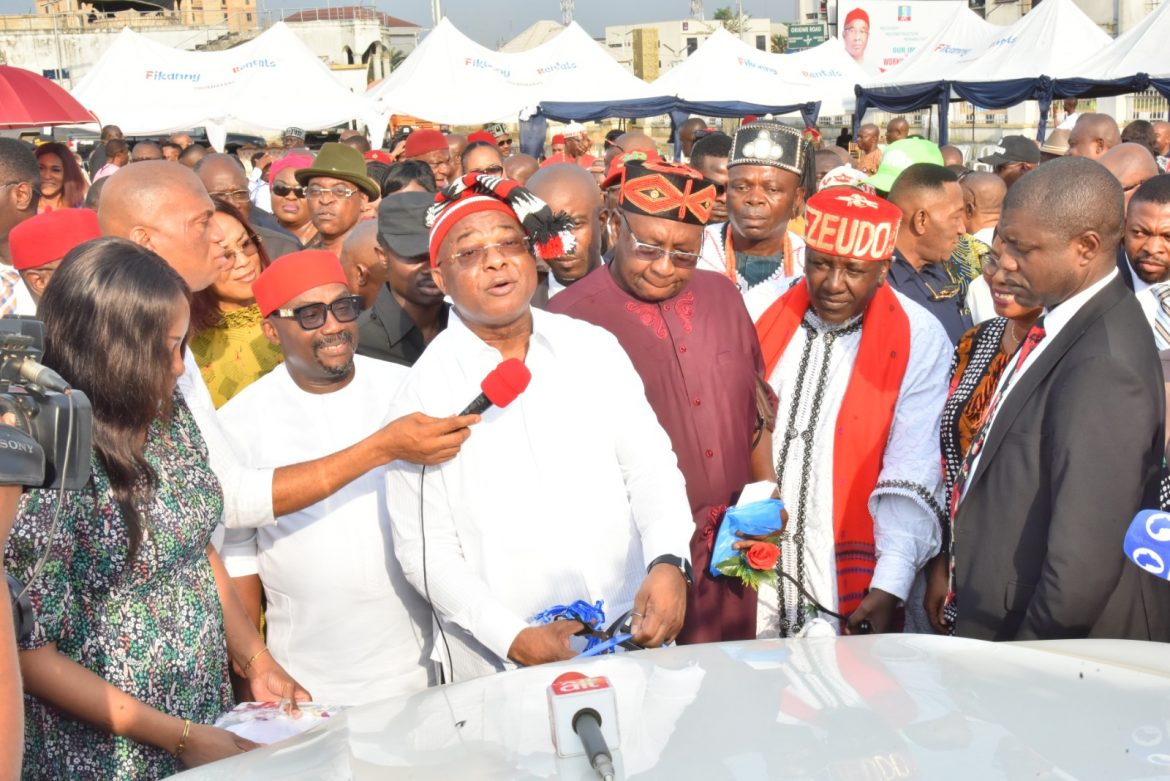 The Governor of Imo State, Sen. Hope Uzodimma has presented 31 SUV vehicles to the leaders of traditional rulers in Imo State to enhance their operational mode.

Those who benefitted from the largesse include the Chairman of Imo State Council of Traditional Rulers Council,  his three Zonal Chairmen and monarchs who are Chairmen in the 27 Local Government Areas of the State.

The vehicles are to assist the Chairman of Imo State Council of Traditional Rulers and his team across the State in their day-to-day operations.

Making the presentation, the Governor said the Traditional Institution is a critical and important institution that represents the culture of the people and tradition and could be described as the “Citadel of Justice at the Community level.”

He noted that the monarchs maintain security and dispense justice at the rural level and that some of them in doing so even lose their lives. He said the car gift was meant to encourage them not to relent in their service to the State.

Governor Uzodimma said that “from time to time a strong welfare package will be made available to the Royal Fathers of the State as a way of cushioning the effect of their non-participation in some activities that would have made them more comfortable.”

He assured the monarchs that soon,  “as the Constitutional Amendment is concluded the Royal Fathers in the country, Imo State inclusive, will be assigned constitutional responsibilities.”

He appealed to them to do well to speak to the youths to leave crime and criminality and come forward for empowerment programmes designed by the State Government to make them entrepreneurs and employers of labour.

He proceeded to announce that the 3R government is about to empower over 5,000 Imo youths with Laptop (Computers), acquired by the State Government and donations from the Zinox Computers.

He seized the opportunity of the programme to plead with those involved in banditry, murdering of innocent citizens and other activities that tend to make the State unsafe to think twice and turn a new leaf.

Governor Uzodimma reiterated his earlier plea with Eze Imo and other Traditional Rulers to partner Government to curb crime and criminality, emphasizing that “in this Christmas festivities, Government will stop at nothing in ensuring that Imo people both at home and in Diaspora returning for Christmas will go about their businesses without fear of harassment and molestation.”

According to him, “the security architecture will be stepped up.”

He called on all and sundry to continue to pray for the President Muhammadu Buhari for his goodwill for Imo and in helping the State to share in both tangible and intangible dividends of democracy as exemplified in upgrading Federal Medical Centre to University Teaching Hospital and making Alvan Ikoku College of Education a Federal University College of Education in addition to the approval given for the dredging of Oguta/Orashi River to the sea that will open up Imo State to the outside world through the waterways.

Governor Uzodimma recalled how he did his best to turn around the near decayed Imo State when he assumed office in 2020 through improving the Civil Service, working on the mindsets of the people and bringing back trust of the people to governance.

“On the aggregate we can say we have hope,” he noted, even as he said that “it is not uhuru yet in areas of security because the enemies are still on the prowl.”

But he warned that they should not allow themselves to be used to destroy our Imo, stating that his government is not relenting because “it is the primary duty of every government all over the world to guarantee the people security of lives and properties.”

In her remarks the Imo State Commissioner for Local Government and Chieftaincy Affairs, Mrs. Rubby Emele told the audience that the Governor is going about doing good, not only in infrastructure but in human capital development.

“Today is the Traditional Rulers turn and the next day it will be the empowerment of youths.”

She described the presentation of the vehicles as a distribution of amenities to the Communities and Local Government Areas and “one of such numerous exploits of the Governor.”

Why Bill On Surrogacy, Human Fertilisation Is Important In Lagos – Obasa