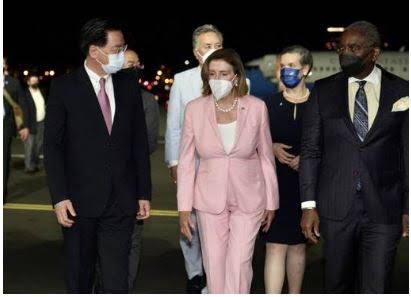 The 82-year-old lawmaker waved to waiting dignitaries at Taipei’s Songshan airport before boarding a US military aircraft that took off at 6 pm (10:00 GMT), live broadcasts showed.

As it hosted Pelosi, Taiwan struck a defiant tone, with a furious China gearing up for military exercises dangerously close to the island’s shores in retaliation for the visit.

Pelosi landed in Taiwan on Tuesday despite a series of increasingly stark threats from Beijing, which views the island as its territory and had said it would consider the visit a major provocation.

China responded swiftly, announcing what it said were “necessary and just” military drills in the seas just off Taiwan’s coast – some of the world’s busiest waterways.

“In the current struggle surrounding Pelosi’s Taiwan visit, the United States are the provocateurs. China is the victim,” Beijing’s foreign ministry said.

“Facing deliberately heightened military threats, Taiwan will not back down. We will… continue to hold the line of defence for democracy,” Tsai said at an event with Pelosi in Taipei.

She also thanked the 82-year-old US lawmaker for “taking concrete actions to show your staunch support for Taiwan at this critical moment.”

China tries to keep Taiwan isolated on the world stage and opposes countries having official exchanges with Taipei.

Pelosi, second in line to the presidency, is the highest-profile elected US official to visit Taiwan in 25 years.

But Taiwanese President Tsai Ing-wen said the island of 23 million would not be cowed.