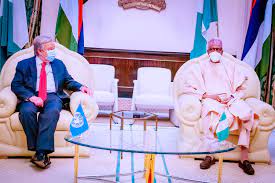 Secretary – General United Nations (UN) Antonio Guterres said Wednesday that the agency was mobilising $321 million to support Nigeria’s fight against insurgency in the North-eastern part of the country and address the humanitarian crisis.

He said this while briefing State House correspondents after he met with President Muhammadu Buhari.

“We are very active in support of the humanitarian effort of the Nigerian government and that is why we have called for an additional $351 million as part of the overall $1.1 billion for the humanitarian response plan for Nigeria,” he said.

The UN scribe, who was on a working visit to Maiduguri, Borno state, said: “Despite all that they have seen and endured, the people I saw remain hopeful and committed to returning to their communities and resuming their lives.

“To that end, I welcome the establishment of the Presidential Committee on the Repatriation, Return and Resettlement of displaced persons in the North-East.”

Speaking on his meeting with President Buhari, Guterres said they had discussions on how to address the challenges confronting Nigeria and the smooth conduct of the 2023 general elections in Nigeria.

“The spirit of hope amidst hardship and solidarity in the struggle was also in the center of my discussions with the Nigerian President today. We discussed the importance of laying the groundwork to ensure peaceful and democratic elections next year and the full participation of Nigerian women and young people in all areas.

“We also discussed the government’s measures to address security challenges across the country. I want to extend my deepest condolences to the victims of the appalling attacks in Plateau State two and half weeks ago. It is a tragic reminder of terrorism scourge across West Africa and the Sahel,” he said.

He emphasised the commitment of the UN to combat terrorism, violent extremism, organised crime, poverty, and food insecurity.

“I thank President Buhari for his unwavering support for the Multinational Joint Task Force and the Lake Chad Basin Commission. We also discuss the other challenges that Nigeria is facing today. Nigeria is a pillar of continental and global cooperation and a steadfast part of the United Nations.

“From its vital support for peacekeeping to its leadership in fighting for fairness in developing countries to being home of my Deputy Secretary, Amina Mohammed, above all Nigeria is a country where Africa’s promise and potential can come to vivid life,” he said.

Asked if the pressure from Ukraine for humanitarian assistance affects UN supply to other nations in need like the Niger Republic, he said: “From the point of view of the United Nations, it does not affect. We have increased our actions in Ukraine, but we have not decreased our actions in all other parts of the world.

The UN Scribe, who had been in Borno state Tuesday, said what he saw was a departure from the pictures of hopelessness and despair painted, adding that “people exuded hope.”

“Yesterday, I visited Maiduguri where the United Nations is supporting the internally displaced. I was deeply moved by their stories and struggles.

“These include the struggles with hunger, with the World Food Programme projecting 4.1 million people in the North East of Nigeria to be food insecure in the upcoming lean season,” he said.

“But despite all they have seen and endured, the people I met remained hopeful and committed to returning to their communities and resuming their lives. To that end, I welcome the establishment of the Presidential Committee on the Repatriation, Returns and Resettlement of Displaced Persons in the North East,” the UN scribe said.

He said the war in Ukraine will make things worse for global food, energy and financial systems, adding: “That’s why, in the earliest days of this war, I established the Global Crisis Response Group on Food, Energy and Finance, involving all UN Agencies and international financial institutions. The Steering Committee is chaired by Deputy Secretary-General, Amina Mohammed.”