…where the playing field is levelled
© 2022 | FREEDOM POST- All Right Reserved
Home » Sri Lankan President to resign Wednesday as protesters break into palace, use swimming pool, bed, others
Foreign affairs

Sri Lankan President to resign Wednesday as protesters break into palace, use swimming pool, bed, others 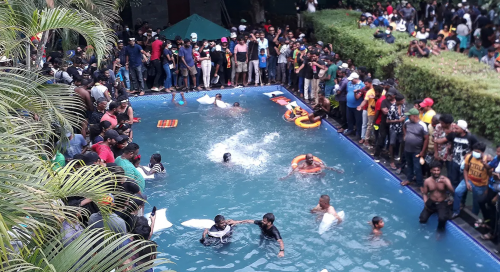 Share 0FacebookTwitterWhatsappEmail
Kindly share this story:
The Speaker of the Sri Lankan Parliament, Mahinda Yapa Abeywardena has said the President, Gotabaya Rajapaksa will resign effective on Wednesday, July 13, 2022.
Earlier on Saturday, Rajapaksa was forced to flee his residence in Colombo as thousands of protesters laid siege to the compound, RT reported.
However, the parliamentary speaker announced this in a televised statement on Saturday night.
According to him, “to ensure a peaceful transition, the president said he will step down on July 13.”
The announcement came hours after Prime Minister Ranil Wickremesinghe declared that he would also be willing to step down, paving the way for an interim government followed by-elections.
Sri Lanka, a nation of over 22 million has been rocked by protests for several months, with the unrest driven by soaring inflation and shortages of food, fuel, and medicine. The country defaulted on its foreign debt in May, and fuel rationing was introduced earlier this month, with armed troops deployed to filling stations.
The economic crisis has been blamed partly on the Covid-19 pandemic and the resulting fall in tourism revenue for the island nation. However, Rajapaksa’s government has been fiercely condemned for its policies of lavish spending and careless tax cuts, while printing money to pay off foreign bonds.
Government changes didn’t also allay the public anger and protests continued through May and June after the president’s brother, Mahinda Rajapaksa, stepped down as Prime Minister, handing the job to Wickremesinghe.
Earlier on Saturday, a crowd of protesters believed to number around 100,000 swooped on the presidential palace forcing the president to leave. He was, however, “escorted to safety,” according to government officials.
With his whereabouts unknown, the demonstrators forced their way into the building, where they raided its kitchen and swam in his private pool.
Video broadcast on Sri Lankan television and social media showed the protesters entering the President’s House — Rajapaksa’s office and residence in the commercial capital — after breaking through security cordons placed by police. Images show demonstrators inside the building and hanging banners from the balcony, as well as swimming in the residence’s pool. Some used the shower and took pictures on the President’s bed.
Protesters then also breached Wickremesinghe’s official residence in Colombo, known as Temple Trees, according to local media reports, while video of protesters entering the gates to Wickremesinghe’s residence circulated on social media on Saturday.
Demonstrators also broke into Wickremesinghe’s private residence, on Fifth Lane, and set it on fire, according to his office. Live video streamed by local media and seen by CNN showed the residence engulfed in flames as crowds gathered at the scene.
Wickremesinghe was not there at the time it was breached. He had been moved earlier to a secure location, his office said.
If both Wickremesinghe and Rajapaksa resign, under the Sri Lankan constitution, the speaker of parliament will serve as acting president for a maximum of 30 days.
Meanwhile, parliament will elect a new President within 30 days from one of its members who will hold the office for the remaining two years of the current term.
According to the Sri Lankan news outlet Newsfirst, after Rajapaksa leaves office on Wednesday, Parliament will likely choose a caretaker president, and Speaker Abeywardena will likely take over as prime minister.
Kindly share this story:
Share 0 FacebookTwitterWhatsappEmail
previous post

This Naija guy makes at least $2,000 per month from Twitter by writing tweets for just one hour daily.
And now he wants to show you…:https://www.youtube.com/watch?v=n8GmdqPOW1A

⬇️ Link ⬇️
Copy and paste this link into your browser to get access to the product.