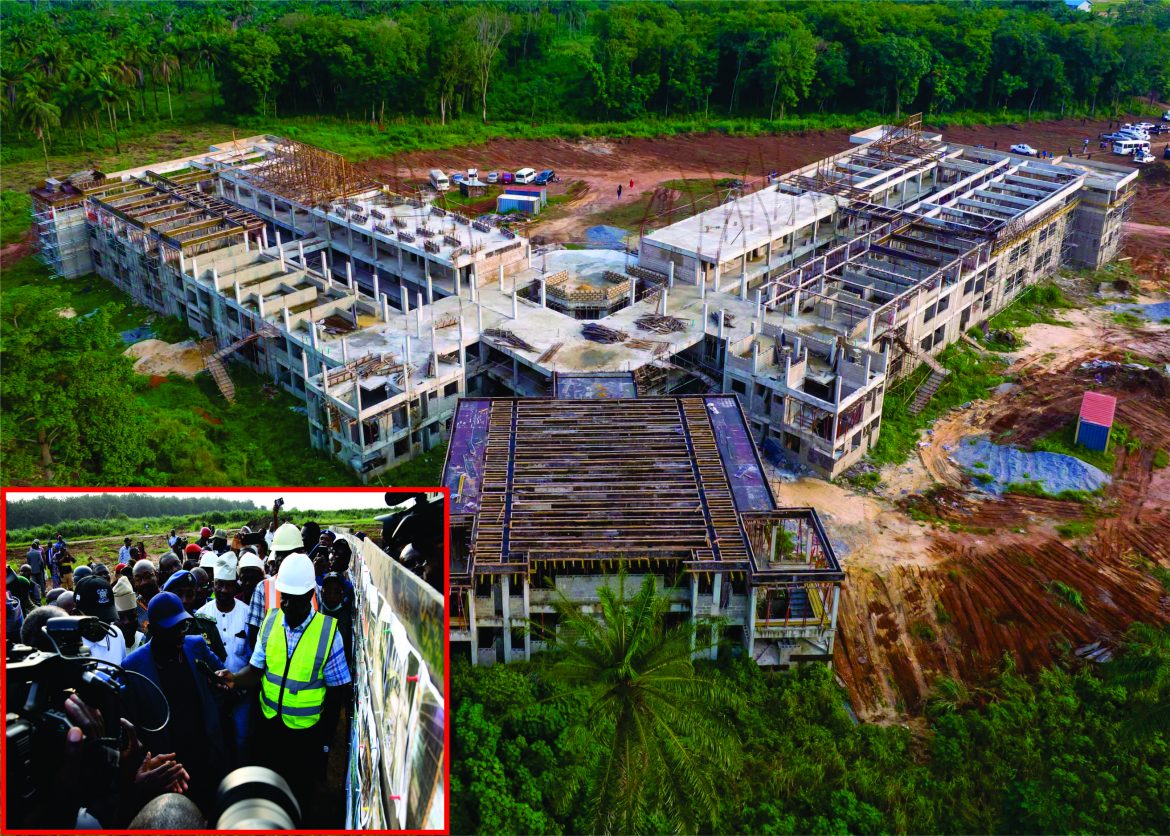 Governor Babajide Sanwo-Olu’s visit to the Ikorodu campus of the Lagos State University of Science and Technology (LASUSTECH) on Wednesday took members of the academic community by surprise, but the campus was agog with excitement, as students trooped out to give the Governor a rousing welcome.

Sanwo-Olu was on the campus for an inspection of the ongoing construction of the Central Administrative Office and ancillary buildings, which are parts of the requirements for the smooth transition and operation of the university.

Both schools met the requirements set by the National Universities Commission (NUC) to assume full status of degree-awarding institutions.

Students led by their leaders formed rings round Sanwo-Olu’s convoy, chanting various ‘Aluta’ slogans to receive the Governor and his entourage, including the Special Adviser on Education, Hon. Tokunbo Wahab.

Sanwo-Olu proceeded to the construction site to inspect the level of work on the university Senate Chamber and administrative office buildings, confirming the projects were at about 70 per cent completion.

The Governor disclosed that the State Government had signed the contract for the construction of a 5,800-capacity hall of residence through a Public Private Partnership (PPP) model. The move, Sanwo-Olu said, is to make the new university an on-campus institution.

He said: “We are happy that Lagos State University of Science and Technology has taken on a life of its own. The project has left the drawing board to gradually become reality we can all behold. When these buildings are completed, we will be starting another construction of a 750-capacity Lecture Theatre.

“We will also be replicating the same model we have in Lagos State University (LASU) to ensure the new university becomes an on-campus accommodation school. We have already awarded a contract for development of 5,800-capacity accommodation for students through the Public Private Partnership (PPP) model.”

Students presented a branded portrait to Sanwo-Olu in a show of appreciation for the upgrade of the polytechnic to a degree-awarding institution, while also presenting fresh requests for which they sought Governor’s assistance.

Students’ Union Government (SUG) president, Aderemi Balogun, appealed to Sanwo-Olu for a bus scheme that would ensure seamless transport of students from Isolo campus of the school to Ikorodu campus and back. The union leader also pleaded with the Governor to clear the air on proposed fees for the new university.

Responding, the Governor donated two high-capacity buses to the SUG to aid students’ mobility to and from the two campuses. The announcement was greeted with spontaneous jubilation, as the students chorused: “You are a leader…may God preserve our Governor and strengthen him to do more.”

Sanwo-Olu cleared the air on the rumoured fee – said to be around N200,000 – to be paid by students as a result of the school’s upgrade. The Governor emphasised there had been no memo either from the school management or the State Government announcing any fee, calming the students and assuring them that his Government would not burden them unnecessarily.

The Governor also promised extensive renovation of the Students’ Union building as requested by the students, while promising to work with the Office of the Senior Special Assistant to President Muhammadu Buhari on Sustainable Development Goals (SDGs) to upgrade the school’s sporting complex to a full-fledged stadium.

Sanwo-Olu said: “On the school fee, there is no truth in the rumour making the rounds. The information is speculative. The university management has not mentioned to me that this is the amount of fee they want to charge students coming for degree programmes. The information is not true. Let it happen first and allow me to take charge. No fee has been announced.

“On your request for a befitting SUG building. You need to be patient with me. We will first renovate the current students’ arcade but we will take time to develop a purpose-built edifice for your SUG activities. You also want a stadium; I will work with the Office of SDGs to the President and see how we can build a sporting complex in this university.”

Before leaving the campus, the Governor gave the students an unsolicited gift: provision of free campus-wide high-speed Internet for their research work and other academic usage.