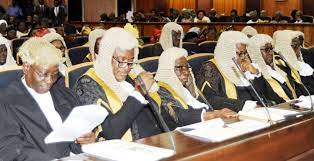 A Senior Advocate of Nigeria (SAN), Chief Sebastiane Hon, has dragged the Attorney-General of the Federation (AGF), National Judicial Council (NJC) and the National Assembly (NASS) before a Federal High Court in Abuja over poor wages paid to judges

Chief Sebastiane is praying the court to compel them, alongside the Revenue Mobilisation Allocation and Fiscal Commission (RMAFC), to increase the salaries and allowances of judges in the country.

The suit was filed by the senior lawyer is marked: FHC/ABJ/CS/595/2022 in his capacity as a concerned legal practitioner in Nigeria.

The court action has the National Assembly, the RMAFC, the AGF and NJC as defendants.

In a supporting affidavit to the originating summons, Hon stated that as a legal practitioner, “who has practised in all the levels of courts in Nigeria, I know  that poor pay for judicial officers is seriously affecting the quality of judgments and rulings those officers are delivering and the discharge of other functions associated with their offices.”

He argued that the current economic reality in the country requires that the salaries and allowances of the nation’s judges be urgently improved upon.

The plaintiff noted that the highest-paid judicial officer in the country – the Chief Justice of Nigeria (CJN) – currently earns about N3.4 million per annum, far below what is earned by such an officer in other countries.

Hon, who quoted what all judicial officers currently earn as provided under Part IIB of the Schedule to the Certain Political, Public and Judicial Office Holders (Salaries and Allowances, etc) Amendment Act 2008, said the paltry sums have discouraged him from aspiring to become a judge.

He noted that it is about 14 years now since the salaries and allowances of judges were last reviewed upward in 2008 despite the loss of value of the naira vis-à-vis other global currencies like the US dollars, the British pound sterling and the European Union (EU) euro, etc.

“As of November 2008 when the amended Act was in force, the exchange rate between the naira and the US dollar was N117.74 to USD1.

“The naira has considerably lost its value over time; but judicial officers in Nigeria have been placed on the same salary scale for up to 12 years, namely since 2008,” he said.

Sebastiane Hon added that “even foreigners who have been hired from time to time to coach Nigeria’s national football teams earn higher than Nigeria’s judicial officers.”

He is praying the court for among others, a declaration that by a combined reading of the provisions of section 6(1)(b) and (d) and Parts A and B of the First Schedule to the Revenue Allocation Mobilisation and Fiscal Commission Act, Cap. R7, Laws of the Federation of Nigeria, 2004, it is unconstitutional for the 2nd defendant (RMAFC) to refuse or neglect to upwardly review the salaries and allowances of the judicial officers notwithstanding the changing local and international socio-economic realities.

The plaintiff wants an order compelling the defendants to forthwith activate measures to urgently review judicial officers’ pay, raising that of the CJN to a minimum of N12m monthly, N11m for other Justices of the Supreme Court and Court of Appeal President; N10m for other Justice of the Appeal Court, the Chief Judge of the Federal High Court and President of the National Industrial Court (NIC).

Hon also wants the court to compel the defendants to raise the monthly minimum take-home of a judge of the NIC to N9m; N8m for Chief Judges of High Court of state sand the Federal Capital Territory, while the other judges are entitled to N7m.

He also seeks an order compelling the RMAFC or any other body assigned its responsibilities, “to, in perpetuity, review and continue to embark upon and carry out, in conjunction with the 3rd defendant (AGF), a yearly or at most a two-yearly review of the salaries and allowances of the judicial officers listed above, with a view to making the said salaries and emolument realistic and befitting of the offices and duties attached to/exercised by such offices.”

Meanwhile, no date has been fixed for the hearing of the suit.