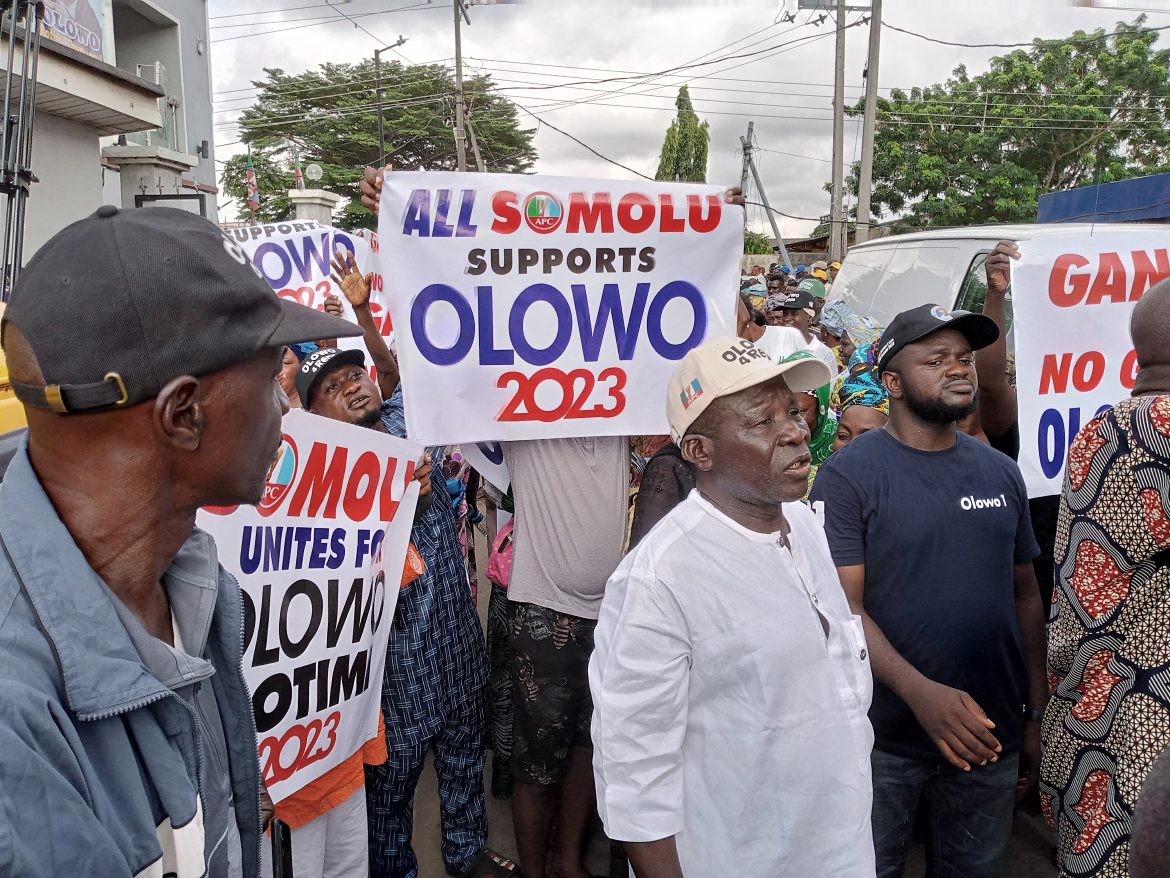 Residents of Somolu/ Bariga area of Lagos on Sunday protested against what they described as imposition of candidate to represent Shomolu Federal House of Representatives against popular demand.

The protesters who walked down major steets in Somolu with postcards insisted no primary election took place for both the state assembly and the federal house of representatives and any attempt to send names of candidate would amount to imposition which they promised to resist.

Inscription on some of the placards they carried reads; “Somolu says Olowo again 2023”, “Somolu Unites for Olowo Rotimi”, “Gang up or no gang up, Olowo ni o”, “Somolu stands with Olowo 2023”, etc.

One of the delegates by name Malik Olawale who spoke with journalists during the “walk for Olowo” said, “we were at the local government secretariat to vote as delegates on the supposed day of primary election, election didn’t not take place, the electoral officer said there was a mixed up in the electoral materials, therefore, on that note, the election wonuld not be holding, he then promised to send same report to the concerned authority.

“So, it was obvious they didn’t want the primary to hold, they know if we go to the field, our candidate Hon.Rotimi Olowo will beat them, that is why they are afraid of primary”, he said.

Another constituents, Adebayo Aganga Williams said all they were clamouring for in the interest of peace and harmony in Somolu is that people’s will should be allowed to prevail.

“Our candidate is Hon Olowo, he is our representative. We want the leadership of the party to respect the wish of the people of Somolu”, said Aganga Williams.

Mrs Oluremi Doherty from ward D also said, “we are here to tell the party leadership that Rotimi Olowo is our choice.

“As a widow, I am a beneficiary of his benevolent heart, he has done so much for both young and hold, male and female in Shomolu. we can’t say same of the incumbent house of reps member, that is why we are saying Olowo should go and represent us at the federal house of representatives, he has done it for us at the state assembly level, we know he can do it better

“We are therefore, appealing to the leadership of our party not to subvert the will of Somolu people if they want our party to win this election. Rotimi Olowo is our choice, and we won’t settle for less”, she affirmed.