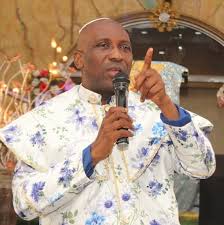 The Holy Bible has given us the prerequisite to know a true prophet and it is simply by saying a thing that eventually comes to pass no matter how long because it is the word of God. Whenever an individual consistently dishes out words that always end up coming to pass, it’s obvious God speaks through such individuals and deserves to be listened to at all times.

Such an individual isn’t just ordinary, God has explained in his word that HIS secrets are kept with his Prophets and these prophets are the ones that can see beyond what every other person sees. They can foretell what will happen in the future according to what God has shown them.

In our world today, it’s rare to find such individuals who are blessed with the gift of prophecy and that is not to say we don’t have prophets in the world but they are very few.

One of the very few individuals who are blessed with the gift of prophecy and are still thriving in it due to their relationship with God is popular Nigerian prophet, Primate Elijah Ayodele of INRI Evangelical Spiritual Church.

Primate Ayodele’s prophetic ministry is quite unique from others that we have seen around because he talks on every sector of the society that includes sports, education, security, corporate organizations, individuals, governance, to mention a few.

Though a Nigerian, Primate Ayodele has proven records to confidently call him a prophet to nations considering his many fulfilled prophecies not about Nigeria alone but the world. Some of the events that have happened in this year were all the man of God warned about in his 2022 prophecies which were released on Wednesday, 22nd Of December, 2021.

One of the happenings that took most people by surprise was the invasion of Ukraine by Russia in February. Primate Ayodele had warned that he foresees that there will be an escalation in the crisis between the two countries. Few days before Russia invaded, Primate Ayodele spoke again and noted that he foresees massive destruction in Ukraine and of course, this was fulfilled with the invasion of Ukraine by Russia. Up till now, the destruction in the country isn’t countable.

Sadly, the world is about to experience another war-like situation following an escalation of the crisis between China and Taiwan. China unleashed a show of force against Taiwan on Thursday, firing missiles into the sea and threatening the island’s territorial waters in retaliation for Taipei’s hosting of U.S. House Speaker Nancy Pelosi for a contentious visit.

Meanwhile, on 25th Of April, 2022, Primate Ayodele warned world leaders to be on alert as he foresees war between China and Taiwan. In this prophetic warning and revelation, the man of God noted that world leaders need to watch China and act fast in order to avert the war situation.

‘’There will be a problem between Taiwan and China if the world leaders don’t work on it fast. China will want to start another trouble just like Russia. The world leaders need to watch China in order to avert this because the issue of Taiwan, China and America may also lead to what is happening in Ukraine.’’(https://dailypost.ng/2022/04/25/china-to-start-war-with-taiwan-be-alert-primate-ayodele-warns-world-leaders/)

China has started unleashing a show of force against Taiwan and this is majorly because the US Speaker, Nancy Pelosi visited the country despite receiving warnings against making such a trip. We would recall that the man of God stated that ‘’….the issue of Taiwan, China and America may also lead to what is happening in Ukraine’’ in his prophetic warning.