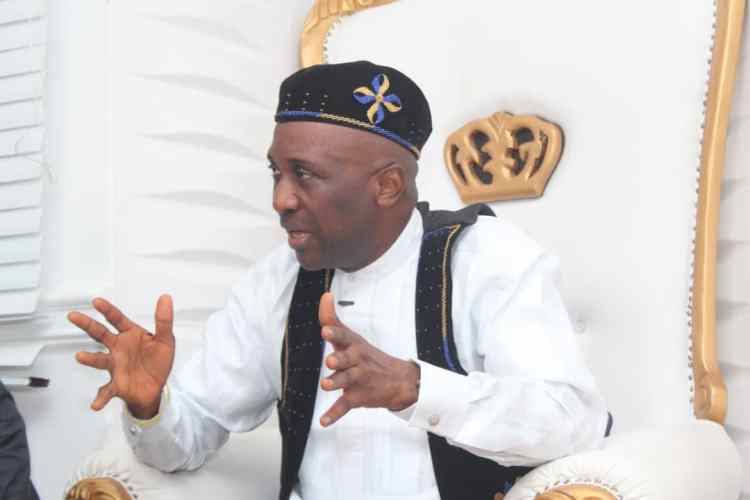 The Leader Of INRI Evangelical Spiritual Church, Primate Elijah Ayodele needs no introduction when it comes to prophetic matters as many of his prophecies have come to pass and they keep on getting additions as the day passes.

Even though he is a Nigerian, Primate Ayodele’s prophecy gift is recognized globally because he doesn’t talk of Nigeria and Africa alone, he goes as far as giving prophecies for every nation in the world.

It is not an easy feat having a record of more than 10,000 fulfilled prophecies as a prophet especially in this dispensation. When we see a man of God with this huge record, then it is obvious that God speaks to them.

In Africa presently, Primate Ayodele’s prophetic ministry stands tall especially with his annual prophecy book titled Warning To The Nations. He releases this prophetic book yearly and it normally contains prophetic statements to countries around the world, personalities, organisations, government establishments, to mention a few.

In the 2022/2023 edition which was compiled a few months ago, Primate Ayodele spoke about what some nations in the world will face in the next one year and surprisingly, they are already coming to pass.

Just a few days after the release of the book, the forceful exit of Sri Lanka president which was well noted in the book came to pass, fire outbreak at Bodija Market, Uber crisis, which were in the book got fulfilled. In the weeks that followed, several prophecies in the prophecy book came to pass.

In addition to the multitude of fulfilled prophecies, the flood crisis in Pakistan, tension in Iraq, leadership tussle in Libya, death of top NURTW official which were all in the prophecy book have given more reasons the man of God should be respected.

Over 33 million people and 72 districts have been affected by the ongoing floods in Pakistan. On Page 97 of WTN 2022/2023 edition, Primate Ayodele categorically warned that the country needs to work against flooding in the coming days. With the rate at which many have been affected, it’s obvious the man of God saw correctly when he made the prophecy.

Also, An influential Shiite cleric announced he would resign from Iraqi politics, prompting hundreds of his angry followers to storm the government palace and sparking clashes with security forces in which at least five protesters were killed. While prophesying about Iraq,(Pg140) Primate Ayodele revealed that he foresaw a political crisis, this has been fulfilled.

Furthermore, Clashes in Libya’s capital killed more than two dozen people over the weekend, the deadliest fighting the war-torn country has experienced in more than two years as rival political factions vie for control of the oil-rich nation. In his prophecy book (pg 135), Primate Ayodele wrote that he foresaw a political crisis and leadership tussle happening in the country. True to his words, the clash is as a result of tussle between two rival governments in the country involving the embattled prime minister, Abdul Hamid Dbeibah and newly sworn in prime minister, Fathi Bashagha.

Primate Ayodele has no doubt proven his call as a true prophet who hears from God going by his fulfilled prophecies. Other fulfilled prophecies of the man of God include the gas explosion around RCCG Camp, death of a top NURTW member, and many others.