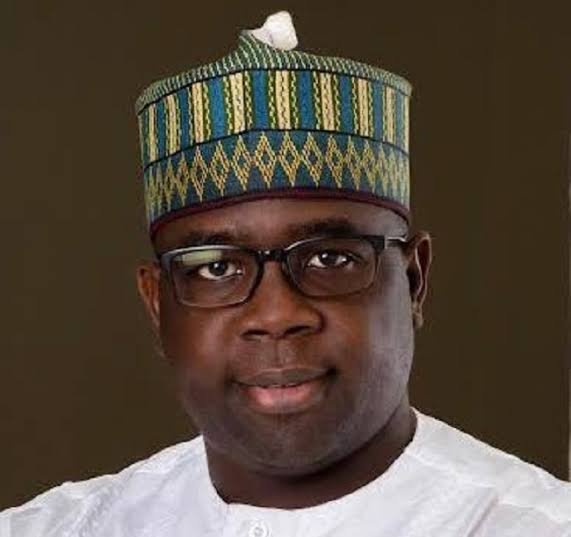 The gubernatorial candidate of the People’s Democratic Party (PDP) in Gombe, Muhammad Jibrin Barde has accused the State Government of victimisation and executive high-handedness, following a recent attack and the latest demolition of his campaign office in the state capital by the Gombe State Urban Planning Development Authority (GOSUPDA).

Barde, in a chat with the media displayed some bullet casings and tear gas canisters which were reportedly expended by the police task force team who escorted the GOSUPDA during the attack, narrated how he escaped the attack by whiskers and accused the state government of disruption of peace in the state. He decried the thuggish attack and latest demolition, which was the second time his campaign office would be hit by government forces, following a recent vandalisation of the same structure.

A petition written by Barde’s lawyers said the attack was spearheaded by the ruling APC State Government, and accused some government officials of leading some police personnel in the raid and demolition exercise. Among those identified as the ringleaders of the attack were Abubakar Kari, Chief of Staff to Governor; Executive Chairman of GOSUPDA, Grp. Captain Peter Bilal (Rtd); Sani PA, Personal Assistant to the Governor; and Garba Sale, PA to the Chief of Staff to the Governor.

In the petition, which was made available to newsmen, it stated that, “The Police Officers, the Governor’s appointees and other dangerous arms wielding thugs engaged in the indiscriminate firing of gunshots, with the approval of the state commissioner of police, which led to hospitalisation of 26 people from the neighbouring houses; the attempted assassination of Muhammad Jibrin Barde, the gubernatorial candidate of PDP in the forthcoming general elections, as well as the demolition of the campaign office, including 6 vehicles that were totally destroyed, with the potential for total breakdown of law and order in Gombe State.

“The Police Officers along with the officers of Gombe State Urban & Property Development Agency (GOSUPDA) invaded the Barde campaign office located by Liberty Junction, GRA in Gombe, under the guise of executing a purported court order, and during the attack, they demolished the office building, without any justification for their unprovoked actions. In the course of the attack, the Police Officers shot teargas and caused grave bodily harm to neighbours. Muhammad Jibrin Barde, the gubernatorial candidate of the PDP, escaped death by whiskers from a gun with live ammunition shot at him. The picture of the canisters are attached for ease of reference.”

According to the petition, “The Gombe State Commissioner of Police, Police Officers and the Governor’s Appointees who continue to terrorise and intimidate the residents and good people of Gombe do not only threaten their victims’ constitutionally guaranteed rights to life, with the attempted assassination of Muhammad Jibrin Barde the PDP gubernatorial candidate. These assailants continue to breach the rights to life; dignity of human person and freedom of movement of their victims as if there is no government in the State.

“Also, the roles of the Police Officers and the Governor’s Appointees as well as the presence of the vehicles from the said Government House at the scenes of the unwarranted attack, points in the direction of possible state sponsored assassination of perceived opponents in the State. This fear is strengthened by the deafening silence of the State Governor and the absence of Press Releases condemning the attacks”, it added.

The lawyers, in the petition, requested the immediate provision of additional security officers for the protection of Muhammad Jibrin Barde, the PDP Gubernatorial candidate attacked by Police Officers attached to the Governor of Gombe State as well as his Political Appointees; and the immediate suspension of the above listed Police Officers in order to carry full scale investigation into the unfortunate assassination attempt against above listed victims as well as the unlawful killings of nine people by them and the thugs they deployed.

They also sought the summary dismissal and prosecution of the above listed Police Officers that attempted to assassinate Barde, if found culpable at the end of the investigation; and the immediate removal, investigation, dismissal and prosecution of the Gombe state Commissioner of Police, the Police Officers and the Governor’s Appointees listed above.

Barde, in a statement, said the state development agency had flouted a subsisting order of court following an earlier injunction he brought before the High Court in Gombe, wherein he sought the protection of court against any action against the campaign office.

To buttress his accusation, he noted that a building approval was granted in December 30, 2021 to complete the building at the gate and erect a billboard. He said, “The GOSUPDA wrote a quit notice on the building in early March 2022. Consequent upon this, we obtained a court injunction on 18/3/2020 and duly served it on Government. They disregarded and violated the court order and demolished the building on 21/3/2022.

“We erected barriers to secure the demolished building and protect people from it. We sent several letters and correspondence to the state Commissioner of Police and the State Director of SSS. The GOSUPDA now are hiding behind an order of the court, setting aside the March 18 injunction (which they already violated and is in effect not in force), and came to demolish yesterday”, the PDP guber candidate added.

According to him, “I visited the Commissioner of Police who said that he had the court order. In any event, it (court order) was dated 28/7/2022 and setting aside an order which had already been violated and taken over by the demolition of 21/3/2022 (2 months ago) and the subsequent contempt proceedings. I asked the CP that, given my position as a candidate of the PDP and since he is in possession of our most recent petition, he ought to have drawn my attention and enquire from me if we have been served with the purported court order.”

However, the GOSUPDA, in response to Barde’s accusation said “the demolition of an illegal structure belonging to Gombe Good Leadership Association was carried out in the spirit of the ongoing reclamation of the development masterplan and maintaining the prevailing peace and tranquility the State enjoys.”

Some stakeholders have said the demolition exercise may not be unconnected with the running battle that Barde has been having with the Gombe state government. Recently, the PDP Guber candidate had gone on live television (ARISE TV news) where he levelled accusations of poor leadership and economic mis-governance against Governor Inuwa Yahaya, which he said has denied the indigenes of the state true gains of democracy and development.
Kindly share this story:
Share 0 FacebookTwitterWhatsappEmail
previous post