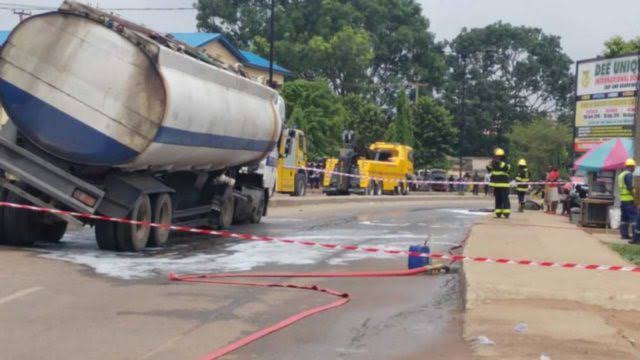 There was panic on Sunday in the Oregun, Ikeja area of Lagos State, after a tanker conveying 45,000 litres of diesel fell at the NNPC Bus-Stop.

Freedom Post gathered that the yet-to-be-identified tanker driver was turning into Etal Avenue, off Oregun Road, when the tanker fell on a high-tension electric pole.

He said, “On getting to the scene of the incident, it was discovered that a tanker with registration number unknown, conveying 45,000 litres of diesel fell on its side, discharging its content into the drainage.

“The immediate cause of the incident could not be ascertained. It was also gathered that the said tanker fell on the high tension electric pole and caught fire. This was put out by the agency’s LRT and the Lagos State Fire Service. No mortality or injury recorded at the scene of the incident. However, trans-loading operations are ongoing.”

The Public Education Officer of the Lagos State Fire and Rescue Services, Amodu Shakiri, told Freedom Post that the fallen tanker did not catch fire.

He said, “We did not allow it to erupt into a fire; it was just the tanker spilling its contents. Oregun is close to the Alausa Fire Station, so we quickly rushed there to manage the situation. The remains of the tanker’s contents were transferred into another truck.”