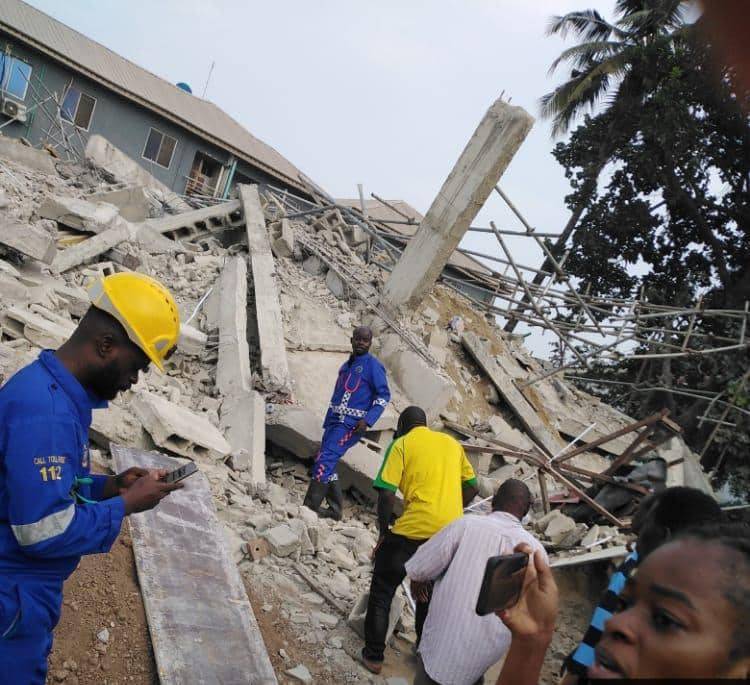 The recovered dead bodies which comprised of two adult males and two adult females, were dug up from beneath the rubbles of the collapsed portion of the 3-storey building after the Agency deployed it’s sophisticated echo and life detection equipment which pinpointed exact location of the trapped victims, while the light and heavy equipment were deployed in accordance with the path that was charted by the echo machine.

The collapsed portion of the old house was alleged to be a recent development constructed and attached to the original structure said to be over 40 years old, self-collapsed about 11:45a.m on Friday resulting to visible cracks on the original structure which was still standing and bearing several loads that included a telecommunications mast, transmission cabin, several watertanks and several other loads on it’s decked roof.

Honourable Commissioner for Physical Planning and Urban Development, Engineer Omotayo Bamgbose-Martins who visited the incídent site of the self-collapsed building, directed that the adjoining building be pulled down immediately to forestall further collapse and for safety reasons in view of it’s determined compromised status and the eminent danger the structure constituted to it’s immediate and extended environment.

The Lagos State Building Control Agency (LASBCA) and the Lagos State Materials Testing Laboratory, have been directed to unravel the immediate and remote cause (s) of the collapsed building at 2/4 Oye Sonuga Street, Palm Avenue, Mushin that served as residential, commercial complex with a bar and underground nite club,

Present at the still ongoing operation on Day-2 with even more equipment deployed, is the LRT, LASG Fire, LASTMA, LNSC, The Lagos State Building Control Agency (LASBCA), NPF and National Emergency Management Agency (NEMA), are all responders at the incident scene.