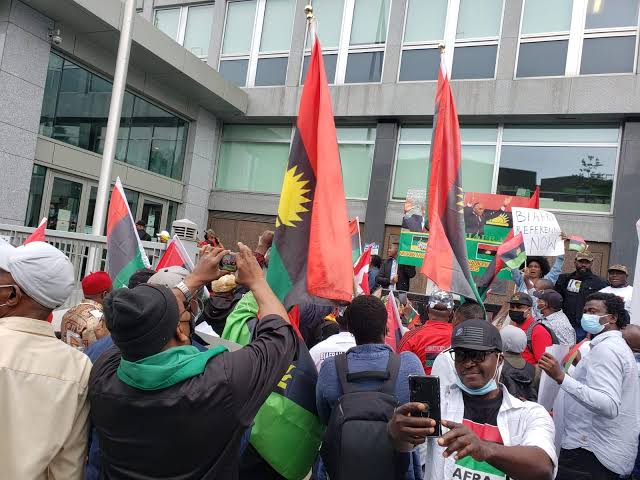 The Indigenous People of Biafra (IPOB) has raised the alarm that Nigerian security agencies are profiling and abducting Igbo people leaving or returning to Nigeria.

The separatist group alleged that such arrests have been going on at the international airports in Lagos and Abuja.

The group said that Igbo people are being profiled for supporting IPOB’s call for a referendum to determine agitation for Biafra which was occasioned by “neglect, discrimination and unfair treatment of Igbos in Nigeria”.

IPOB raised the alarm in a statement titled “Illegal profiling and abductions of Igbo passengers at airports are crimes against humanity,” issued on Wednesday evening through its Media and Publicity Secretary, Comrade Emma Powerful.

The group said any Igbo passenger who has anything about Biafra in their mobile phone is profiled, arrested and incarcerated by security personnel at the airports. The group described the alleged action as the worst victimisation and suppression of Igbo in Nigeria by the regime of President Muhammadu Buhari.

The statement reads: “We the global movement and family of the Indigenous People of Biafra (IPOB), under the command and leadership of Mazi Nnamdi Kanu wish to raise alarm over the profiling and abduction of some Igbo citizens who are travelling and coming back from Lagos and Abuja International Airports in Nigeria.

“The Nigerian Government and its compromised security agencies, especially the DSS (Department of State Services) and Immigration headed by Fulanis at the International Airports have embarked upon illegal profiling and abductions of some Biafrans purported to be family members of or supporters of IPOB movement.

“Nigeria Security Agents at the airport have taken it as a duty to humiliate Biafrans who are departing or arriving at these International Airports because of the agitation for the Biafra Referendum project.

It questioned the Nigerian state for allegedly discriminating and stereotyping an entire ethnic group because they want to break away from the “terrorists-infested country”.

It maintained that every “Biafran is an Indigenous Person of Biafra but not all Biafrans are IPOB family members”.

The statement further said, “IPOB agitation for the Independent State of Biafra is legal and supported by International and Nigeria laws. Arresting Biafran passengers whether they are for or against Biafra is not only wicked but unlawful too.

“Those illegally arrested at these Airports were not allowed to speak to their families and lawyers. They were also detained incommunicado in different security detention facilities across Lagos and Abuja. Many of the Biafran passengers that this Fulani government security adopted at the Airport were detained, extrajudicially murdered or starved to death.

“Therefore, if this indiscriminate harassment continues IPOB will have no other options but to ask the people being harassed to resist this unjust profiling and discriminatory policy and action of the Nigerian government security agencies at these Airports.”

It added, “It’s quite appalling that out of many passengers at the Airport only Biafrans, especially the Igbos are profiled and made to undergo indiscriminate and unlawful searching like common criminals because of Biafra agitation.

“But one thing is certain, these humiliations and intimidation cannot stop Igbos in conjunction with other Biafrans from pursuing the divine mandate to restore Biafra freedom. The earlier the Fulani-controlled government understand that their unjust arrest, torture and killing of Biafrans will not stop the coming of Biafra, the better for all of us.

“We are bringing this to the attention of the International Community especially the UK Government, the US Government, EU, AU, German Government and other Western countries in the world to prevail on Nigeria Government led by the impostor called Buhari and his Fulani security kinsmen to leave Biafrans alone. Biafrans have made up their minds to exit from the terrorist-infested country Nigeria.”

The group urged the international community to prevail on the Nigerian government to hold a “referendum for Biafrans to decide their fate in Nigeria”.

“Referendum is the only democratic process approved by UN for people to make their political decision,” it added.