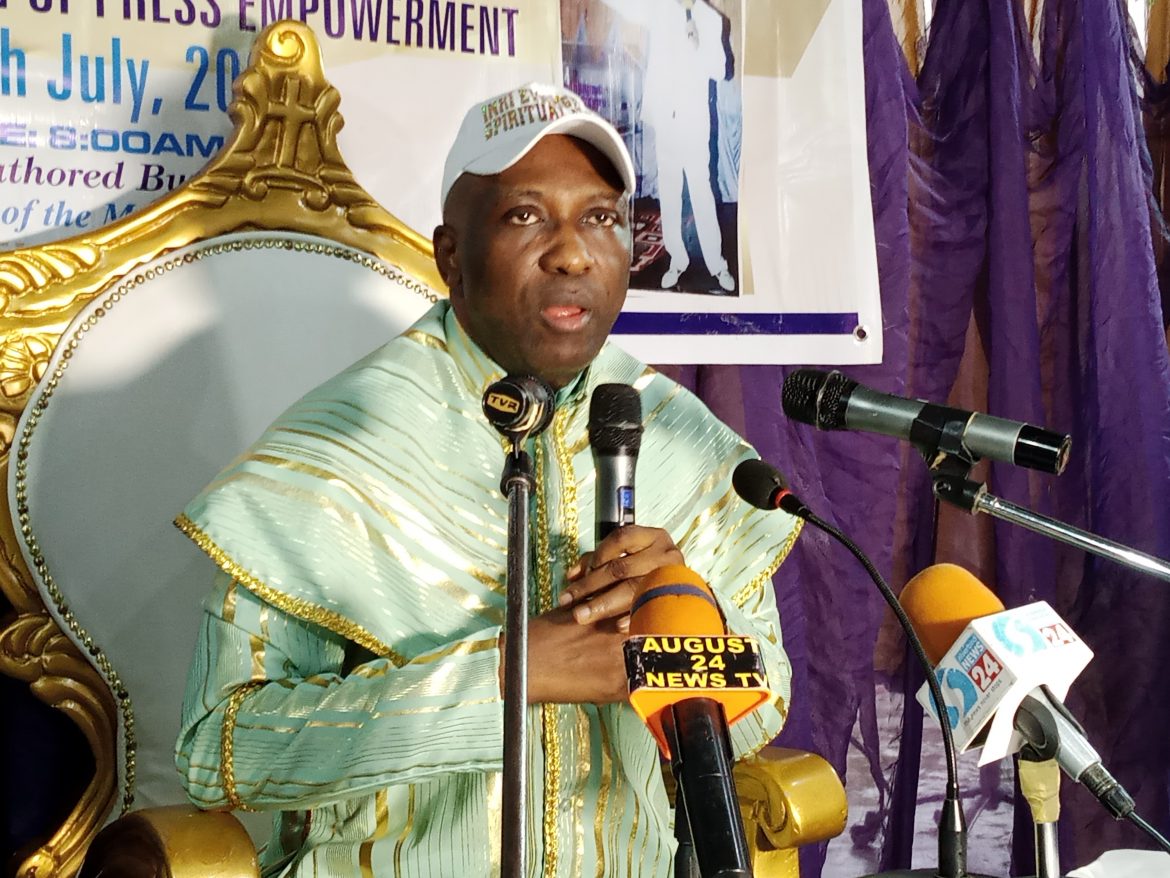 Share 0FacebookTwitterWhatsappEmail
Kindly share this story:
Leader of the INRI Evangelical Spiritual Church, Primate Elijah Ayodele says Nigeria will become worse off should the presidential candidate of the All Progressive Congress (APC), Bola Ahmed Tinubu become the next president of Nigeria.
The cleric said this on Saturday while addressing journalists in his church in Lagos during the release of his annual prophecies and presentation of a book, a compendium of his prophesies tilted, “Warnings to the Nations”.
According to the cleric, Nigeria will not get it right if Tunubu become the president  and the country will become worse than it is today under a Tinubu presidency.
“Bola Ahmed Tinubu and the APC can only win by rigging. Nigeria will not get it right because Tinubu may not even finish his four years term if he becomes president of Nigeria by 2023.
Nigeria will be worse than it is under Buhari if Tinubu become President. I don’t hate him but this is what God is showing me about him as a prophet.  Neither Tinubu nor Atiku can make Nigeria better.
Ayodele also added that the 2023 general elections will not bring solution to Nigeria problem but only restructuring can solve the nation’s many problems.
“Nigeria will still be having the same problems we are having. The solution to our problem is not the 2023 elections, it will still put us in the same problems, if not worse. 2023 elections will put us where we are with insecurity and the economy. And the solution to our problems is restructuring, we will have freedom the day Nigeria is restructured.”
The cleric also described the Presidential candidate of the Labour Party (LP), Peter Obi and Rabiu Kwankwaso of the New Nigeria Peoples Party (NNPP), as noisemakers who cannot win presidency in the 2023 general elections.
“Peter Obi is a noise maker, he can’t make a single difference. Saying Obi will win the election is zero. “Kwankwaso is also a noise maker, he can’t win the election. Tinubu, Obi, and Atiku can’t solve Nigeria’s problem,  only restructuring can.”
Speaking further on the 2023 general elections, the leader of INRI Evangelical Spiritual Church, who is known for his ‘prophesies’ about political events in Nigeria and the global community, also said the date selected by the Independent National Electoral Commission (INEC), for the 2023 election is still shaking and may be changed.
In his ‘prophesies’,  the cleric also said if the governor of Rivers State, Mr Nyesom Wike leaves the Peoples Democratic  Party (PDP), that would mark the end of his political career.
Kindly share this story:
Share 0 FacebookTwitterWhatsappEmail
previous post