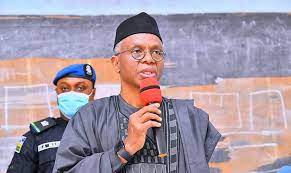 Kaduna State Governor Nasir El-Rufai has said gunmen terrorising the state are being assisted by scores of informants in many communities.

El-Rufai said the Kaduna state government, however, remains convinced that comprehensive, simultaneous military and security operation in the state and other states would help stop the terrorists.

The governor said this while speaking at the Hawan Bariki with members of the Zazzau Emirate Council in Zaria, Kaduna state on Tuesday.

Speaking at the event, Governor El-Rufai called on the traditional rulers across the state to mobilise residents of the state to expose the terrorists’ informants and support the security forces with local intelligence.

He added that the state government would continue to do everything it can to mobilise and support the federal security agencies to defeat terrorism in the state.

The governor said: “You will recall that my first official action as governor on 29 May 2015 was to summon an emergency meeting of the State Security Council which held on 30 May 2015, with the specific purpose of identifying the security threats across the state and finding answers to address them.

“One outcome of that meeting was the decision to collaborate with the governors of the other states in the North-west and Niger State to fund a joint military operation to clear the Kamuku-Kuyambana forest swathes in the Birnin Gwari axis of cattle rustlers hibernating in the ranges that cover Niger, Kaduna, Katsina and Zamfara States.

“While this action decimated the criminals, it is a matter for regret that the necessary follow up operations were not sustained by the security agencies.

“Seven years later, we remain convinced that comprehensive, simultaneous military and security operation in Kaduna, Katsina, Zamfara, Sokoto, Kebbi, Plateau and Niger states is vital to stopping the terrorists and reasserting the authority of the Nigerian state in the ungoverned spaces.

“We created a specialised Ministry of Internal Security, and we continue to support the federal security agencies with logistics and other resources.

“We are engaging the highest echelons of government and the security structure on resolute action to protect the lives, liberty and livelihoods of our people. The criminal elements are being assisted by a network of informants in many of our communities.

“We call on the traditional institution to mobilise their networks to expose these informants and support the security forces with local intelligence,” El-Rufai stated.

“This farming season, I wish to appeal to our people to farm massively wherever they can, to feed their families and the society at large.

“We are aware that in some places, farmers have been attacked, abducted, or even killed while working their fields. While that is being tackled, it is important that we should all get involved in farming. That is a concrete way to reduce hunger and food price inflation.”

El-Rufai equally called on people of the state to participate in the democratic process to select candidates for the 2023 general election.

“Your Highness, the political processes to select candidates for the 2023 general election have started. We call on our people to participate vigorously in this democratic process, and to make it a peaceful exercise in the freedom of choice.

“It is important to the integrity of the process, and to the safety of citizens that everyone should conduct themselves with respect for law and order.

“We appeal for responsible behaviour and decent utterances all through the push and pull of political competition.

“We cannot expect sustained development without a properly educated citizenry. That is why we have introduced free and compulsory education for the first 12 year of schooling.

“Despite removing the financial hurdle to education and imposing a lawful obligation to send all children to school, we are still contending with a significant number of out of school children and the persistence of street begging.

“We urge the Zazzau Emirate Council to join us in instilling in parents the importance of sending children to school and compliance with the law against street begging. We also need the support of our communities to nudge our youths away from drugs and to expose those dealing in these deadly substances,” the governor further added.

The governor, then, reiterated his administration’s commitment “to complete the projects of our urban renewal programme and leave physical infrastructure, human capital development, governance reforms, internally generated revenues and investments much better than we met them.”