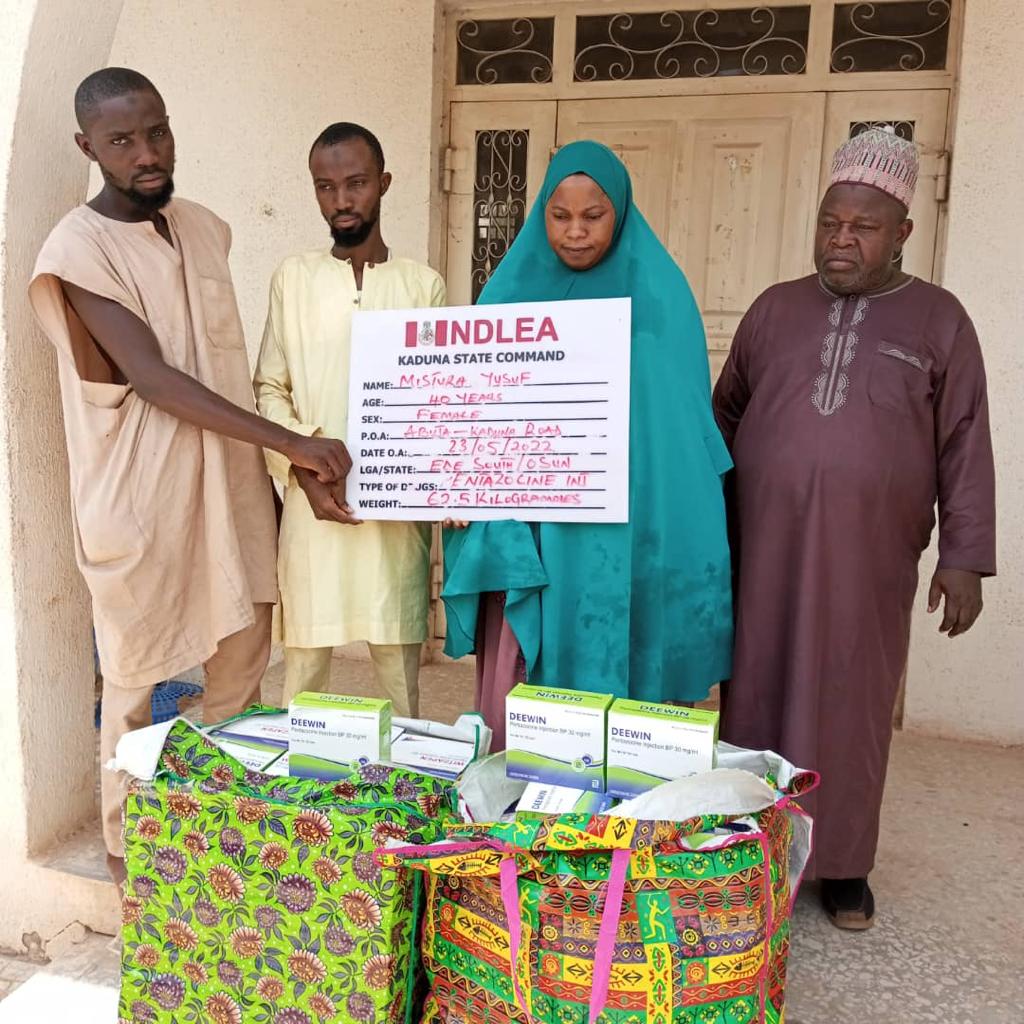 Attempts by drug traffickers to export parcels of Methamphetamine popularly called Mkpuru Mmiri locally concealed in Cornflakes packs and body cream containers to Malaysia and Australia have been foiled by operatives of the National Drug Law Enforcement Agency, NDLEA at Murtala Muhammed International Airport, Ikeja, and a courier company in Lagos.

As a result, two freight agents; Nneji Anoma And Etoh Barnabas involved in the bid to export nine parcels of Methamphetamine weighing 1.45kg hidden in packs of cornflakes to Malaysia through the NAHCO export shed of the MMIA on Wednesday 15th June 2022 have been arrested.
Another consignment of 10 cartons of Tramadol 225mg packaged as Tramaking containing 500,000 tablets with a total weight of 407kg and an estimated street value of Two Hundred Million Naira (N200, 000, 000) have been seized during a joint examination with the Customs at the NCS warehouse.

The consignment, which had arrived SAHCO import shed since 6th June from India via Ethiopian Airline was eventually transferred to the NDLEA by Customs on Wednesday 15th June.

The previous day, Tuesday 14th June, a similar joint examination with Customs at the Customs enforcement terminal, Tincan seaport, Lagos led to the seizure of 33 parcels of cannabis indica (Colorado) weighing 16.5kgs. The drug exhibit was recovered from a 40-foot container, TRHU 7874497 containing four vehicles. The cannabis coming from Montreal, Canada was discovered in three out of the four vehicles in the container.

In the same vein, operatives of the Directorate of Operations and General Investigation, DOGI at the Agency attached to a courier company have intercepted a kilogram of Methamphetamine concealed in body cream containers heading to Australia.

Meanwhile, the drug cartels also suffered losses in other operations across Adamawa, Borno, Kogi, Ogun, Zamfara and Taraba state. A notorious drug dealer, Abdullahi Musa, a.k.a Yerima Uding wanted for some past attacks on officers and men of the agency was in the early hours of Thursday 16th June arrested in Hong town, Adamawa state.

The 53-year-old suspect was caught with 57 blocks of compressed cannabis sativa, concealed in the boot of his ash coloured Toyota Corolla car with reg. no. GMB 185 MF. He has been fingered as the mastermind of the mob attack in Hong on 6th October, 2020 that led to the death of an NDLEA operative and another officer now bedridden due to permanent incapacitation.

In Borno State, another drug dealer Umar Musa was arrested in Tashan Kano, Gwoza LGA on Thursday 17th June with 8,000 capsules and tablets of Tramadol weighing 4.550kgs, while 32.182kgs cannabis were seized by NDLEA operatives along Okene/Abuja highway, Kogi state from a commercial bus travelling from Lagos to Abuja.

Following credible intelligence, operatives also arrested one Nwanbunike Chibuike, 22, with 19,576 tablets of Exol-5, Diazepam, Tramadol and Rohypnol as well as 7.9 litres of Codeine at Ogere, Ikenne LGA, Ogun state on Wednesday 15th June.
In Zamfara, a consignment of 11,660 tablets of Hyponox and 6,000 ampoules of pentazocine injection was recovered from a drug dealer, Success Amaefuna at Tsafe area of the state on his way to Sokoto state, while 5,000 tablets of Tramadol were seized from Darius John F. Mbugun, 33, who ordered the consignment from Onitsha, Anambra state.

The drug exhibit was concealed in a bag of gari for distribution in Gembu, Sardauna LGA, Taraba state.

Chairman/Chief Executive of NDLEA, Brig. Gen. Mohamed Buba Marwa (Retd) commended the officers and men of the MMIA, DOGI, Tincan, Adamawa, Borno, Kogi, Ogun, Zamfara and Taraba Commands of the Agency for the seizures and arrests of the past week. He encouraged them and their compatriots across other formations to remain vigilant and intensify their offensive action against the drug cartels in all parts of the country.