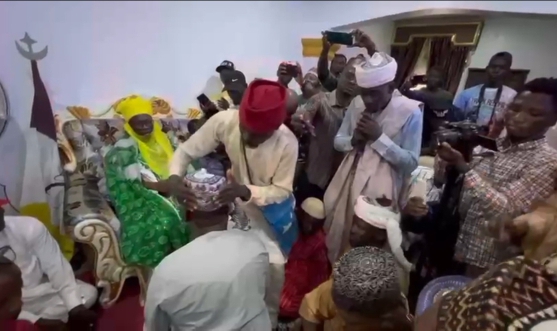 The National Youth Leader of the All Progressives Congress (APC), Hon. Dayo Israel, has donated cash to victims of flood in Tunga, a community in Awe local government area of Nasarawa state. This was during his Sunday visit to the town to commiserate with the people and inform them of the party’s plans to tackle the seasonal flooding exacerbated by climate change.

Israel who arrived Nasarawa State on Saturday to continue his nationwide engagement of young people and grassroots mobilizers in the interest of the APC, expressed the party’s concern over the spate of floods witnessed this year and the readiness of its presidential candidate, Asiwaju Bola Tinubu, to find a lasting a solution to the problem while also offering meaningful support to local farmers who constitute some of the worst affected.

He said: “I have just left Egypt where, as an emissary of our party and candidate, I joined other world leaders and delegates in serious deliberations focused on practical and immediate solutions to the challenge of climate change and its resultant calamities such as the floods we are witnessing at the United National Climate Conference (COP 27).”

“Let me assure you that help is coming. Your hope will be renewed. Asiwaju Bola Ahmed Tinubu will assemble the brightest minds to devise and implement practical solutions to all your problems, including jobs for the youths, support for farmers, and empowerment opportunities for women, just as he did in Lagos to international acclaim.”

Meanwhile, as a mark of honour for his contributions to youth development and national progress, the Sarkin Tunga, HRH Alh. Muhammad Ibrahim Shuaibu IV, turbanned Dayo Israel as the Wakilin Matasa of Tunga, a distinct honour that placed him in the class of accomplished individuals such as billionaire businessman Aliko Dangote who hold titles and serve as advisers to the Tunga traditional rulership.

Whilst bestowing the honour, the traditional ruler said he was impressed by Israel’s unwavering commitment to the election of Tinubu whom he said has demonstrated the capacity to deliver economic emancipation and visionary leadership from his time as the governor of Lagos.

He commended Tinubu’s inclusive style of leadership, noting that he has shown his willingness to work in the interest of all.

Earlier, Dayo Israel also paid a visit to the Emir of Awe, Alh. Isa Abubakar II, to pay homage and receive blessings for his engagement activities in the area.