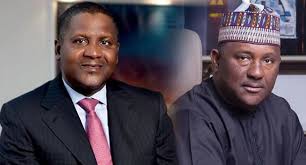 Nigeria’s largest companies have earned a whopping sum of N2.33 trillion as revenue in the first quarter of 2022, outpacing their earnings in the corresponding period of 2021 by 33.2%.

Freedom Post reports that the information was contained in the quarterly reports of these companies.

According to the compilation, 28 of the most capitalized companies on the Nigerian Stock market, operating in the manufacturing, telecommunication, oil and gas, and agricultural sectors grew their topline revenue from N1.75 trillion recorded in Q1 2021 to N2.33 trillion in the review period.

Most interestingly is the stellar 38.1% growth recorded in their operating profit at N614.25 billion compared to N444.89 billion recorded in the corresponding period of 2021.

This shows how the companies have been able to manage their operating expenses despite inflationary headwinds in the Nigerian economy.

The revenue growth recorded by the companies is remarkable, considering economic disruptions in the global economy occasioned by the ripple effect on energy, power, and food cost, amongst others, caused by the Russia-Ukraine face-off and the aftermath of the covid-19 pandemic.

Despite the rise in the cost of production, Nigerian businesses in the manufacturing sector have been able to shift this cost to their customers without affecting their margins despite the drop in sales volume.

However, its operating profit was able to shoot up by 62.5% as revenue from cement rose by 58.5% during the period under review.

Another typical example is Dangote Cement, whose revenue soared by 24.2% despite a 3.2% decline in sales volume.

For the oil and gas sector, upstream players like Seplat Energy gained from the bullish oil price in Q1, as its revenue ballooned from N57 billion to N100.6 billion YoY (74% increase).

Downstream marketer like TotalEnergies was also able to grow its operating profit by 47.6% despite a significant surge in production cost.

It is safe to say that the improvement recorded by the companies is mostly attributable to the increase in their sales price, due to inflationary pressure. What experts are saying

According to Ebitonye Atte, a research analyst at United Capital Plc, he noted that “following supply chain disruptions and the Eastern European crisis, companies that primarily export commodities, such as upstream Oil and Gas firms like Seplat, and palm producers, Presco and Okomu, have seen their margins boosted by increased commodity prices. Also, in the early parts of the year, global demand for commodities improved following the recovery from demand shocks seen in 2020 and 2021.”

“We expect the cement Industry to face significant cost pressures as a direct consequence of the Russia-Ukraine Crisis. Hence, the expectation is that all cement companies will face decent upward pressure on production costs because of mounting energy cost inflation. However, we expect that demand for cement and pricing power will continue to outweigh increases in the cost of sales for the rest of 2022,” he said.

Likewise, Ugochukwu ‘Ugodre’ Obi-Chukwu, the Chief Analyst at Nairametrics, while discussing at a Nairametrics Daily Reviews session on Twitter Spaces, he noted that companies that sell essential commodities, that is, those whose demand is inelastic, would always grow their revenue irrespective of changes in price.

Inelastic products are items whose demand does not change irrespective of economic factors, in this case, price.

“We noticed that a lot of Nigerian products are actually quite inelastic, meaning that no matter how much they are priced, you would still end up buying them. The only thing you can do will be probably to reduce the quantity a bit. So, if you are in that kind of business, your margins will still go up even if the volume might drop,” Obi-Chukwu added.

Freedom Post reports that the stellar growth recorded by the companies suggests increased activities in the Nigerian economy, which would suggest some level of growth in the nation’s gross domestic product for Q1 2022. Nigeria’s economy had expanded by 3.4% in real terms in 2021 following a covid-induced recession experienced in 2020.

However, the Central Bank of Nigeria has maintained an expansionary monetary policy by keeping interest rates low, which means cheap credit in the economy and more liquidity to fund more spending.

This monetary direction helps in spurring growth in the economy, as there would be more activities across various sectors, although it is believed that an expansionary monetary stance could be counter-productive as it could quicken the inflation rate.

In terms of ranking, the top five companies by revenue in the first quarter of 2022 were MTN Nigeria, Dangote Cement, Flour Mills, Nigerian Breweries, and Nestle Nigeria.

It was closely followed by a pharmaceutical company, GSK with revenue growth of 113% to stand at N7.36 billion.

The likes of Seplat Energy, Notore, and Okomu Oil made the list of fastest revenue growth in the period under review with 74%. 71%, and 63% revenue growth respectively.

While considering the operating profit of the companies, Dangote Cement led the list with N182.8 billion, closely followed by MTN with N149.3 billion, while Seplat Energy was third on the list with N42.43 billion.

It is however worth noting that Cadbury Plc recorded a 495% growth in its operating profit, CAP Plc and Seplat Energy grew their operating profit by 218% and 151% respectively.

I will declare a national security emergency on May 29, 2023 if elected president of Nigeria – Hayatu-Deen