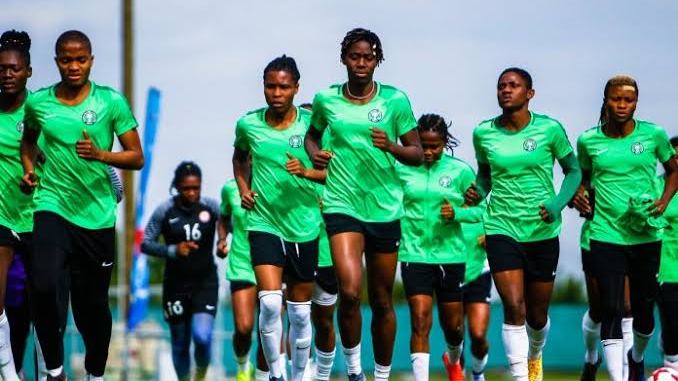 Share 0FacebookTwitterWhatsappEmail
Kindly share this story:
There appears no end to the woes bedeveling women football in Nigeria on daily basis, the latest being that the country’s women U-20 national team, the Falconets now treck to training ground as they prepare for next month’s FIFA U20 women World Cup scheduled for Costa Rica.

The players who train every day inside Moshood Abiola National stadium Abuja are now on their own as the leadership of the Nigeria Football Federation (NFF) prefer to focus on their personal affairs.

At the moment, most of the board members of NFF and Congress men especially chairmen of various state FA are in Morocco, venue of the ongoing African Women Cup of Nations (AWCON).

Rather than focus on football development, NFF President Amaju Pinnick is reportedly throwing everything he has on his perceived third term ambition.

Freedom Post gathered that two weeks to the U20 women global football championship beginning August 10, 2022, the Falconets have been unable to play any serious friendly match.

Since their camping began in Abuja, the 2010 and 2014 World Cup finalists managed to play two friendly matches with Abuja-based Naija Ratels and against low-rated U-16 team, an Abuja-based Football Academy (FC Roma).

Both matches had no arrangement for match officials to handle the game. The coaches had to call on a man who came to watch the national team play to reluctantly officiate the match, Freedom Post reports.

Earlier this week, the Super Falcons in Morocco refused to train in protest for their unpaid match bonuses and allowances ahead of their third Place match against Zambia.

The players were still lamenting after NFF grudgingly gave each of them only $1000 as camp allowance, with backlog of match bonuses yet to be paid till third place matchday.

NFF hierarchy was yet to react as at the time of filling this report.

Talking about 2022 FIFA U-20 Women’s World Cup, Nigeria girls will face France on Thursday August 11 at the San Jose Estadio Nacional, before they locked horns with Korea on Sunday August 14 at the Alajuela Morera Soto Stadium.

At the venue, Canada will test their power with the African side on August 22 at 8pm.

Only four countries, namely Germany, Brazil, USA and Nigeria have played in all editions of the FIFA U20 Women’s World Cup since the competition was launched as a U19 championship in Canada 20 years ago.