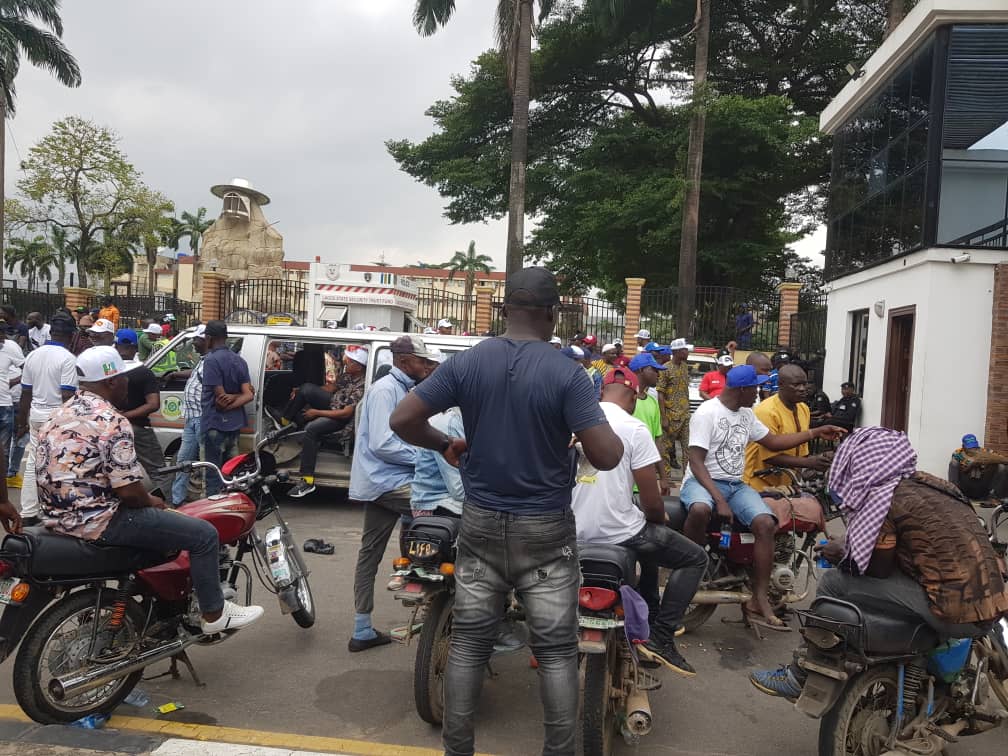 The state government had earlier in May this year banned activities of okada in six LGs and nine LCDAs, making a total of 10LGs and 15LCDAs covered by the ban.

Leading the protest Comrade Tijani Pekins MOALS Lagos State Zone C Chairman, in a chat with newsmen, appealed to the state government to engage the association and work out modalities to safe millions of members, whose livelihoods will be grossly affected by the enforcement of the ban.
Pekins said many of their members are law abiding citizens who will never undermine the security of the state, “if security of lives and property remains government’s primary objective, definitely it is everybody’s business.

“Restriction is still far better than total ban and looking at the people this government want to send to the labour market, it is over 10 million.
“On insecurity we are still battling boko haram, herdsmen and banditry, you should understand that this multitude that by implication of the ban will be out of jobs, we have schools cert holders and graduates amongst us.

“This is a personal business we engage ourselves in to make ends meet, mind you the total ban will also have multiplier effect on the chains of commerce that revolves around our various units and zones of operation, especially food vendors, mechanics,vulcanizers, spare parts dealer and others.

“Government should not just focus on the riders, they should look at the multitudes they will send back to the labour market and where is the job?

“We were not even invited for their one-day stakeholders meeting, our passionate appeal to the government is that they should let us be as indicated in the letter we have submitted.
Pekins however, said the Chief of Staff to the Governor Mr. Tayo Ayinde received their letter with a promise that, “pending when this issue will be resolved there will not be any enforcement of any kind on our members.

He also recounted the fact that when a BRT bus was involved in an heinous crime of kidnap, rape and murder of a young lady, the government did not consequently put an end to BRT operations, instead massive sensitisation was embarked on to reform their operations, “ on our own we are engaging members in weekly and monthly seminars to ensure better conduct amongst them”.

“ We have also put it to the government through the Chief of Staff to go and investigate, a legitimate Okada rider will not get involved in criminality.

“We are ready to sanitize our members with the help of the government , all we pray for now is a constructive dialogue to resolve the matter.” Pekins said.

Another leader of thought in MOALS, Comrade Martins AbAbdulrahma Chairman Zone I, noted that the protest is purposely held to plead with government that many of their members are card carrying members of the All Progressives Congress, who already have their PVCs and by implication the ban will affect their livelihoods, which might eventually pose threat on the electoral fortune of their party.

“We have been with Asiwaju since the AD era to AC,ACN till now in APC,all our members have PVC and during political period we and the artisans and market women usually trooped out for rallies in campaign for our party.

“When you ban the Okada riders now are we going to bring out bankers for rally? How many of them vote during election? We vote many times, from the congress, primaries and even the general election.

“Look at all those Igbo guys at Alaba, Ladipo all have their PVCs and they are happy that we who are members of Asiwaju’s political fold are being removed from the scene and they are comfortable of having a field day in the coming election, which would consequently be a shameful thing for us.

“That informs why his insignia is on our clothes and cap that we are for Asiwaju and we are here to stay, if they accept our plea or not, but we would love that they accede to our plea, they have said they don’t want us on highways and bridges.

“Any bike man operating on highways now if not a police officer will likely belong to the Army, Navy or even Airforce, it can never be a MOALS member.
“We reverence our government as well as the state and won’t subscribe to anything that will threaten the peace here.

“We are aware that many are involved in crimes but we cannot say we will disband the entire Police Force because someone stole wearing Police uniform, or because a Danfo bus had an accident we will rid the road off all commuting vehicles, wherever you have thousands of people intruders will be there.

“Many will hide under the shield of the group to perpetrate evil, but none of our members can rob with an Okada, we have 21 zonal Chairmen who are quite in charge in their zones, if the police caught any Okada operator involved in any crime, after thorough investigation they will get to know that he is not a MOALS member.

The protesters, who came early this morning and were still gathered at the gate leading to the Lagos State House of Assembly Complex, with police officers seen on duty around the place, said the decision of the government to ban okada in the affected areas, which they projected could lead to total ban in the entire state by December, did not come at the right time considering the poor state of the nation’s economy.

This was just as they noted that should the ban remain in place, crime rate could increase as many could be forced into it due lack of legitimate alternative to sourcing for income to feed their families.

Comrade Adeleke Adegboyega aka Big Boss, who is Zone S Chairman in charge of Kosofe, said they came to plead with Governor Sanwo-Olu to reconsider the ban on okada, because the present situation in the country did not support the decision.

Adegboyega said that with the latest ban, more than 20,000 okada riders would be affected, noting that on the average, an operator had a minimum of 10 family members he had to cater for, wondering what would become of such person’s fate thereafter.

“We are pleading with the government to have a rethink on the ban, those who are doing legitimate business would not commit crimes, we are not criminals.

“Government should not allow people to go into crime. If you ask that they (okada riders) should stop doing their business, people would go into crime.

“Crimes are not committed alone with okada. Look at the issue of train attack in Kaduna, they were not committed by those who are legitimately engaged in okada business.

“I beg the government to see what they can do. On our part, we are doing our best possible to sanitize our members. The situation is not good now to impose ban on okada business in the state,” he said.

Comrade Azeez Ayorinde, Chairman, Zone H, who also spoke with our correspondent, called on Governor Sanwo-Olu to come to their rescue, noting that banning okada business in the state would have a ripple effect.

According to him, it is not only the riders that will be affected, saying those who deal in spare parts, the mechanics, the food sellers, among others would also suffer for lack of patronages, adding: “There is no employment anywhere now.”

“Those who are into okada business, they went into it because there is no other business for them,” he ssid.

Speaking further, Ayinde equally said the unit led by him had also been involved in sanitizing the business, by ensuring enforcement on the highways, but quickly noted that some uniform men had often time been found to be violating the state Traffic Law in that respect.

“We are not in support of crimes, we are pleading with Governor Sanwo-Olu, he should temper justice with mercy.

“We know ourselves. We are not criminals. I have my children in school, if they stop okada business, my children will stop schooling. I don’t want my children to turn to labourers,” he said.

He said they came on a peaceful protest because no leader at the top hierarchy of the union was ready to speak for them and let the government know the problems they were passing through.

Another leader, Comrade Abiodun Ibrahim, who is chairman, Zone N, covering Mile 2 down to Ibeju- Lekki, said given the systematic approach adopted by the state government on the ban issue, there could be total ban across all the nooks and crannies of Lagos by December this year.

According to him, this could lead to idle hands, saying it was for this reason that the state government should come to their rescue.

“Idle hand is devil’s workshop, that’s the saying. That’s the major reason government has to come to our aid. We are not happy with the situation, let the government come to help.

“We are protesting in a peaceful manner. We have graduates among us here. If any child is abandoned, what would happen? Okada is not the only thing that is being used to commit crimes,” he said.