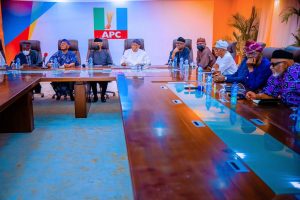 There was mild drama at the ongoing APC Southwest Meeting when the Minister of Interior, Ogbeni Rauf Aregbesola arrived with the Vice President, Prof. Yemi Osinbajo but refused to sit near the National Secretary of the All Progressives Congress (APC), Sen. Iyiola Omisore.

According to Freedom Post source at the meeting, it took the intervention of the former governor of Ogun State, Aremo Olusegun Osoba who told the Minister to seat anywhere convenient for him.

It was also gathered that before the arrival of Osinbajo, advanced security was sent to comb the Lagos State House Marina as the Vice President was said to have claimed that he was not sure of his security at the place.

There are strong indications that the meeting would be a long night because of the serious issues that are expected to be discussed by the attendees.

Chief Bisi Akande and Aremo Olusegun Osoba were said to have called the meeting last week to meet presidential aspirants under the APC Platform from South West.