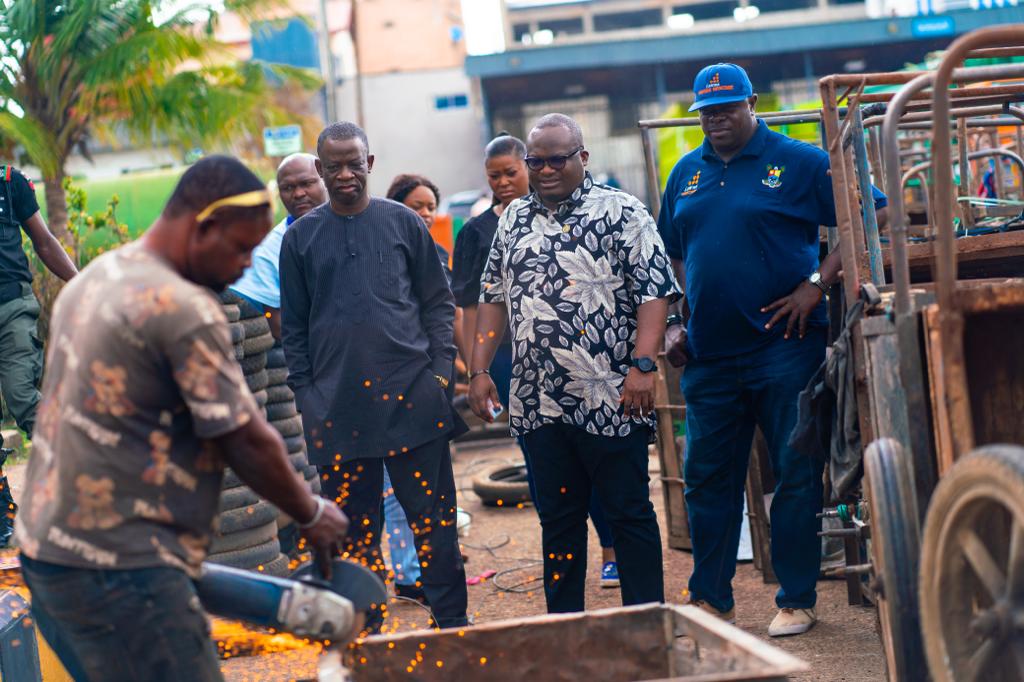 Share 1FacebookTwitterWhatsappEmail
Kindly share this story:
Lagos Waste Management Authority (LAWMA) has secured jail terms of two months imprisonment, for three persons, for various environmental offences, with a pending judgement for another person who patronised a cart pusher.
This is coming on the heels of the agency’s collaboration with the police to put a stop to incessant attacks on LAWMA’s personnel, ensuring prompt arrest of cart pushers and for those who patronise them.
The Managing Director/CEO of LAWMA, Mr. Ibrahim Odumboni, made the disclosure in his office on Tuesday, at Ijora-Olopa, noting that the working arrangement with the police, was aimed at sustaining the renewed offensive on all forms of environmental infractions and unwarranted attacks on the agency’s personnel.
He said, “Last week, we got jail terms for three environmental offenders, with a pending sentence for another person who patronised a cart pusher, making it an offence for anyone to patronise a cart pusher. Before now, we had warned unrepentant environmental violators about our renewed offensive, urging them to shun bad practices. But some people will never change. For three such persons, we secured jail sentences of minimum of two months while one is still pending”.
“I am also happy about LAWMA’s collaboration with the Nigerian Police to end needless attacks on our personnel on day or night duty. That collaboration is also to put an end to cart pushing, as any cart pusher found anywhere in Lagos will be promptly arrested and prosecuted, while those who patronise them will not be spared”, he stressed.
Speaking further, he noted that another set of 600 carts have been destroyed, bringing the total to about 3,000, in the last ten weeks.
He warned residents against patronising cart pushers, as both the cart pusher and the patron were liable, and would be accordingly prosecuted.
He said, “We have demolished carts impounded by our enforcement team in the course of their duty. This is to further reinforce our stance that the activities of cart pushers across the Lagos metropolis remain banned. We will not allow anyone or group of persons to undermine the ongoing efforts to establish a sustainable environment”.
Odumboni reiterated the Authority’s willingness to absorb willing cart pushers into the waste management system in the state, by offering them an opportunity to serve as uptakers of recyclable items, working hand in hand with other stakeholders in the waste management chain.
“The ill effects of cart pushing on our environment and security structure, mean that we have to eradicate it, to preserve lives and properties. Criminals now hide under the guise of cart pushing to carry out heinous crimes. However, as I stated earlier in the year, we are offering an opportunity to willing cart pushers to work with us, as offtakers, and by so doing have viable means livelihood”, he stated.
The LAWMA boss reaffirmed the agency’s total commitment to making the metropolis sustainably clean, urging residents to support the Authority’s efforts, by shunning improper waste disposal, paying their waste bills and patronising assigned PSP operators.
For complaints and inquiries on waste management issues in your area, please call LAWMA toll-free numbers: 07080601020 and 617, .
Kindly share this story:
Share 1 FacebookTwitterWhatsappEmail
previous post