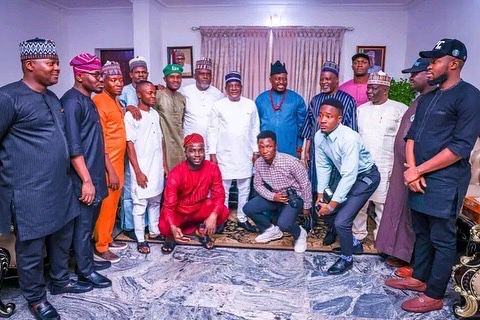 APC’s National Youth Leader, Hon. Dayo Isreal, has reiterated the capacity of Plateau State Governor and the Director General of the APC Presidential Campaign Council, Governor Simon Lalong, to lead the party to victory at the polls next year.

He said after completing a tour of the state earlier this week as part of his nationwide youth mobilization exercise. Dayo noted that Governor Lalong’s “exceptional performance uniquely qualifies him to lead the party’s charge in 2023, beginning with the hosting of a campaign flag-off which already promises to beat all previous records set by any political event in the country’s history.”

He said: “My engagements with the citizens and residents of Plateau State, most especially the youths, have corroborated what we all know to be true about Governor Lalong’s credentials as a leader and politician.”

“I am happy to tell all Nigerians that he is an exceptional model of the progressive brand of leadership because no single LGA in Plateau State is without visible and highly impactful developmental projects and investments initiated and completed by the Lalong-administration.”

“With such track records of excellence, his position as the leader of the campaign is not only justified but will also spur support for our party in Plateau, the entire middle belt region, and other parts of the country.”

“I am confident that Nigerians will choose a party led by visionary leaders like Governor Simon Lalong who has offered transformative and inclusive leadership, under which young people are empowered to fulfil their God-given potential. This is what the APC is all about, and it is a brand of leadership that Asiwaju introduced when he took office in 1999 and set the ambitious vision of upgrading Lagos to a mega-city.”

Dayo met with Governor Simon Lalong, the APC governorship candidate in Plateau Dr Nentawe Yilwatda, and other members of the state cabinet and the party’s leadership after hosting an interactive town hall with youth support groups and grassroots mobilizers in the state.

During his meeting with Dr Nentawe, he urged for greater inclusion of young people, particularly in the formation of the state’s cabinet and other administrative agencies if the party prevails next year.

Conceding to Dayo’s request for the allotment of proportionate appointive slots to young people, Dr Nentawe emphasized his commitment to inclusive leadership and the serious task of mentoring the next generation of leaders, similar to what Asiwaju Bola Tinubu has accomplished in his years as a political actor.

He said: “Asiwaju has shown an example that anyone serious about transformative and sustainable leadership must follow. No other political figure today has shown a greater faith in youth potential than our presidential candidate, and the evidence is not far-feteched. Most of our current leaders across various levels received his mentorship. Vice President Osinbajo, Minister Babatunde Fashola, Minister Rauf Aregbesola, Governor Babajide Sanwoolu and many others served him as aides and through his guidance were able to attain greater heights.”

“I believe I have the same mandate with regard to the youths of Plateau State. I fully intend to prepare our youths for the future through investments that will yield jobs and empowerment opportunities. This will be done through a special trust fund set aside for young people and other vulnerable groups. My faith in youth will be demonstrated through meaningful inclusion in leadership and support to achieve self-sustenance.”

Plateau State will host the campaign flag-off of the APC on Tuesday, November 15. The Governor recently inaugurated a 40-man Local Organising Committee (LOC) to ensure the success of the event.