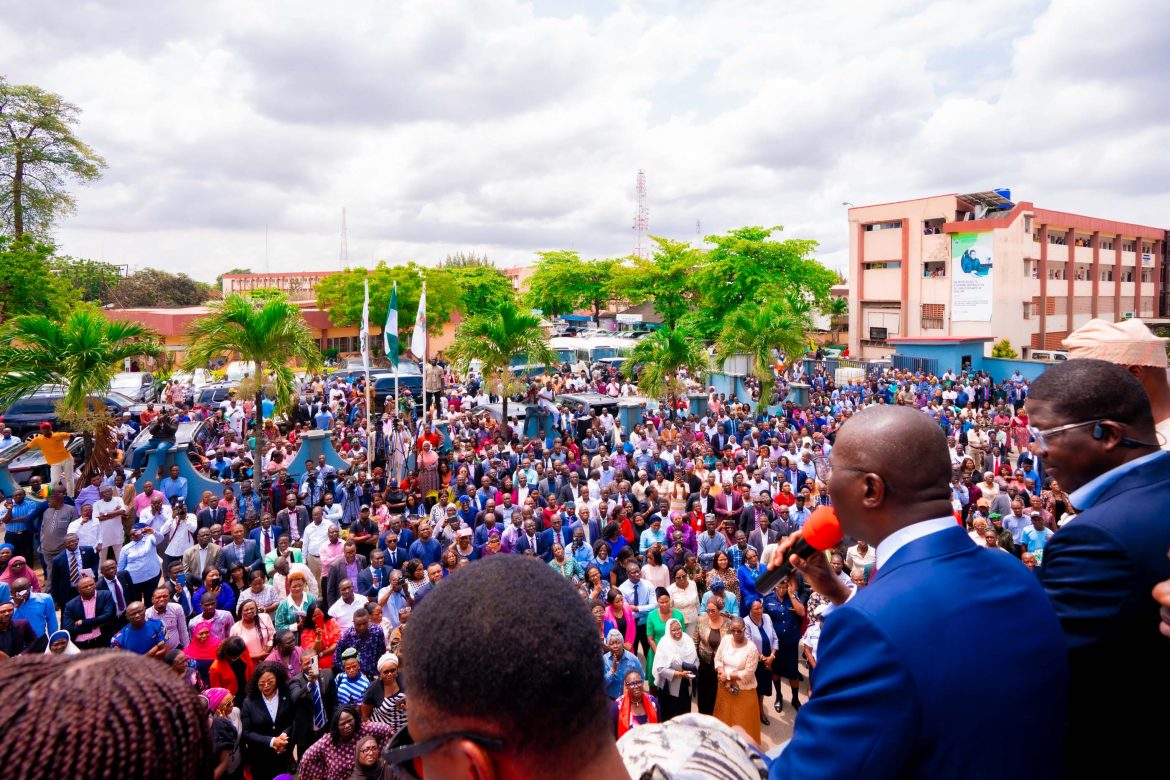 The event marking the World Teachers’ Day in Lagos State turned into a platform to share testimonies of the positive transformation recorded in State’s teaching service by the administration of Governor Babajide Sanwo-Olu.

Teachers cheerfully shared their experiences in the last three years, giving Sanwo-Olu a pass mark in raising the standards of education through investment in infrastructure and capacity building.

At the symposium organised by the Lagos wing of the Nigeria Union of Teachers (NUT) at the NUT Pavilion in Ikeja, Lagos teachers unanimously threw their weight behind Sanwo-Olu, endorsing the Governor’s re-election bid.

Akintoye said not only had the teaching environment been made more conducive for teachers, he noted that there had also been improvement in the performance of pupils in national examinations.

The NUT chief said the Governor met and fulfilled majority of demands of the teachers without any confrontation, thereby limiting the prospect of disagreement between NUT and the Government.

Lagos, he said, pioneered the creation of the Permanent Secretary/Tutor General position, which is the apex cadre in teaching career, and designated six slots for teachers across the six Education Districts in the State.

Akintoye added that Sanwo-Olu’s approval of career harmonisation in teaching service placed thousands of Lagos teachers on grade Level 17 – the highest level. This, he said, made Lagos the pace-setting State in the transformation of the teaching profession.

He said: “In Lagos, teachers have not had any major demands which the Government has not prioritised. It is only in Lagos teachers are promoted and get salaries of the new grade level before the promotion letters get to them. It is in Lagos that thousands of teachers are on Grade Level 17 when their colleagues in other states are either stagnant at Level 14 or demoted.

“On occasion of World Teachers’ Day in Lagos, it is about showing appreciation to the leadership of the State. We are using this opportunity to tell our Governor that we have a large number in the teaching service, and this has never been a burden to the system. Come February 2023, we will mobilise not only ourselves, but also our families and relatives to make the election work in your favour.”

NUT National President, Comrade Audu Titus Amba, sent a note of appreciation to Sanwo-Olu on behalf of Lagos teachers, stressing that Lagos Government had lifted the teaching profession and set enviable standards in the State.

Represented by Comrade Titi Adebanjo, NUT National Secretary, Amba said: “In some states, apart from the Governors being afraid to meet with teachers, Sanwo-Olu can walk confidently among teachers because he has raised not only the standards of teaching in Lagos, the Governor has also improved on the welfare package for teachers to make teaching rewarding.”

Sanwo-Olu described teachers as “important stakeholders” in moulding behaviour and creating a functional society. He said his administration’s efforts towards boosting teachers’ capacity through capacity building led to over 10,000 teachers benefiting from various initiatives to refresh their teaching skills.

The Governor said priorities were placed on career progression of teachers in Lagos, making their promotion an annual exercise while ensuring prompt implementation of benefits and earnings due to them.

He said: “Today, I join our resilient and outstanding teachers in celebrating a legacy of excellence, dedication and commitment built on the foundation of a unique profession that involves the promotion of the complex personal development of young minds in preparation for future roles as responsible citizens. No Society can deliver quality education without placing premium value on its teachers. While many only expect the Almighty God to reward teachers, it is our firm resolve that our teachers must receive and enjoy the rewards for their labour, first here on earth and then, later in Heaven.

“As a teacher-friendly Government, we developed various initiatives to enhance teaching and further motivate our teachers. Our commitment to increasing the capacity of our teaching staff is visible through local and international training. Over 10,000 teachers have been exposed to various training programmes to hone and refresh their teaching skills. To ensure that we don’t lack teachers in any subjects, we introduced an Exit-Replacement Policy, which ensures prompt recruitment of qualified teachers to replace the ones that retire. This has created employment for over 6, 000 qualified teachers in the last three years.”

Sanwo-Olu urged teachers to always uphold the ethics of their profession and continue to show uncommon sense of responsibility and greater commitment to duty.

He pledged his administration would continue to accord priority to investment in education, while also improving the capacity and welfare of teaching personnel. The Governor said Lagos schools would further become more ICT-compliant, as he promised to expose teachers to international best practices.

“I urge you not to relent in your effort to impart quality knowledge in our children. You are the diamonds set in gold rings for this noble profession. As partners, we will appreciate your continued commitment and support in achieving an effective and efficient education system for the benefit of our dear citizens,” the Governor said.

In a show of appreciation, the teachers honoured Sanwo-Olu with an Education-friendly Award.