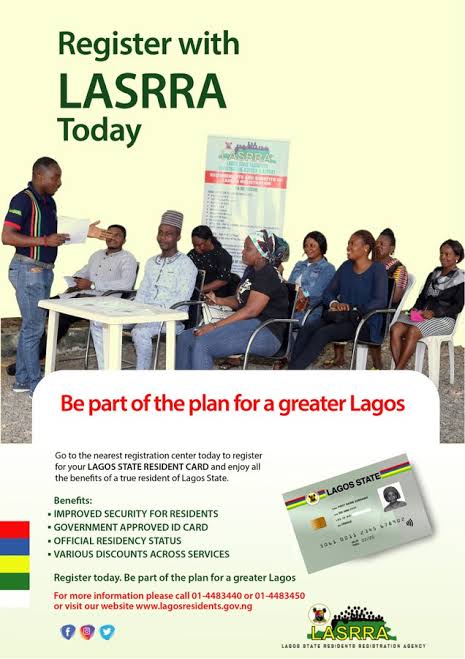 The launch will happen, simultaneously, across the five divisions of the State: Ikeja, Badagry, Ikorodu, Lagos Island and Epe.

Kasunmu, added that one of the key highlights of the day would include live demonstration of the smart card, its benefits as well as the unveiling by Mr. Governor.

Speaking on the new LAG ID Card, Engr. Kasunmu disclosed that the new card is embedded with more features and functionalities to offer the card holders wider and faster access to services provided by the Lagos State Government.

In her words: ‘‘The new LAG ID Card is a multi-application smartcard that offers registered residents access to services ranging from ‘a means of personal security and identity verification’ at points of accessing various government services, to applying for loans from Lagos State Employment Trust Fund (LSETF).”

In addition, card holders can also use it as a payment card for services across multiple vendors including buses and ferries; supermarkets, as well as cash withdrawals from banks’ Automated Teller Machines (ATMs).

Engr. Kasunmu appealed to residents in the State who have not registered to do so by visiting the website www.lagosresidents.gov.ng.

She noted that once registration is activated online, residents would need to visit any LASRRA Registration Centre nearest to them so their biometrics may be captured to complete the process, adding that registration is absolutely free.

Also, she urged those who registered in or before 2018 and those who have changed their names and/or addresses, to effect changes by validating/updating their records with the same process, after which they would be called upon to pick up the new LAG ID Card.

Kasunmu, stressed that one of the reasons residents with the old cards need to do this is because the upgraded LAG ID is embedded with a multi-applet chip module which stores some of the updated biodata and biometric details of the resident for real-time validation and verification of identity.

She explained that the old identity card was only for identification purposes.

‘‘Holders of the old card need to update their records to obtain the new LAG ID Card with a validity period of 5 years. The new card allows flexibility, to onboard more features and expand usability in view of fast-changing technology trends,’’ she stated.

Engr. Kasunmu further said that other advantages of the newly upgraded LAG ID Card include easy access to educational services for children and students at all levels of education, as well as quicker access to healthcare services from the state-owned facilities.

The General Manager emphasised that the LAG ID Card project is pivotal to the Lagos Smart City initiative, for key purposes of planning and distribution of infrastructure, security, social protection, financial inclusion and disaster and emergency response management to mention a few.

Among the dignitaries expected to grace the event are Hon. members of the Lagos State House of Assembly, members of the State Executive Council, traditional rulers across the State, religious and community leaders, heads of market men and women, different Associations, artisans’ corporate organisations as well as students at all levels of education.