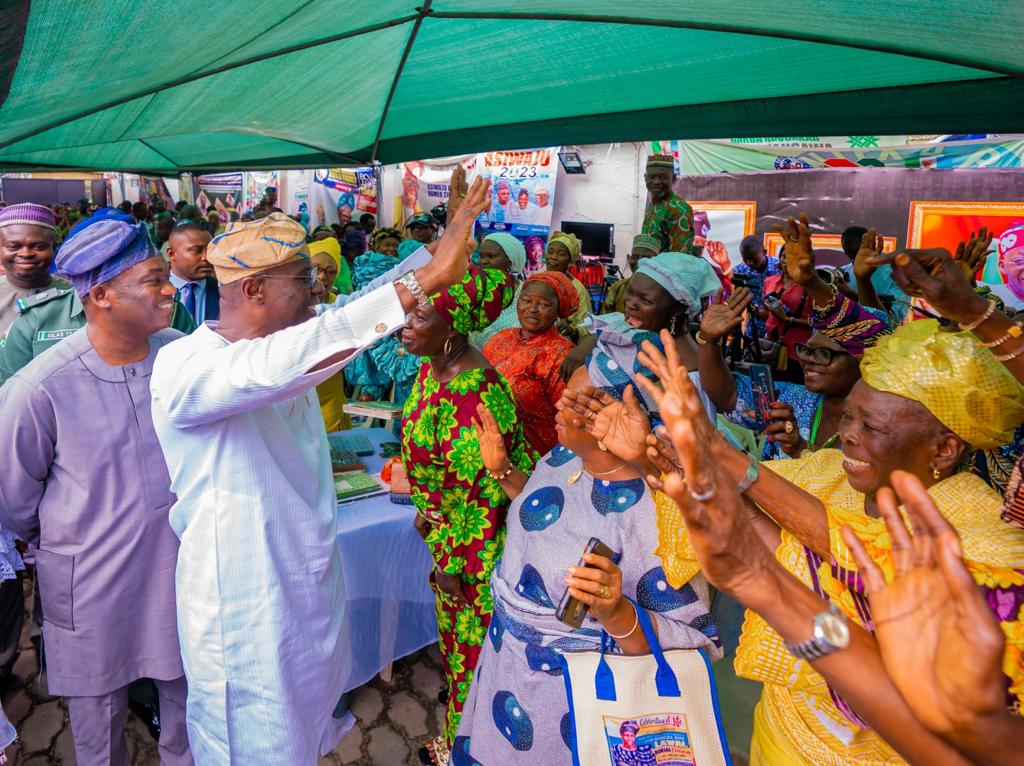 Lagos State Governor Babajide Sanwo-Olu has extended his ongoing political consultation to markets and community of traders across the State.

The Governor, on Tuesday, met with all market leaders in Lagos under the aegis of Association of Commodity Market Women and Men of Nigeria. The meeting was held at the Alausa residence of their President-General, Mrs. Folasade Tinubu-Ojo.

Sanwo-Olu, who described marketers as “important stakeholders” in the governance of the State, said the visit was part of his wide consultation ahead of the general elections, noting that the interaction with traders in the informal sector was strategic in reaching out to the grassroots.

The Governor reassured the market leaders of his administration’s commitment to their well-being and asked for their full cooperation as to their support for the APC in the coming elections.

He said: “Market leaders and their members are important stakeholders in the governance of Lagos. We interact with them from time to time and consult them on issues concerning growth of our markets. Today, we have come here to thank them for the support they have continued to give our Government and to encourage them to continue to be loyal citizens of the State.

“This venue has been a strategic meetinghouse for discussion with market leaders on socio-political issues. It was from this same house that Asiwaju Bola Ahmed Tinubu left and was sworn in as the Governor of Lagos in 1999. Since then, this edifice has been the spot of convergence for all the market leadership in Lagos. The visit today is to reassure market men and women about our commitment to their well-being and to ensure we have their full cooperation as to their support for the progressives party.”

Sanwo-Olu told the traders that the Government had hastened up ongoing work to complete all the markets currently being constructed.

The Governor announced continuation of credit grants to 100 micro and small businesses in each market across the State, stressing that the intervention had empowered many women and low-income households to meet their needs.

Sanwo-Olu took the opportunity to share the benefits of good governance reaped by the State in education, transportation and health, among others, noting that his administration’s programmes were aimed at improving the lives of residents, regardless of their incomes and status.

The Governor said: “We are in the season of politics and we consider it necessary to meet with our people in the market and solicit for your support in the forthcoming general elections, especially for our presidential candidate, governorship candidate and other positions our party is vying.

“This is an important step, you are part of the crop of people that diligently wait at the polling booths to cast votes for our party. We cannot take you for granted, despite having new people in the electoral register. We need to engage and talk to you about our plans. In this case, we are seeking their support for all our candidates in general.”

The traders, in the course of the discussion, raised issues affecting them and advised the State Government on possible areas of improvement and collaboration.

Iyaloja-General, Tinubu-Ojo, assured the Governor of market leaders’ continued support for the party, pledging to mobilise members of their households and communities to vote en masse for APC in the State and at the federal election.