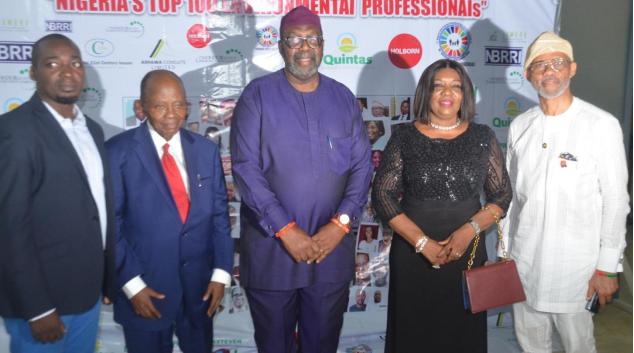 It was more like a family gathering as Nature Hedge, publishers of Environment Africa Magazine, feted guests to a small dinner at the 2022 Sustainability, Environment and Advocacy Awards, held at the BWC Hotel in Victoria Island, Lagos.

Among the recipients was the Honorable Minister of Water Resources, Engr Suleiman Adamu who was honoured with the SEA Award for Public Service Delivery in the Water Sector.

According to the organizers of the event, Engr Adamu had, since his appointment as Minister of Water Resources had overseen a transformation of the water sector in Nigeria; revitalising the almost moribund river basin development authorities to be more effective and strategically important to their catchment operational communities, even instituting the Songhai model into their operational processes. He has also ensured continuity in project delivery having focused almost 90percent of his ministry’ works on projects initiated by the past administration, thereby reducing the spate of abandoned projects and also projecting a fresh consciousness as government beyond administrations.

Represented at the Awards Dinner by Otunba Olufemi Odumosu, Chief Executive of the Ogun Osun River Basin Development Authority (OORBDA), the Minister in a speech lamented the fact that issues around water and sanitation (SDG 6), have unfortunately been an overlooked component of the general global climate change movement. This, he said necessitated the state of emergency declared in 2018 by President Muhammadu Buhari which led to the signing of Executive Order 009 for Clean Nigeria Campaign in 2019.

The Honourable Minister, who was also unveiled as one of Nigeria’s TOP 100 Environmental Professionals, identified funding gaps as the major challenge towards ensuring attainment of the SDG Goal of Water for All; and while appreciative of the efforts undertaken so far, seeks the support of both large and smaller scale private sector investors to join hands to leverage on a yawning opportunity to build capacity and create jobs in an untapped market opportunity.

The sentiments of the Honurable Minister were echoed by the Commissioner for Health, Lagos State, Prof Akin Abayomi, who was honoured with the SEA AWARD for Sustainable Public Service in the Health Sector. Professor Abayomi, who has won multiple awards over his unflinching dedication to ensuring strategic and better health outcomes and his handling of the Covid-19 pandemic as Lagos State Deputy Incident Commander.

Prof. Akin Abayomi appreciated the organizers of S.E.A Awards for the honour bestowed on him but said the award was not just for him but for all those who worked with him; while also appreciating the Lagos State Governor who gave him the opportunity of leading from the front.

Prof. Abayomi remarked on the necessity of developing BioSecurity and OneHealth as key development strategies and mentioned that OneHealth is positioned to be the most important factor in Human and Environmental Sustainability interventions.

Other recipients of the S.E.A Awards included Prof. Samson Duna, Director General of the Nigerian Building and Road Research Institute (NBRRI) for Sustainable Construction Innovation while the Nigerian Conservation Foundation was bestowed with the Pioneer Award for Environmental Advocacy.