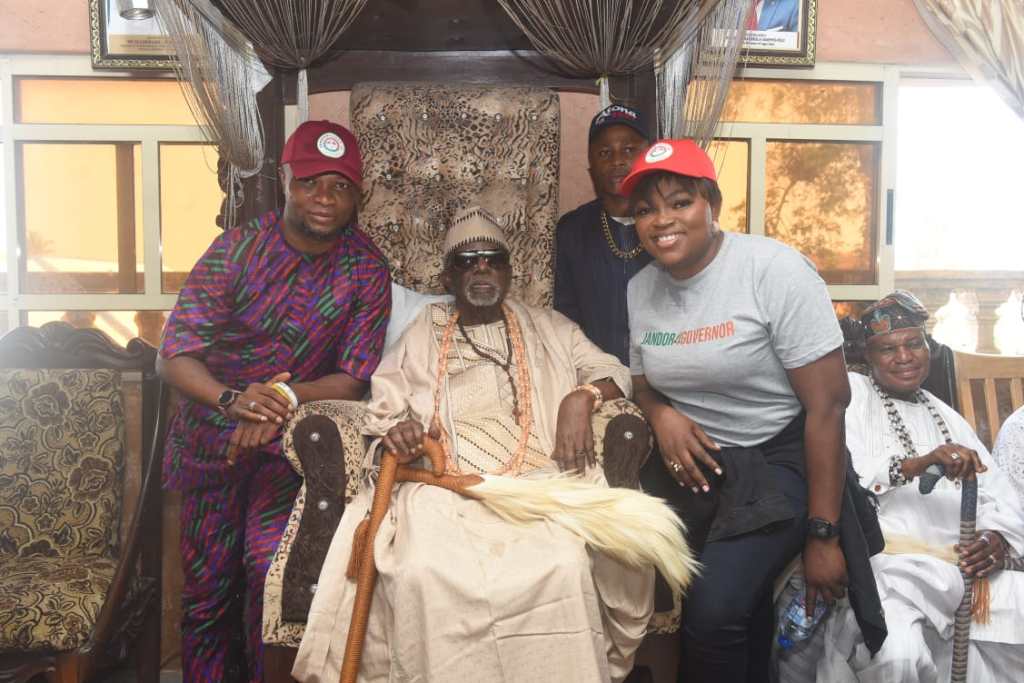 The Governorship Candidate of the Peoples Democratic Party (PDP) in Lagos State, Dr. Abdul-Azeez Olajide Adediran (JANDOR) on Saturday took his campaign to traditional rulers in Badagry Division of the state, seeking blessings from royal fathers.

Adediran also assured the traditional rulers and residents of the area that he would bring the government nearer to them and provide them with basic things of life.

Speaking amidst a rousing welcome at the Palace of the Akran of Badagry Kingdom, Oba De When Aholu, the Menu-Toyi 1, said that Badagry Division would not remain backward under his government.

The candidate who went on the visit with his running mate, Olufunke Akindele, called for the support of the royal fathers and people in the division, saying that they had suffered enough.

According to him, his administration will bring development to Badagry, construct bridges and make the division an investment destination for investors.

“I want to congratulate you this time around because ever since the return of democracy no one considered Badagry Division for the governorship seat in Lagos State. That I got the PDP ticket is predestinated by God.

“I want to thank you for standing by us and for your prayers. I want to congratulate this division, especially my fathers that in Lagos it is the turn of Badagry royal fathers. It is good luck to Badagry.

“I was trained in this house and my fathers and mothers are here today. It is our turn to serve. I have not come to play politics, but to seek your blessings.

“You are the fathers of all and we have come to seek your blessings. We are not at war with anybody and our government would be for the masses,” he said.

JANDOR told the Obas that his team had decided to tour all the wards in the state and that it was the turn of Badagry.

He decried the state of the roads in the division, which he said had been in bad conditions, saying that he would not be in government and the situation would remain the same.

“We are going to have Coconut Island in Badagry just as we have Banana Island. We will construct bridges in the division,” he said.

He advised the division to vote for all the candidates of the PDP in the general elections slated for February 25, 2023, and March 11, 2023.

Adediran, while addressing the teeming party’s supporters at the palace said that his team had prepared to run a humane government that would prioritize the masses’ interests.

Also commenting, Akindele, a Super Nollywood Filmmaker told the traditional rulers that she joined JANDOR to give hope to women, children, and the youths in the state.

She said: “I am promising you that I will do you proud, I will not disappoint you.”

Speaking on behalf of the traditional rulers in the division at the palace, the Oniworo of Iworo Kingdom, Oba Oladele Kosoko said: “Only a child will not know what Badagry Division is going through.

“Whoever God has chosen to help our division will get there. We, as fathers, will continue to pray for you.”

He urged the politicians to campaign based on issues and avoid violence.

Speaking at Wards G and F in Badagry Local Government area in Ajido, Dr. Adediran said that God has written it that a time was coming that a son of the soil would be the next Governor and that He had chosen someone from the riverine area.

He stated that they have been supporting people from other places to be governors in Lagos State, but the time had come that it should no longer be given to just anybody.

“We have been going everywhere, we were in Alimosho for three days. It is time for the son of the soil to do it. No matter what happens we will see some of us who want the status quo to remain. But we will not fight them.

“Just call them to one side and discuss with them, you will discover that they are selfish because they are the ones benefitting from a government that does not care for the people.

“We want to have a government of the masses. I used to travel on the water with my mother and I am used to this place, so I want to develop it.

“We want to appeal to our traditional rulers to help us. Some of these people would come with money and the money is to take away your rights.

“Are you still spending the money they gave you four years ago? You can see the difference between the Baales here and those in the city,” he said.

The Governorship Candidate urged the youths to talk to their friends, including those in the APC, and let them know that it is time for the son of the soil to take over.

He added that the likes of top politicians in the area such as Hon. Sunny Ajose and others in the APC and the PDP would be recognized in his government.

According to him, people can be in another party, but they would vote for him as their son.

He said: “All the Deputy Governors and APC party chairmen that they have been giving us what have they achieved?

“I can tell you that even the Chairman of the APC in Lagos State, Pst. Cornelius Ojelabi would vote for the PDP in 2023. I told him before I started the race. When I become the governor I would take care of him.

“I am not going to be a PDP or APC Governor, I would be the Governor of all. Since they have been ruling they have not been able to complete Badagry Expressway unlike what they did in Lekki.

“When we get into office, we will construct bridges in Badagry. Don’t be afraid, it is just eight hours on election day and they cannot rig this election. We have been winning them in Badagry Division all along.”

Speaking earlier, Olufunke Akindele urged the people to continue working and not to be tired, while expressing satisfaction with the reception given to them.

“I am happy with the way you welcomed us, you are too much.

“We are ready for a better life in Lagos from May 29, 2023, when JANDOR would assume office.

“They have given women a chance as Deputy Governor, we will give people soft loans and there will be free education for our children. We will get local tailors to sew school uniforms for our children so they they can also make money,” she said.

The program was attended by Baales and traditional chiefs, including the Oba Kosoko of Iworo Kingdom,
Oba of the Ajido Kingdom, who was represented, Baale of Jegene, Chief Sumaila Lukmon and Baale of Jegenu Ayaba, Chief Fasasi Shittu, party members, and residents of the area.

The campaign team also visited the popular Agbalata market and other major markets in Badagry to seek the support of traders and business owners.

Polaris Bank gets new board and management team