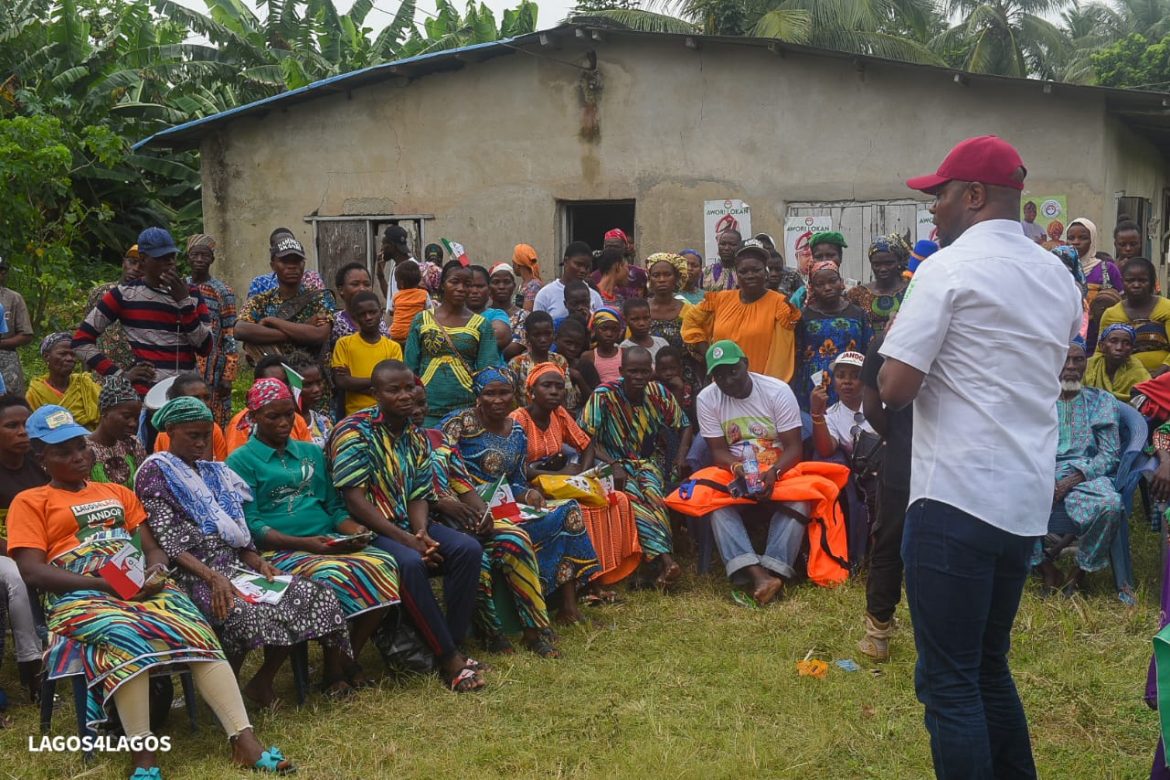 The governorship candidate of the Peoples Democratic Party (PDP) in Lagos State, Dr. AbdulAzeez Olajide Adediran aka Jandor has promised to provide free education and free uniforms for the pupils and students in the state if elected to serve.

Adediran, who spoke in some riverine communities in Ojo Local Government area of the state in continuation of his tour of the 245 wards across the state on Tuesday October 25, promised to run a masses-oriented government.

Speaking in Igbo Oja community, Jandor stated that it was time for an Awori son to serve, adding that he would form a government, which impact would be felt all over the state.

The Governorship Candidate assured the people that it was time for Badagry Division to enjoy what others are enjoying, saying that education would be the priority of his government.

“I am coming to serve the masses. I came from a humble background, but my parents pushed me and I was educated, which is why I am here now.

“I know what I went through in school, when teachers sent me home regularly because of torn uniform and I would hawk mats and coconut for my mother to raise money to buy another one. But if I get there, we will buy clothes for all the pupils and students in the state.

“All these uniforms would be sown by tailors in the the different communities in the state for the children. All our artisans, who became motorcycle (okada) riders would go back to their jobs as we will give them jobs.

“They have been dredging our water to make money, but in our government the dredging companies would be made to employ 30% or 40% of our children as workers.

“When we were coming from Ikoga near Badagry two days ago, one of my people fainted, and when we branched at a health center there, what we had in our first aid box was more than what they had there. My Deputy, Funke Akindele burst into tears,” he said.

Jandor then urged the people to vote for the PDP in all the elections, saying that the first set of three elections would determine what would happen in the one that would come two weeks later, which include that of Governorship.

“Be careful of those who are not from Lagos that want to go the Senate, Federal House of Representatives and the Lagos State House of Assembly.

“When the people from the other party come, tell them to show you the projects that they have done since the last 23 years.

“If you vote their candidate to be president, he would disturb my own election two weeks after.

“But once they lose, it would be easy for me to win or else they would block our victory. If they love us, Badagry Division would not be like this.

“I never expected that someone from Badagry Division would get here. I am the next Governor of Lagos State by the grace of God. They cannot block what God has done for me. They tried to block my ticket, but God put them to shame,” he said.

Adediran revealed that his Deputy, Funke Akindele, was told to go to markets to assure the women that if any market leader should close their market for a day after we they must have won, she would be sent to the prison.

He stated that his mother used to be a trader in mats, and that no market would be closed for a single day.

This was repeated in Irewe and Idoluwo communities, where he said that he was challenging the people with the campaign.

Jandor later went to the Palace of the monarch of Irewe, the Osolu of Osolu Kingdom, Agunbioyinbo 2, Oba Abideen Adekanbi Durosinmi, who led a prayer session for him and assured him of the support of the residents.

Some residents of Igbo Oja, who spoke during the tour requested for social amenities for the community.

Mrs. Senayon Akinsue, a resident, requested for water and electricity as well as solar system for the community, while Imam Hassan Lawal from Agoni
advised the residents and members of the PDP in the community to be united, support and vote for all the candidates of the party in the 2023 general elections.