…where the playing field is levelled
© 2022 | FREEDOM POST- All Right Reserved
Home » ‘It’s not fun’ but citizens should be able to ‘question and criticize their leaders without fear of reprisal’ : Biden lectures Saudi Prince, others on human rights
Foreign affairs

‘It’s not fun’ but citizens should be able to ‘question and criticize their leaders without fear of reprisal’ : Biden lectures Saudi Prince, others on human rights 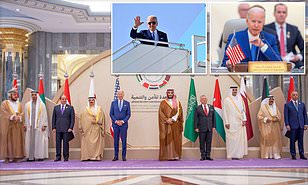 He said that no country gets it ‘right all the time’ but leaders need to accept criticism and grow from their mistakes.

‘No country gets it right all the time, even most of the time, including the United States,’ Biden said in his remarks to the GCC+3 summit. ‘But our people are our strength. Our countries with the confidence to learn from the mistakes grow stronger.’

Saudi Crown Prince Mohammed bin Salman Al Saud was among the leaders listening as Biden gave his lecture. The president, however, didn’t mention by name Jamal Khashoggi, the Washington Post journalist who intelligence agencies said was killed at the prince’s orders.

His meaning, however, was clear, when he said that citizens should be able to ‘question and criticize their leaders without fear of reprisal.’ Khashoggi was critical of MBS and his plans for the kingdom.

Biden said he’s gotten plenty of criticism himself over the years and while it’s ‘not fun’ it helps the exchange of ideas.

‘I’ve gotten plenty of criticism over the years. It’s not fun. But the ability to speak openly and exchange ideas freely is what unlocks innovation,’ he said. ‘Accountable institutions that are free from corruption and act transparently and respect the rule of law are the best way to deliver growth, respond to people’s needs, and I believe ensure justice.’

After the meeting concluded, Biden boarded Air Force One at the King Abdulaziz International Airport, spending less than 24 hours in Saudi Arabia.

The speech outlined Biden’s vision for the Gulf region and the American role there.

It came at the end of his four-day trip the region, his first as president.

In his remarks, he again vowed to keep Iran from getting a nuclear weapon and pushed for stronger ties among the countries in the region. Biden wants to see Israel more intergrated to help counter the growing threat of Iran.

‘We will not walk away and leave a vacuum to be filled by China, Russia or Iran,’ he said. ‘We will seek to build on this moment with active, principled, American leadership.’

Biden concluded by promising the United States would stay involved in the Middle East region.

Biden spent the final day of his trip holding formal one-on-one meetings with the leaders of Iraq, Egypt, and the UAE as he worked to reassert U.S. influence in the region.

The president formally invited the leader of the United Arab Emirates to the United States by the end of the year as he kicked off day two in Saudi Arabia with a trio of meetings with Arab leaders.

‘Challenges you face today only make it a heck of a lot more important we spend time together,’ he told UAE President Sheik Mohammed bin Zayed Al Nahyan. ‘I want to formally invite you to the States.’

The Sheik, who assumed office in May, conceded that he was new to the job, but working hard.

The 79-year-old Biden, who won his first federal election in 1972, joked that he was new too, getting a laugh from the Sheik.

The UAE is part of the ‘I2U2’ that met partially in-person and part virtually on Thursday, while Biden was holding meetings with Israel’s Prime Minister Yair Lapid – part of the president’s four day trip to the Middle East.

The I2U2 consists of the United States, Israel, the UAE and India.

But UAE’s leader met in-person with Biden in Jeddah, Saudi Arabia Saturday as part of the GCC + 3 – bringing together leaders of the Gulf Cooperation Council countries – Saudi Arabia, Kuwait, the UAE, Qatar, Bahrain, and Oman – as well as the heads of state of the United States, Egypt and Iraq.

Biden talked about Iraq’s move to democracy in his meeting with the wartorn country’s leader.

‘I want the press and you to know we want to be helpful as we can in doing that,’ the president told reporters in the room.

Later in a readout of the meeting, the White House said the leaders ‘reaffirmed the importance of forming a new Iraqi government responsive to the will of the Iraqi people and their respect for Iraq’s democracy and independence.’

‘President Biden underscored the importance the United States places on a stable, united, sovereign, and prosperous Iraq, to include Iraq’s Kurdistan region,’ the readout said.