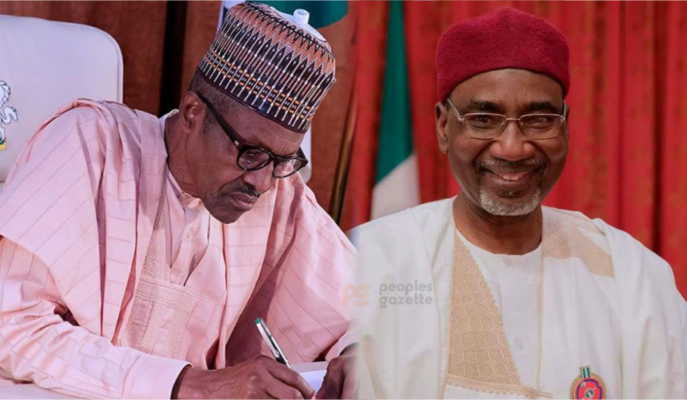 President Muhammadu Buhari should desist from appending his seal on decisions he does not understand, directors in the Nigerian Intelligence Agency (NIA) have said in a secret memo seen by Peoples Gazette.

The directors unanimously noted with dismay several decisions Mr Buhari has made after being “deliberately” misguided by his aides and advisers as a result of “selfishness”. All these they attributed to the president’s inability to pay rapt attention to matters.

“As the head of this massive entity call Nigeria, sometimes your, aides, advisers and handlers, may, out of selfishness and vested personal interest, deliberately mislead you, to unwittingly do some things against, your known principles, unfortunately, because, they know, that sometimes, due to some urgent numerous state matters that need your urgent attention you may not necessarily be too meticulous about everything,” the directors said in the letter.

The letter was written to Mr Buhari amid claims that the president is considering tenure extension for the current NIA director-general, Ahmed Abubakar. Appointed on January 10, 2018, Mr Abubakar’s tenure is expected to expire in January 2022.

The directors described Mr Buhari’s decision on the tenure elongation as a “wrong one based on a wrong advice”. Nonetheless, they admitted that some of the president’s decisions are borne out of inadequate facts of situations.

“We learnt that the tenure of the current DG, which comes to an end in January 2022, is being considered (for extension) or has been secretly renewed,” the spy chiefs noted. They alleged the repeated and “intense lobby” for tenure elongation for the heads of the security agencies.

“We have known all along that there has been clandestine and sometimes open intense lobby to mislead you to take the wrong decision, as was done in the last appointment,” they said. “Please excuse our use of this language to describe your last decision on this matter as a wrong one based on very wrong advice. With all sense of humility and modesty.”

The NIA directors believed the president could not have approved the appointment of Mr Abubakar in 2018 if he had been duly informed about circumstances against his appointment.

“There is no way you will knowingly approve any illegality and/or anything done without due process as the last appointment of the current DG,” stressed the spy chiefs.

They pointed out that Mr Buhari flouted the National Security Agencies Act, which specified that the NIA DG should be appointed on the advice of the national security adviser. The spy chiefs said Babagana Monguno, the current NSA, had told the National Assembly that he was unaware of Mr Abubakar’s appointment when the president authorised it in 2018.

The spokesperson for Mr Buhari, Femi Adesina, declined to reply to The Gazette’s request seeking comments on Mr Buhari’s reaction to the secret memo.

Controversies had trailed the appointment of the current director-general, as critics, including a Bauchi senator, Isa Misau, argued that Mr Abubakar was unqualified for the position. Many described the president’s decision as a “breach of national security.”

A civil society group, Concerned Nigerians, had also sued Mr Buhari at the Abuja Division of the Federal High Court over the appointment of Mr Abubakar as the substantial director-general of the intelligence agency.

Citing sections 14 (3) 2 (3) of the Nigerian Constitution, the group sought to know whether the president had the power to appoint Mr Abubakar and if he was competent enough for the position.

Coronavirus Today: California is not exactly leading by example