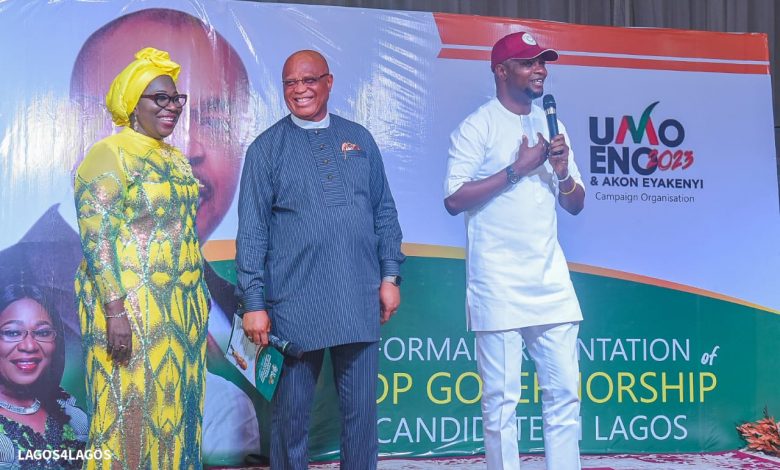 The Governorship Candidate of the Peoples Democratic Party (PDP) in Lagos State, Dr. Abdul-Azeez Olajide Adediran (JANDOR), has said that he would take the wealth of Lagos from the pocket of one man and redistribute to all Lagosians when he becomes the governor.llll

Adediran made the promise yesterday at the formal presentation of the PDP Governorship Candidate in Akwa Ibom State, Pastor Umo Eno to the Akwa-Ibom community in Lagos State. 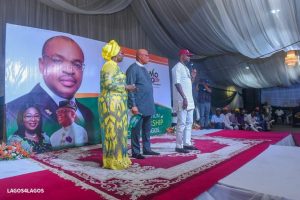 The Lagos PDP governorship candidate explained how he would be the first independent governor of Lagos State and how his administration would give Lagos residents a new lease of life.

“When I become the governor of Lagos State next year by God’s grace, I will take the wealth of Lagos from the pocket of one man and redistribute to all Lagosians.

“We will provide a new leadership in Lagos State. We will check the excesses of motor touts as well as Iyaloja and Babaloja in the state.

“Anyone that closes any market in the state would be sent to prison. I am not going to have any godfather.

In his speech, Pastor Umo Eno said that he was excited to be back Lagos State, where he said he started living in 1968/1970, when his father, a police officer, was transferred there from Enugu State.

Eno explained that Udom Emmanuel saw what others did not see, and that he takes him as his father, who he said made him an adopted son with the stakeholders of the state including former governor Victor Attah.

While promoting to build on the successes story of Obong Emmanuel, he said that the election is a referendum on the performances of the outgoing Governor.

“The Government of Obong Udom Emmanuel has done so many projects in Akwa Ibom State such as good roads, street lights, walkways, fountains, dualised roads and others, and he has made us proud.

“When the standard bearer of the PDP, Alhaji Atiku Abubakar came to flag off his campaign in Akwa Ibom, he said that Nigeria wants to be like the state.

“The Governor is building the fourth longest bridge in Nigeria. He has opened Akwa Ibom by air, land and see.

“With this, you don’t have too much business in Lagos. Its time to go back home, Udom is working. We will send you logistics to come home to vote, while those here should vote for the PDP,” he said.

The Governorship Candidate said that Akwa Ibom was fast developing, adding that the election is not a popularity contest, but that it is about a need and impactful assessment.

The cleric-turned politician stressed that Akwa Ibom is about what one has done and what he could do, saying that people could now touch any local government in Akwa Ibom from Uyo under one hour.

“Governor Udom Emmanuel has given us peace. Akwa Ibom is not broken, we need to continue the trajectory of development.

“We have “Arise Agenda” to show that God that has done it before would do it again. We want to ensure that we all have dividends of democracy and take it to the grassroots. We will have proper farm settlement with hostels and facilities.

“We will have people work in those farms. We will build on security and we will block waterways and provide adequate security, fund education.

“I will create 5,000 Non-Governmental jobs. I will start small and grow fast. There are many other things we would do employment,” he said.

Representative of Governor Udom Emmanuel, Elder Samuel Bassey, who spoke earlier, said that Lagos is special to Nigeria and that it is the 31st Local Government of Akwa Ibom State.

Bassey said that since Lagos State has decided to support Pastor Umo Eno, nobody could stop him, saying that he would continue the projects of outgoing Governor Udom Emmanuel.