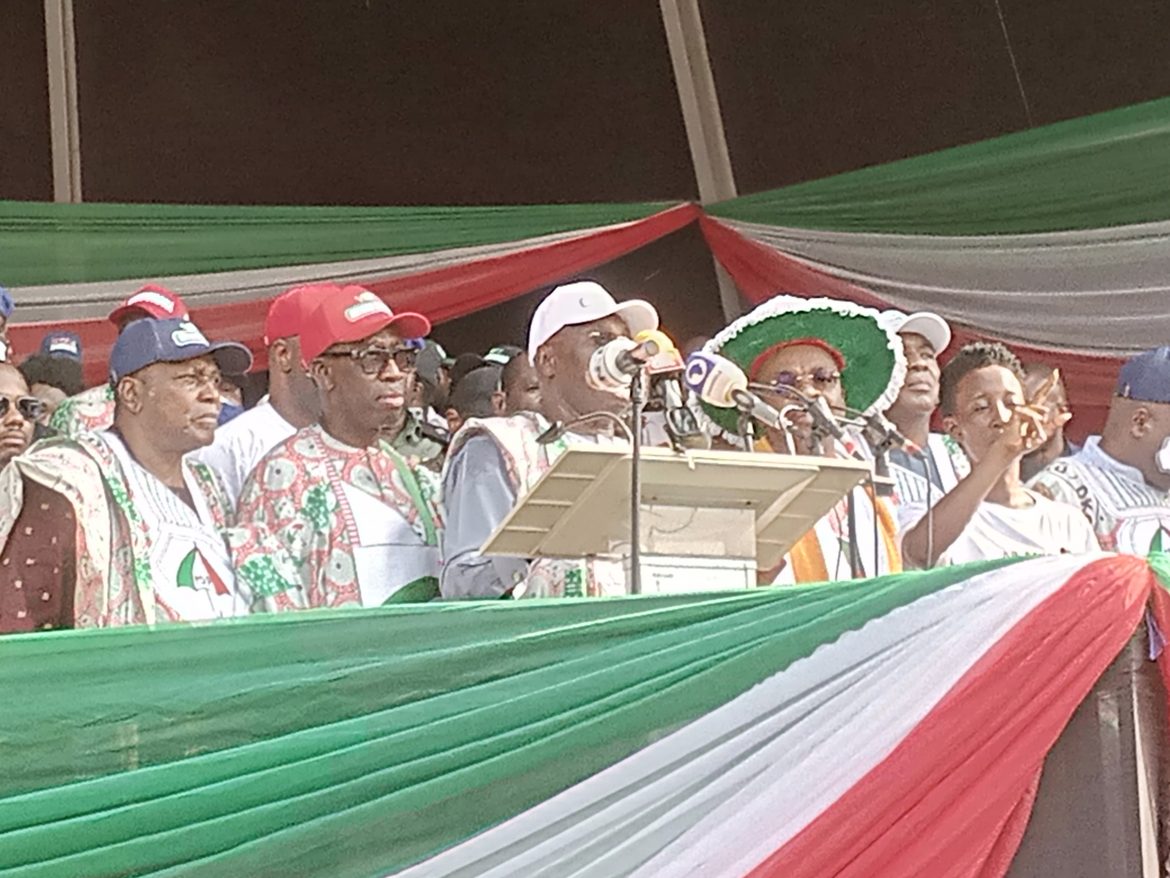 The presidential candidate of the main opposition party, the Peoples Democratic Party (PDP), Alhaji Atiku Abubakar has promised to set aside USD10m to empower the youths when he comes the president of Nigeria.

Atiku made the promise in Lagos on Monday during the PDP presidential campaign rally at Tafawa Balewa Square (TBS).
The PDP presidential candidate who said the All Progressive Congress (APC) lied by claiming it developed Lagos, said he has come to liberate Nigerians from the poverty inflicted on them by the ruling party.
“Lagos residents need to liberate themselves from a family government that has led them in the past twenty three years to a people’s government which will be led by Jandor
“I have also come to liberate you from the poverty inflicted on you by the APC government.
I will set aside USD20m to empower the youths when I become president.
Don’t worry where I am going to get the money from, by the time I privatise Kaduna, Warri and Port- Harcourt refineries, I will get the money”, Atiku said
Meanwhile, the PDP governorship candidate in Lagos, Dr Abdul-Azeez Adediran Olajide, popularly called Jandor who spoke earlier at the rally said, there was need to recover Nigeria to rescue Lagos, and that can only be done by voting Alhaji Atiku Abubakar as the next president of Nigeria.
He lamented how deplorable things has become under the ruling APC particularly in Lagos where he described as 22 years of hardship under the APC.
“I will build a Lagos that will work for all of us and not just one man. They have been enriching themselves in the last 23 years, we must put a stop to this.
“When Sanwo-Olu took over from Akinwumi Ambode, the poverty rate in Lagos was at 4.5%, now it has risen to 8.5%, Unemployment in Lagos was 14.6% when Sanwo-Olu took over, today it is 37.6%.
“They said they have invested N20 billion in creating employment through the Lagos State Employment Trust Fund, but unemployment rate is increasing everyday”, Jandor said.
Also speaking at the rally, the National Chairman of the PDP, Sen. Nyocha Ayu said Lagos was going to be liberated  because liberating Lagos means liberating Nigeria because Lagos is strategic being the economic hub of the country.
“Lagos is a rich state, there should be no poverty in Lagos, that is why we bring you hope.
Vote Jandor, he will ensure you are not overtaxed. He will deliver you from multiple taxation when he becomes governor”, he said
Ayu handed over the flag of the party to the governorship candidate.
Other members of the PDP presidential campaign council who spoke at the rally were Vice Presidential candidate and governor of Delta State, Patrick Okowa, former Speaker of House of Representatives, Yakubu Dogara, wife of the presidential candidate, Mrs Titi Atiku, governor Udom Emmanuel of Akwa Ibom state, among others.
Kindly share this story:
Share 0 FacebookTwitterWhatsappEmail
previous post