…where the playing field is levelled
© 2022 | FREEDOM POST- All Right Reserved
Home » I will declare a national security emergency on May 29, 2023 if elected president of Nigeria – Hayatu-Deen
Politics

I will declare a national security emergency on May 29, 2023 if elected president of Nigeria – Hayatu-Deen 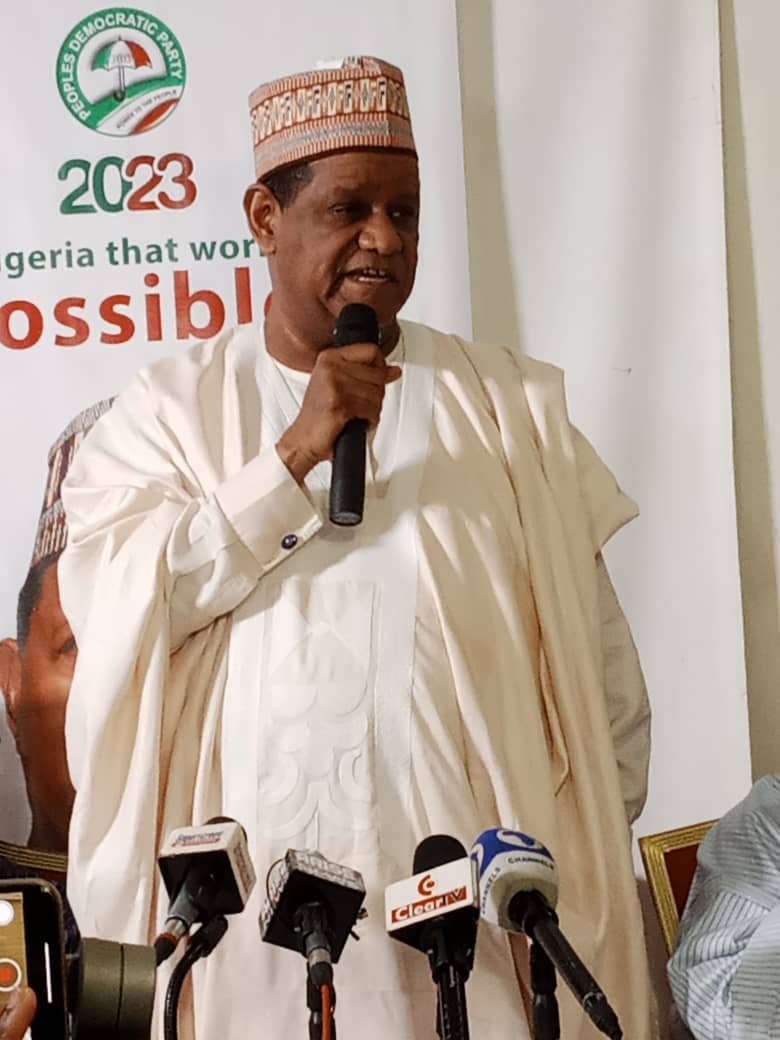 Mohammed Hayatu-Deen, a presidential aspirant under the Peoples Democratic Party (PDP), has condemned President Mohammadu Buhari’s led administration on the security situation in the country saying he would declare a national security emergency on May 29, 2023, if elected president.

The presidential aspirant made the promise while seeking the support of delegates of the Peoples Democratic Party (PDP) at the White House Hotel on Joel Ogunaike Street, GRA, Ikeja, Lagos on Thursday.

The financial experts said that national security goes beyond guns and bullets, but to putting things in the right places.

The aspirant said that it is wrong for any leader to just stay in the presidential Villa comfortable while things are going wrong in the country, but that he should be with the people, work with them, relate with them and be a humble servant of the people.

He added that there is a need for equity, fairness and justice and that people cannot be fooled all the time, and that there is a moment in Nigeria’s history when we are facing a monumental problem like the one the nation is facing one

Hayatu-Deen who said that he has spent almost half of his life in Lagos State and also traversed the length and breadth of the country said that Nigeria used to be a beautiful place to live, where everyone was happy and felt secure.

“Unemployment is at its peak and the number of youths, who are about 70 million, are angry and discouraged.

“I have always given a helping hand to the country. I was a member of the Committee on Privatisation. I worked closely with former President Olusegun Obasanjo between 1999 and 2007.

“What I am saying is that I am fulfill prepared to rule the country based on my background and experience as an economist, banker and strategic planner. I have built a strong relationships across the country and have traveled all over the world.

“I have the character and I believe that I have the right values conferred on me from childhood, my work ethics also work for me. I hate to see people suffer, be hungry or be denied access to what they deserve. I have concerns about the country and I will serve you honestly,” he said.

He added that most of the crisis in the country is on account of a broken economy that has been left unattended to for many years.

According to him, there is no need for any man to carry a cutlass to go and kill others if he has gainful employment.

He said that having been a turnaround and tested manager he would use his experience for the country and rehabilitate the economy of the nation.

The politician said that the first thing is to stop the bleeding of the economy and stabilize it with reforms from poverty, lack of access to the utility, good schools and other facilities.

He said that the nation should be industrialises like South Korea, UAE and others.

“You must have a special system that works. We must emphasise certain ethical values and reconstruct the nation to bring sanity back into society.

“I will mobilise the people and speak to them. Also, we are largely fragmented and disunited. I will like to bring Nigerians together and celebrate our unity in diversity. Wherever I have worked I bring people from all over the country together.

“I have seen a nation in this kind of situation before and I am going to declare a national security emergency when I get into office. I will pick up where the president leaves and revamp its economy.

“We need energy security, climate security. We are still living in the past when others have gone far,” he said.

He added that the people have the right to hold their leaders accountable and throw them out of office after four years or return them.

“So, May 28, 2022, is going to be a watershed and we should see it as an opportunity to give a better future to our children. I have every confidence that on that day we will get the votes from your side,” he said.

He stated that there has been rural-urban migration over the years unlike what happened in the era of the late Chief Obafemi Awolowo when the rural areas were conducive for people to live.

Giving an instance of Lagoa State, he said that the population has increased astronomically leading to crime and other problems, saying that there should be more rural development and create jobs in the rural areas through agriculture.

“We need to create jobs, expand national outputs. Our population is growing faster, if there is no output, how people get jobs,” he said

NCC advises telecoms consumers on how to avoid cyber attacks