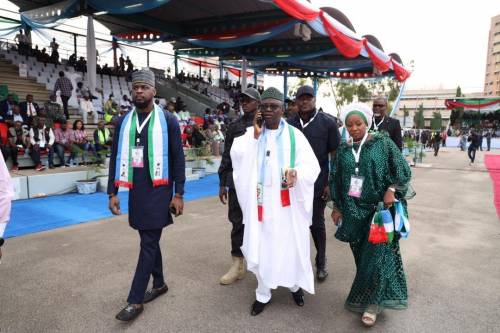 Pastor Tunde Bakare, the founding pastor of the Citadel Global Community Church secured no vote at the just-concluded Presidential Primary of the All Progressives Congress.

Bakare, while addressing delegates and other party members at the Eagle Square in Abuja on Tuesday, insisted that he would not toe the line of some aspirants who had stepped down for a former governor of Lagos State, Bola Tinubu.

He said, “Tonight, I’m no there to step down for anyone, I respect all aspirants and I have wonderful things about them including Asiwaju Bola Tinubu but I am here by the grace of God to step up with the support of the delegates as the 16th president of the Federal Republic of Nigeria.”

Last month, after submitting his expression of interest and nomination forms, Bakare told newsmen that he has all it takes to beat other aspirants.

“My chances are as bright as that of any person. I am eminently qualified either by age or experience or everything that counts in this race. And I trust God that I will emerge the winner,” Bakare had said.

“I carry grace. I carry favour. I carry God-factor. Give me the opportunity to speak with party delegates and you will see what will happen,” Bakare was quoted as saying hours before the presidential primaries. “The president is 15th and I’ll be number 16th.”

However, as the results emerged on Wednesday, Bakare is one of the four aspirants who secured no votes. The other three candidates are former Imo State Governor, Rochas Okorocha, aspirant Tien Jack Rich and Ikeobasi Mokelu, a former Minister of Information and Culture in the military era.

Meanwhile, tweeps have criticised Bakare for calling the name of God in vain after a comment erroneously attributed to him that God asked him to contest and become the 16th President of Nigeria.

A tweep, @Neduzy stated, “One pastor said God told him he will be the next president and flag bearer of the APC. At the end of the day after spending 100m of tithes and offerings to buy form. He didn’t get a single vote. Does it mean that God lied to him?

“Does it mean that God is now the author of confusion? Pst Tunde Bakare stop dragging the name of our God in vain. Stop lying with the name of God, Focus on your church and ministry. God bless you.”