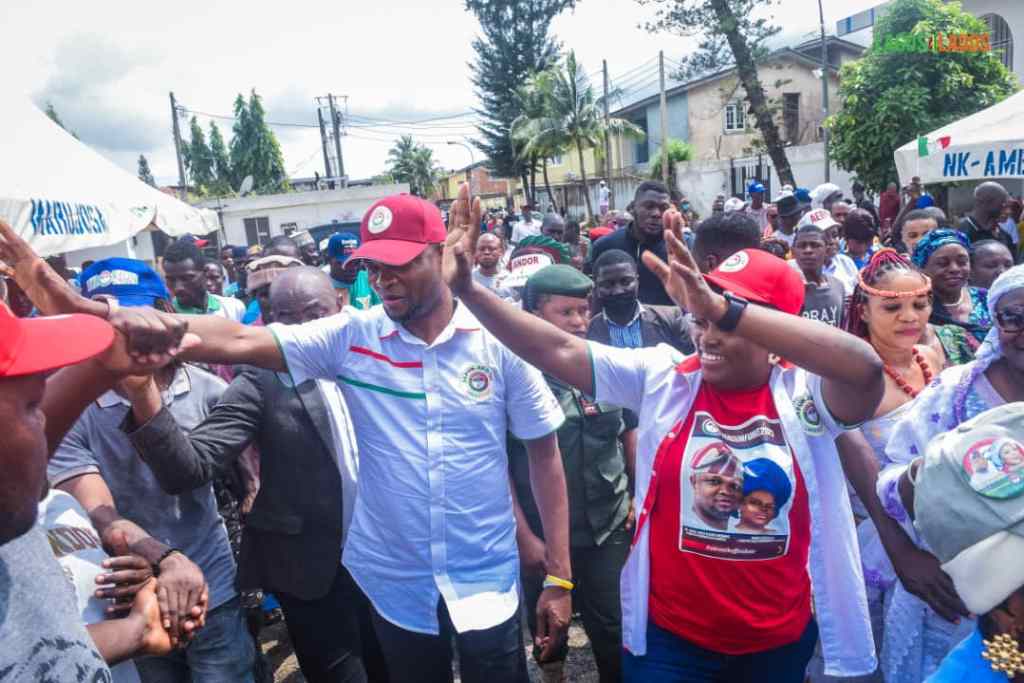 The campaign train of the Peoples Democratic Party (PDP) Governorship Candidate in Lagos State, Dr Abdul-Azeez Adediran (Jandor) is already sending jitter down the spines of the people in the ruling party in Lagos

Adediran and his running mate, Funke Akindele on Wednesday, flagged off a three -day campaign in the Alimosho Local Government area, touring various wards and markets.

The PDP Governorship Candidate on Thursday sought partnership of business owners, non-indigenes and traditional leaders to emerge winner of the 2023 general elections.

While Adediran had continued to hold meetings with critical community stakeholders and groups in the area, Akindele had been touring various markets in the same local government area to seek their support ahead of the 2023 general elections.

The PDP candidate, in an interactive session with the non- indigenes, business owners, trade groups and traditional chiefs in Egbe-Idimu area of Alimosho, promised to safeguard businesses and make Lagos liveable for all.

Calling for partnership, Adediran said that his team was ready to create an enabling for businesses to thrive without closing down any or carrying out anti- people policies.

According to him, non indigenes have contributed immensely towards the development of the state and they will be involved in his administration.

“If we don’t do anything, nothing we change in Lagos than what residents have experienced in the last 23 years of democracy. If God grants me this power, it is for you the people, not me.

“Some of us know your contributions to the state economy in Ladipo and Alaba International Markets and others. Partner with us, and I will create enabling environment for all of you to do your business.

“For us to have been on this journey for seven years, be rest assure that I am ready, give me a chance,” Adediran said.

The candidate said that his team had decided to go through various wards to campaign in Alimosho to see for ourselves what people were going through, saying, ” I never knew we had bad roads like these in Alimosho.”

Earlier at the session,, Chief Emeka Agagwo, a stakeholder in Ladipo Market and leader of non-indegene communities assured the candidate of total support.

Agawuo said: “We are voting Jandor because of his intelligence. We are sure Jandor will fulfill all his promises.”

Also speaking, Mr Isibor Wilfred, the Chairman, Akindele-Coker Landlords Association in the area, said: “We have to support this candidate because he is young, articulate and forthright.

“I have watched his interviews, I don’t know him from Adam but I see a good governor in him. I counsel him to be focus and not to be distracted by anything.”

In her remarks, Akindele told the traders that their only goal of seeking mandate was to serve the people, saying “We will make you happy. We will do it well.”
In another interactive session with the Lagos State Planks and Building Materials Market Association (LSPBMMA), Adediran, who also sought members partnership, promised to run a government for the masses.

“We are going to provide free and compulsory education with free school uniforms. I will partner with you and engage you in school infrastructural development.

“I will buy planks and other building materials from you also in my housing projects.

“We will put money in your pockets when we engage you and you will know that you have a government. I cannot promise you what I won’t do. Whatever I promise you here today, I will do the same,” he said.

He said that he left APC because the party had not made the state resources reflect in the society and lives of the people.

“The two of us, some people refers to as unserious will flush APC out of Lagos State,” he said.

Adediran, who said that his administration would not neglect the association and other business owners in the state, promised not to dash the hope of anyone.

Earlier, Mr Sunday Adeogun, Zonal Chairman of the association, who called for ease and freedom to do business in Lago, said that the association had been disappointed repeatedly by politicians.