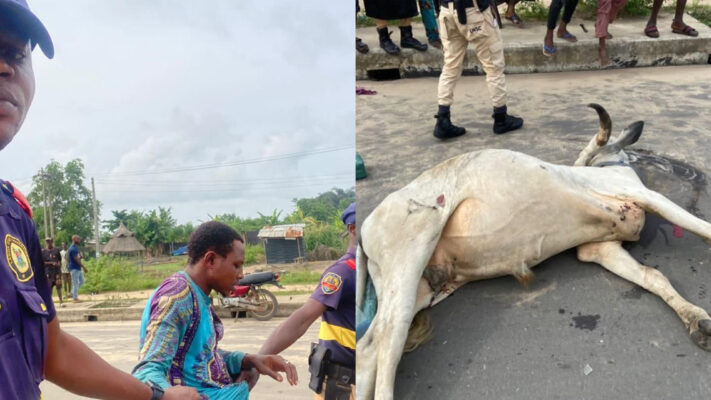 Share 0FacebookTwitterWhatsappEmail
Kindly share this story:
Two herders allegedly stabbed a man to death over the death of a cow in Agemowo, Badagry area of Lagos state.

According to Peoples gazette, the man was stabbed after two cows rammed into a commercial vehicle popularly known as “danfo” on the Badagry expressway, causing the death of one of the cows.

The herdsmen were said to have reacted angrily and stabbed the man identified as Omoga, who died immediately on the spot.

Olushola Padonu, a resident of the area, told our correspondent that officials of the Lagos Neighbourhood Safety Corps (LNSC) handed over the herder to the police.

“The person that was killed goes by the nickname Omoga,” says Mr Padonu, adding that “The LNSC arrested one of the herders. The soldiers and police are at the venue as we speak because the youth are hunting for the Fulani man (second herder)”

“A commercial vehicle ran into two cows this morning at Agemowo, Badagry, killing one of the cows. The two cattle herders attacked someone they mistook for the vehicle conductor, resulting in his death. Angry residents blocked the highway in protest of the killing,” Mr Hundeyin tweeted.

“The DPO, Morogbo Division, assisted by soldiers from 243 Recce Battalion, Badagry successfully cleared the obstruction. Normalcy has since returned to the area. It is entirely false that the victim was turned back when he sought refuge in the police station.

“He did not make it off the accident scene, let alone reach the station. Meanwhile, the two herders have been arrested. Investigation is ongoing. Updates will be provided subsequently.”