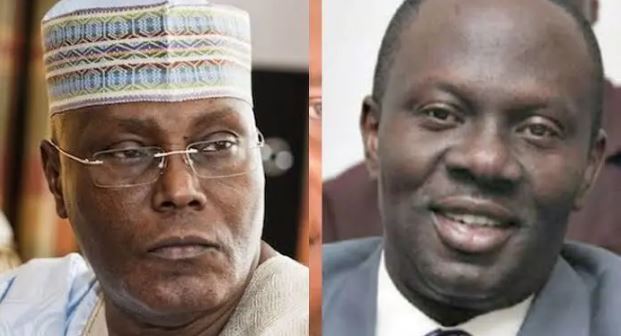 Ahead of the 2023 general elections, a Non-Governmental Organisation, FACE OF WAZIRI-NIGERIA, has described another move by a serial confutionist and belligerent character – Kassim Afegbua to throw brickbat laced with falsehood into the public ratings of Atiku Abubarka as a futile plot, seeing the coast is clear for him to emerge as the preferred presidential candidate of the Peoples Democratic Party (PDP).

The group’s Director-General, Mr Ade Bukky took a swipe on Afegbua, stating in clear terms that his recent misguided and desperate vituperations associating Waziri to any fraudulent activities in time past confirm that he lacks principles and could spew any nonsense once the price is right.

Bukky said that: “Kassim Afegbua in our reckoning is like an Abiku whose bangles cast in vain repeatedly but to no avail, he is really not a factor in molding or influencing public opinions via the media as he is been perceived by his paymasters, who again have oiled his wheel to like a rabid dog bite on impulse, this again is another failed attempt.

“By all parameters and social index available now the only symbol for the restoration of hope, unity, economic rebound, improved world view and holistic positive development in Nigeria is none other than the Waziri Adamawa, Alhaji Atiku Abubarka.

“For the umpteenth time, Kassim Afegbua need be thoroughly upbraided for trying to embark on a fruitless journey of throwing tantrums just to make Waziri lose his sustained tempo, we are not oblivious of the truth on this matter he (Afegbua) is making frantic effort to recalibrate in the public domain, as overtime Atiku’s name has been cleared and adjudged free of link to any fraudulent activities both home and abroad.

“And contrary to his claims, Atiku is a free man whose entry and exit in and out of America remains un-gaged by any legal snags of fraudulent conduct, as several interfaces with concerned authorities over there and even EFCC here confirmed his clean bill-of-health as regard tendencies of fraud.

“At this point, I feel it is right to raise a few posers, that further affirm Afegbua need to have his head cross-examined by medical experts. Is Afegbua now a public analyst solely in business against Atiku? What more lies has he in his kitty to feed the minds of innocent Nigerians? Is it not high time, less attention is afforded to this character devoid of any moral rectitude?

“Waziri Adamawa has over time proved his worth right from his school days, a passionate lover of the people, been a voice for the students via the Student Union back then, he has made sterling and indelible contributions across all duty post where he had discharged his roles smartly and unaided.

“At the Customs and in business he remains an A-flyer with over 100,000 staffers on his payrolls, taking to politics he also was already elected Governor before he was picked to partner Chief Olusegun Obasanjo as Vice President, so his capacity and leadership fecundity are not in doubt.

“‘If wishes were horses even the beggar would have a ride” Afegbua’s outburst is nothing but a figment of his own imagination oozing from an induced source but this and many more won’t stop the wheel of progress in Atiku’s camp, we are certainly more than a conqueror.

The FOW boss, however, urged the public to sieve any information they are been fed by characters like Afegbua, weighing it with that functional measure device of conscience as all points at desperation to scuttle the movement of a divinely positioned personality- Atiku Abubarka.

“As posited by Joseph Campbell, “Wars and Temper tantrums are the makeshifts of ignorance; regrets are illuminations that come too late”.

“Afegbua’s regret lately is that he has fallen out of favour with someone whose time of glory is near and it is well understood but he should desist from making unfounded claims, at least he should think of posterity,” Bukky said.

He maintained that for Afegbua who was Atiku Abubakar presidential campaign organization’s spokesman before now embarking on this campaign of calumny, smacks of desperation.

“The Jennifer saga is clearly spurious and need be ignored in its entirety, no queries of financial impropriety could be traced to Atiku as he has been clearly absolved of it all.

“As against the rule of law, justice and transparency ambassador toga Afegbua intends to wear with his recent malicious and scandalous claims, he passes off as a greedy blackmailer in the minds of clear-headed individuals to whom his claims lack the weight of sincerity.”Bukky reiterated.