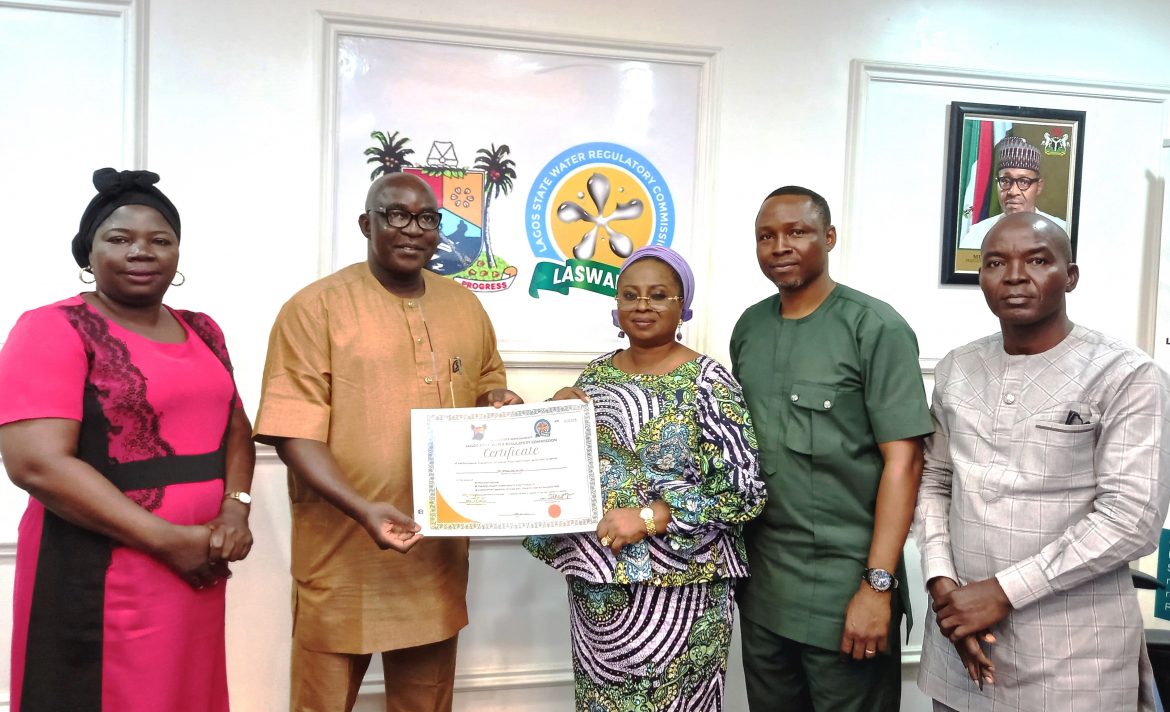 The Commission, in its regulatory role, issues drilling licenses to commercial borehole/water well drillers, rig owners and practitioners water abstraction licenses as a form of regulation for groundwater management, especially considering the environmental impacts and health of residents.

Executive Secretary of LASWARCO, Mrs. Funke Adepoju who presented the license and permits to the management of the hotel at the Commission’s head office in Alausa, said the development followed the willful compliance of the service provider to water governance laws, adding that the water being produced by the hotel is fit for human consumption.

“The official presentation of regulatory licenses and permit to Eko Hotels and Suites Limited is in recognition of the regulatory compliance of the state’s guidelines on the regulation of groundwater and delivery of WASH (Water, Sanitation and Hygiene) services.

“The management of the hotel has clearly demonstrated that it remains resolute in complying with the state’s regulatory guidelines by obtaining the necessary permits and licenses as required by law. Today’s presentation is, therefore, apt to serve as an award and acknowledgment of compliance and to incentivize other players in the sector,” Adepoju said.

She said the present administration under the dynamic leadership of Mr. Governor, Babajide Olusola Sanwo-Olu remains committed to creating a conducive atmosphere for businesses to thrive, while also ensuring that operators in the WASH sector continue to comply with regulatory guidelines to safeguard the health of residents and secure the environment.

“You will recall as COVID-19 palliative to cushion its effect on businesses, Mr. Governor, in his magnanimity, approved a waiver of all charges up to December 2019 and a concession of 75 percent per liter on water abstraction charge, as well as a significant reduction for commercial/industrial borehole permits,” she said.

Responding, the Company Secretary/Legal Adviser of Eko Hotels & Suites Limited, Chief Samuel Alabi said the resistance put up by some stakeholders against regulatory efforts of the state government was due to ignorance, saying the government cannot but regulate the sector in the best interest of all.

Alabi, who is also the President of Hotel Owners and Managers Association of Lagos State (comprising affiliate bodies of All Hoteliers Association and Association of Fast Food and Confectioners of Nigerian), as well as a member of the Governing Council of Nigeria Employers’ Consultative Association (NECA), said his organization was fully in support of the regulatory initiatives of the state government for the WASH Sector as championed by LASWARCO.

“If the government is irresponsible, the consequences of an unregulated water regime will reflect directly on an increase in the health budget. It is, therefore, compulsory for a responsible government to regulate water abstraction, production, and even distribution. It is in this regard that our company recognizes and stands firmly with the regulatory efforts of Mr. Governor as represented by the able and dynamic Executive Secretary of LASWARCO,” Alabi said.

He also encouraged the state government to come up with more programs on knowledge sharing and advocacy to educate industry players and the general public on water regulation and other WASH laws for proper understanding and buy-in of the stakeholders.