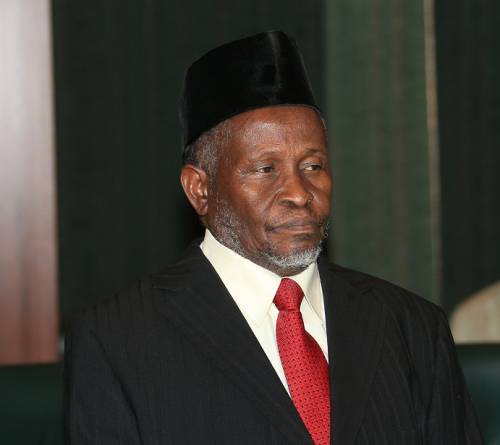 Share 0FacebookTwitterWhatsappEmail
Kindly share this story:
The immediate past Chief Justice of Nigeria, Ibrahim Tanko Muhammad, is expected to get a N2.5bn severance package from the Nigerian government, despite the so-called probe of alleged corrupt practices of his time in office.
Tanko’s resignation was announced on Monday, less than a week after the 14 Supreme Court Justices accused him of financial malfeasance and maladministration.
Following the development, President Muhammadu Buhari swore in Justice Olukayode Ariwoola, the next most senior Justice as the acting CJN.
As part of the package for the retired chief justice put together by the National Judicial Council, a mansion will be built for him in Abuja or any city of his choosing with a lump sum for furnishing, PUNCH reports.
This is in addition to a gratuity that is 300 per cent of his annual basic salary of N3.36m as well as a pension for life.
The National Judicial Commission had in 2019 recommended the payment of N2.5billion for Muhammad’s predecessor, Walter Onnoghen.
A former CJN, Alfa Belgore, was also reportedly paid about N2.8billion after he retired from service.
Just like state governors, a retired chief justice is entitled to at least four domestic staff and sundry allowances for personal upkeep.
This includes allowances for accommodation, utilities, entertainment, medical, security, furniture, and vehicles.
Though the remuneration and severance package of political, public and judicial officers were published on the website of the Revenue Mobilisation Allocation and Fiscal Commission, the full details of the allowances were not disclosed.
The former CJN would get the financial package based on the provisions of Section 291 (2) and (3a-c) of the 1999 Constitution as well as Section 2 of the Pensions Rights of Judges Act.
This is as the Senate Committee on Judiciary, Human Rights and Legal Matters on Tuesday received a fresh order to probe the newly retired CJN over the allegations of corruption levelled against him by 14 Supreme Court Justices.
President of the Senate, Ahmad Lawan, mandated the Committee led by Senator Opeyemi Bamidele to probe the allegations against the CJN and the crisis presently rocking the judiciary.
Announcing the probe of the former CJN during plenary on Tuesday, Lawan recalled that on June 21, he drew the attention of the Senate to the media reports on the state of affairs in the Supreme Court where Justices of the apex court in a petition raised issues bordering on deplorable welfare conditions and difficult working environment, which was addressed to the CJN and Chairman, National Judicial Council.
He emphasised the need for the Senate to urgently step into the matter as any issue that concerned the judiciary was of urgent national importance that the Senate could not afford to sit idly by and allow it to spiral out of control.
Kindly share this story:
Share 0 FacebookTwitterWhatsappEmail
previous post