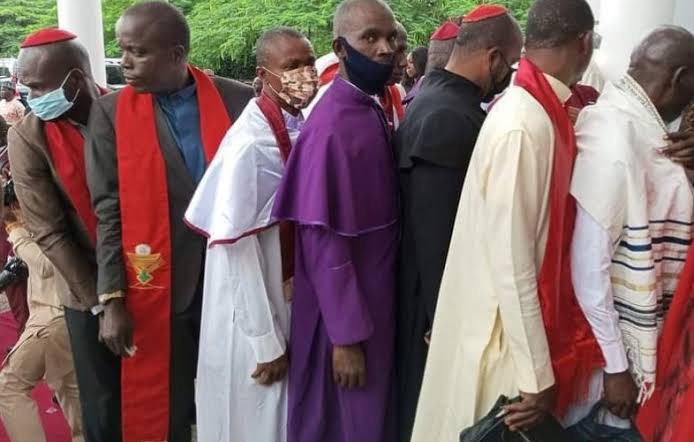 The Christian Association of Clergies in Nigeria has begun the issuance of identification numbers to all Christian clerics in the country. The group said the appearance of some person’s in bishopric regalia during the unveiling of the All Progressives Congress vice presidential candidate, Kashim Shettima, in Abuja recently informed the decision.

It said the reactions generated by the development and the embarrassment it caused the Christian Association of Nigeria made it important to begin to issue identification numbers to all Christian clergies in Nigeria for easy and proper identification.

The CACN National Coordinator, Justice Alpha Ikpeama, and the National Secretary, Bishop Joseph Ajujungwa, disclosed this in a joint press statement made available to journalists in Onitsha, Anambra State, on Wednesday.

They said the exercise would be done in collaboration with the Bible Family Christian Media also known as the Bible Media, a global Christian research and publicity network.

The statement read in part, “We are commencing the enumeration of clergies in the country. This is a measure to serve as a guide for ministers’ information, as a compendium for the accessibility of information; thereby offering avenues for partnership and data-bank information generation exchange.

“It will also function as a unifying platform for the body of Christ and serve the purpose of globalisation.

“This idea was muted after the clergies reflected and shared their views on the state of affairs and false approach in Christianity. We now promised to embark on moves toward a rescue mission for the state of Nigerian churches/ministers.

“This would be done in collaboration with the Bible Family Christian Media also known as the Bible Media, a global Christian research and publicity network to substantiate the supremacy and authority of the Holy Bible.

“All the professional bodies, particularly the Nigerian Bar Association, even the native doctors are being identified with identification numbers, CACN, therefore, call on all concerned bodies to cooperate with the clergies and the Bible Media to actualise this noble mission which would be done under each Christian bloc, while a six-month period would be given for accomplishing the same.”