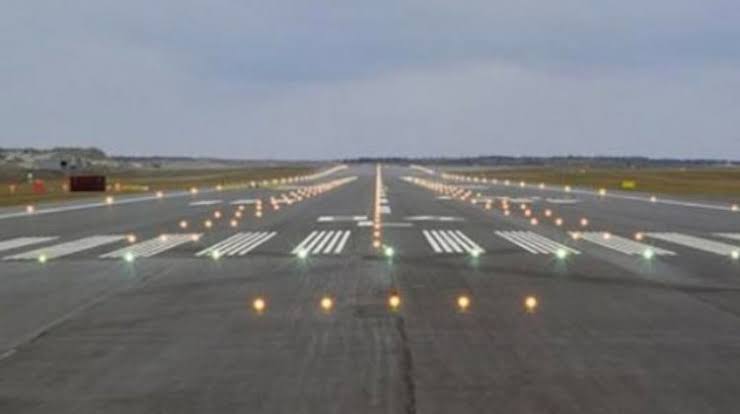 Share 0FacebookTwitterWhatsappEmail
Kindly share this story:
The Management of Federal Airports Authority of Nigeria (FAAN) in Lagos was thrown into confusion after suspected vandals sneaked into the airside of the Airport at night and cart away  N100m worth of armoured cables at the runaway.
This incident happened at Muritala Mohammed International Airport in Ikeja, Lagos.
The airport was reportedly thrown into darkness, while the passengers boarding flights to travel and the FAAN were said to have been in panic mood for several hours before an alternative power supply was eventually provided.
Following the embarrassment suffered by both the FAAN and the security agents at the airport over the  dastardly act, the man behind the total blackout, Chike Ogoke, was later arrested after intensive manhunt for the suspects.
During interrogation at the Airport Police Division, the 35-year old Ogoke reportedly confessed and mentioned one Eze, who is still at large as his accomplice but did not disclose how they managed to gain entrance to the restricted area where the cables were located.
Having been found culpable, the Police charged him before the Court for conspiracy and stealing while his accomplice was said to be at large.
The  incident, which really embarrassed the Staff of FAAN, also rattled the Police on how the suspects managed to gain entrance to the area where the cables were located inside the Airport without any trace that night.
The Police at the Airport Division alleged that the suspect, Ogoke, conspired with one Eze, now at large, endangered lives of the air travellers by unlawfully entering the restricted area of the airport, dug ground and cut off the armoured cables, which supplied power to the airport runaway worth the said amount of money.
He was subsequently arraigned before the Ogba Magistrates Court for the alleged offence and he pleaded not guilty.
The prosecutor, Inspector Mathew Ikhayyera, asked the Court to give a date for hearing since he pleaded guilty before Court to enable the Police to prove that he actually committed the alleged offence.
The Presiding Magistrate, Mrs. Folashade Hughes, granted him bail and ordered his remand in the Correctional Centre at Kirikiri town, Lagos, pending when he will perfect his bail conditions while the matter was adjourned for mention.
Kindly share this story:
Share 0 FacebookTwitterWhatsappEmail
previous post