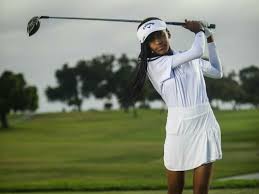 The statement read, “The President salutes the achievements of the youngster, who currently tops the junior player cadre in Nigeria, and has been credited with over 20 medals since she won her first medal at the age of five.

“President Buhari joins all Nigerians in celebrating this great teenager, who is doing so much for the country by demonstrating that hard work and determination pays, wishing the golfer more spectacular success in her career.”