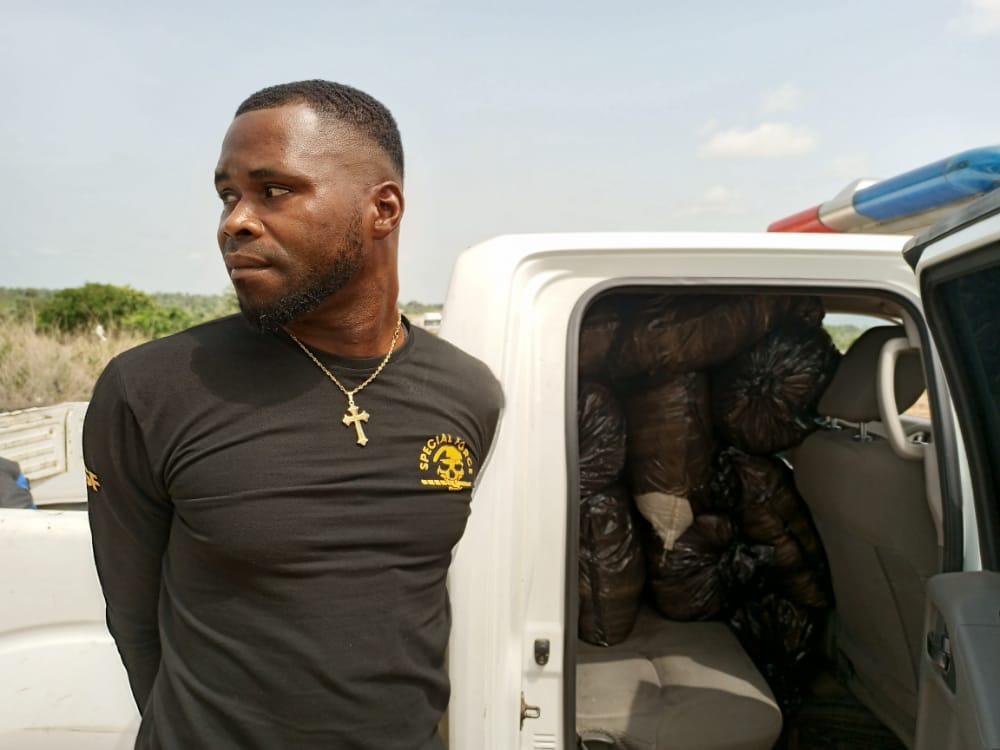 Operatives of the National Drug Law Enforcement Agency, NDLEA, have intercepted 24 parcels of cocaine concealed in 12 tires of lawnmowers imported into the country through the Port Harcourt International Airport, PHIA by a Brazilian returnee, Okechukwu Francis Amaechi, who has just finished serving his jail term for drug trafficking in the South American country.

The 45-year-old ex-convict from Idemili South LGA, Anambra State was arrested at the Port Harcourt airport on Saturday 7th May upon his arrival from Brazil via Doha onboard Qatar Airline flight QR1433.

Preliminary investigations revealed Okechukwu who was arrested and convicted in Brazil for drug offenses completed serving his jail sentence in March 2022, after which he decided to return to Nigeria with three new lawn mowers where he concealed 24 parcels of cocaine weighing 4.56kg.

Curiously, each parcel concealed in the tires of the three lawnmowers bears some unique inscriptions, which are believed to be means of identification of the owners of the drug.  The two parcels in one of the tyres of the first lawnmower bear “O LORD” and “HAVE MERCY”.  The parcels in one of the tyres of the second mower bears the inscription “IN GOD” and “WE TRUST”, while the third mower has “IJIOMA” and “186.6” inscribed on the two parcels hidden in one of its tyres.

Okechukwu claimed one of his church members gave him the lawnmowers to deliver to his brother in Port Harcourt.

In other operations across Zamfara, Kogi, Rivers, Kaduna and Kano state, no fewer than 37, 876 tablets of pharmaceutical opioids especially Tramadol; 10,884 bottles of codeine and 825.016 kilograms of cannabis Sativa were recovered during raids in the past week.

In Zamfara state, a Mercedes Benz truck with reg. no. XB 986 AGB from Onitsha to Sokoto was intercepted in Tsafe area on Friday 20th May. Apart from the driver and his assistant that were arrested, three other persons: Alex Chukwuemeka, 37; Ignatius Mokwe Odikpo, 47 and Andrew Chijokwe, 47 who are owners of the drug exhibits were arrested in a follow-up operation at a hotel in Gusau while waiting to receive the consignment for possible movement to Sokoto. Seized from them include 9,900 bottles of codeine, 599.3kg cannabis and 15,889 tablets of other opioids.

In Kogi state, a fake security agent, Richard Agada was arrested on Wednesday 18th May while conveying 10 bags of cannabis Sativa weighing 116.8kg in a white Nissan van. Various quantities of opioids and cannabis were equally seized in two separate operations the previous Tuesday and Monday in other parts of the state with the arrest of a drug dealer, Ayuba Nda Isah, 32.

Three suspects: Nornu Abanne; Yirakpoa Emmanuel and Dornu Gbarazia were arrested at Kaani community and Bori with 90kg cannabis and 1.5gram of Cocaine on Wednesday 18th May.

In Kaduna, three suspects: Nura Salis, Bawa Musa and Charity Jacob were arrested on Tuesday 17th of May at Warri Street within the state capital with 4,900 tablets of Tramadol, 890 ampoules of Diazepam injection, 257 ampoules of pentazocine injection, 1,950 tablets of Nitrazepam and 830 tablets of Carbazapine.

Equally, in Kano state, a drug dealer, Abubakar Abdullahi, 47, with 5,970 capsules and tablets of Tramadol was arrested, while Nasiru Musa and Musa Mohammed were also nabbed with 5,000 caps of the same drug on Tuesday 17th May.

While commending the officers and men of PHIA, Zamfara, Kogi, Rivers, Kaduna and Kano commands of the Agency for the arrests and seizures, Chairman/Chief Executive of NDLEA, Brig. Gen. Mohamed Buba Marwa (Retd) said the war against drug abuse and trafficking is one that must be won. He, therefore, charged all commands of the Agency to remain on the offensive against the cartels as they take advocacy messages to communities and schools.