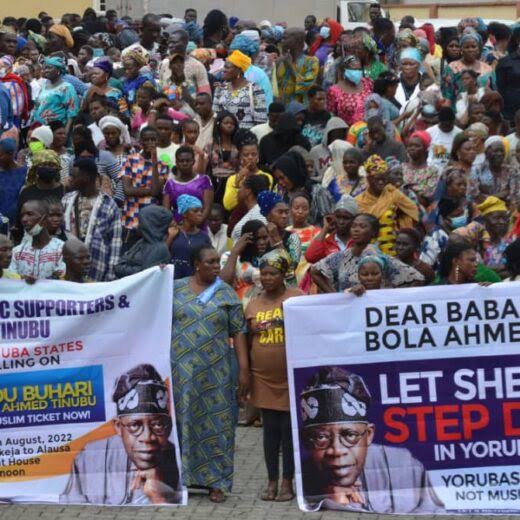 Some stakeholders and supporters of the ruling All Progressives Congress on Monday took to the streets of Lagos to protest the party’s stance on the contentious Muslim-Muslim ticket.

The demonstrators, under the aegis of the Coalition of APC Stakeholders Network and Southwest Supporters of Tinubu, began their peaceful walk from the popular Shoprite Shopping Mall in Ikeja to the State House in the Central Business District area of Alausa.

Chanting solidarity songs, the protesters walked through the heavy traffic created by the demonstration while displaying several banners that read “Dear Baba Asiwaju, Let Shettima Step Down in Yoruba interest,” “President Buhari and Tinubu should rethink Muslim-Muslim ticket,” and “Tinubu, replace Shettima with Christian VP to balance the ticket.”

The development is coming barely one month after a similar protest rocked the APC secretariat in Abuja.

Addressing journalists in front of the State House in Alausa, the group’s President-General, Samuel Arokoyo, disclosed that the only obstacle between APC presidential candidate, Asiwaju Bola Tinubu, and the presidency in 2023 is his choice of running mate, Senator Kashim Shettima.

According to him, many of his supporters including those in the South West, were shocked that Tinubu opted for a fellow Muslim to become the vice-presidential candidate.

He said, “As a multi-religious and multi-ethnic country, any attempt for one religion to dominate the political structure could only widen the gap of mistrust and destroy the delicate sense of tolerance cultivated over the years.

“This is why the choice of Shettima was not only ill-timed but a total disregard for the diversity of the country, crushing the bridges built to connect the religious differences and promote ethnic harmonious co-existence.”